This week’s PMA virtual town hall focused on technologies that work to reduce food waste. Ed Tracy, PMA’s Vice President of Supply Chain and Sustainability, explains: “More and more consumers are looking to support brands and organizations whose goals align with theirs. Among the values they look for is an emphasis on sustainability, specifically the reduction of food loss and food waste. In the US, government figures show that the total food loss and waste is between 30-40%, or 219 pounds per person. The number is much higher in less affluent countries, where the food loss, which is the food that is lost between the time that it is packed until it arrives at its final distributor such as a retailer or restaurant, can be as high as 50%.”

The panel consisted of Jessica Vieira, Senior Director of Sustainability at Apeel, Patrick Flynn, Co-founder and the Chief Marketing Officer at Hazel Technologies, Bill Belias, the Chief Technology Officer at SoFresh Inc., and Melissa Hartwick, Director and Head of Partnerships at Flashfoods Inc. 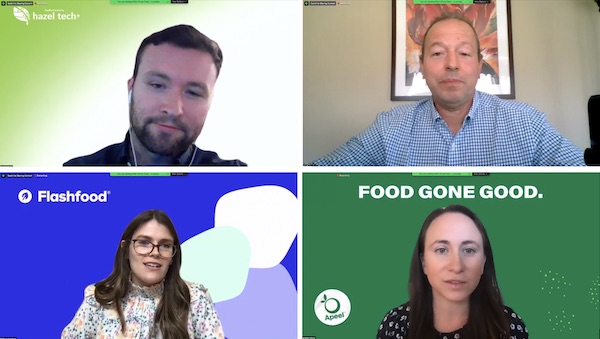 Reducing waste post-harvest
The first technology discussed was Apeel. “Our goal at Apeel is to work together with nature to reduce waste and create abundance for all,” Vieira shares. Apeel fortifies the product’s natural protection barrier: the peel. “We have developed a plant derived coating that is applied to fresh fruits and vegetables which slows down the rates of water loss and oxidation, which are the 2 primary causes of spoilage. After application, it stays on the peel until it is eaten by the consumer, so it brings efficiency and extra time to each step of the supply chain. Products like avocados, citrus, apples and cucumbers last twice as long with Apeel. Cucumbers are a special case. They already have a technology that helps extend their shelf life: the plastic wrap. By exchanging the plastic wrap with Apeel, you can keep the product’s optimal shelf-life while reducing plastic usage,” Vieira explains.

The effects of food waste go beyond the loss of food. When food is wasted, so are all the inputs that went into producing that product, from water to labor to packaging supplies. Vieira shares: “Reducing food waste has been identified as the number one solution to reducing greenhouse gas emissions. By reducing food waste, you are also reducing all the environmental impacts that go along with it. According to our data, when using Apeel on avocados, for example, 720,000 liters of water use is avoided for every load of avocados treated with Apeel. Similarly, 1.4 metric tons of the CO2 equivalent of greenhouse gas emissions is avoided for that same load.”

Technology for the packaging process
Hazel Technologies has developed a small sachet that is added to the boxes of produce that works to extend shelf-life. Flynn shares: “In 2015, the company’s founders discovered a new technology for slowly releasing vapor from natural, solid materials. This technology is a lot less cumbersome and a lot more functional than traditional shelf-life extending solutions. It can be used in any box or packaging style at any time during the supply chain.”

Founded in 2015, Hazel Technologies has seen rapid growth in the past years. “Our innovation is now being used by more than 160 of the world’s largest growers, packers, and retailers of fresh produce. As of 2020, we have protected 5.1 billion pounds of produce and we plan to beat that number in 2021,” says Flynn. He explains that there are several key reasons for the company’s rapid expansion: “The technology is extremely easy to use, which is a big draw for many: just add the sachet to the packaging box. There is nothing to install, no extra expenses or alterations to current processes. The product itself is also sustainable because the contents of the sachet are biodegradable. For every unit of carbon we use to make our products, we save about 5,000 units of carbon by reducing food waste,” Flynn explains. The Hazel Technologies solution has received four separate USDA grants and has been verified by more than ten prestigious ag-extension universities across the globe.

Mold-reducing packaging
SoFresh Inc. has developed a technology that puts mold to sleep using natural vapors. Belias explains: “Mold spores are everywhere, and even after the produce is washed or treated with chemicals, the spores remain active and will start growing as soon as they are in the right condition. It is a natural phenomenon, but it creates a real challenge for food producers. Previous approaches focused on killing mold by using harsh chemicals that take down the cell walls, but our approach is much less invasive and much easier to use. We gently apply a vapor that permeates the mold spore and prevents the digestion of sugars that molds need to be able to flourish. As long as a minute amount of our vapor is present, the mold will not be able to thrive; we don’t kill the mold, we put it to sleep.”

Reducing food waste at the retail level
A lot of food waste happens at the retail and consumer levels. Hartwick shares: “Grocers throw out about 26 billion pounds of perfectly good food around the world. At Flashfood, we have created an app that notifies consumers that there are foods at their local stores that are nearing their ‘best-by’ date. The grocers are able to post their ‘Flash deals’ on the app. For loose produce items, produce boxes are created that are 5 pounds for $5. After it is posted on the Flashfood app, shoppers in the local area will get a notification and they can select and pay for their products on their phones. Then, they go to pick it up in stores in the ‘Flashfood zone,’ which is located near the customer service desk and typically has a double door cooler and a dry rack.”

In addition to helping reduce food waste, using this app also has other benefits for the grocery stores. “One out of four shoppers will try out a new grocery store just to take advantage of the Flash deals there, and shoppers who came in for a Flash deal will likely spend 1.5 times as much money as they spent on their deal in the grocery store,” Hartwick says. The app is being used in over 1,000 stores across North America and the company is working on pilots to expand their presence even more.

Next week’s virtual town hall will take a close look at the performance of organic produce in the past year and what we can expect to happen with this category in the future.