The widespread use of protective tunnels for strawberry production in the UK has helped significantly reduce the incidence of grey mould caused by Botrytis cinerea. But their use has led to a corresponding increase in the incidence of powdery mildew in the crop. The warm, dry, but humid conditions that prevail under tunnels prove ideal for infection and spread of Podosphaera aphanis, the pathogen that causes powdery mildew.

A computer-based model developed by NIAB EMR uses temperature and humidity data to predict the risk of powdery mildew infection in strawberry. It has not been widely used by growers as it requires extra work to set up. 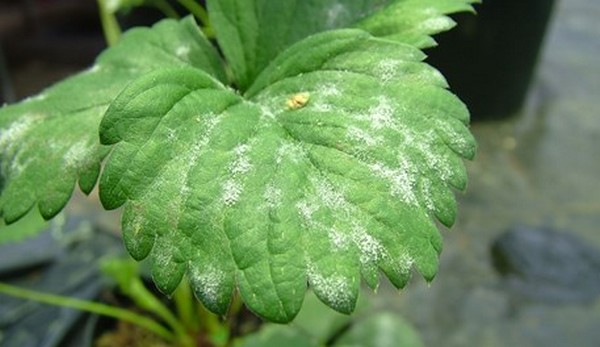 Initial work identified that the biological control agents Sonata (Bacillus pumilus) and AQ10 (Ampelomyces quisqualis) were as effective at controlling powdery mildew as standard fungicides; applied either alone or in combination with fungicides. A ‘managed programme’ made use of a simplified version of the mildew risk monitoring tool using forecast temperatures and humidity from BBC weather data. It also involved routine monitoring of the crop for early symptoms of powdery mildew.

Before mildew risks occurred, no sprays were applied to the ‘managed programme’. When low-risk periods developed, the biofungicides Sonata or AQ10 were applied as protectants – neither product has curative properties. Where early symptoms of powdery mildew were found, conventional fungicides with eradicant properties were used. This ‘managed programme’ was compared to a routine seven-day fungicide programme on an everbearer that was very susceptible to powdery mildew.

In high-risk seasons when the weather was favourable to powdery mildew, the ‘managed programme’ used only half the number of sprays as the seven-day fungicide programme. This saves on costs, reduces the risk of fungicide residues and leaves the permitted numbers of fungicides for control later in the season when disease pressure is higher.

The simplified model using BBC weather, or other data, can be used. Alternatively, another commercially available computer-based mildew risk monitoring tool developed by the University of Hertfordshire is available. To use the managed programme, it is essential to recognise young mildew colonies on leaves or fruit and carry out regular mildew monitoring.

Trialling a managed programme
I would encourage you to employ the disease risk model, weather forecasts and routine mildew monitoring in a managed programme in a small crop area. You can then compare the results with a routine seven-day fungicide programme.

If you don’t wish to try this, it might be at least worth trying the use of Sonata or AQ10 as protectant products within a routine programme. In the trials, when Sonata was used alone, it was mixed with Silwet, Slither or similar adjuvant. When mixed with other fungicides, no adjuvant was used.