There are approximately 20,000 women who are full owners of family farms in Kansas today, a number that has steadily risen for more than half a century according to the USDA's National Agricultural Statistics Service (2017). There are another 10,000 or so who are partners in family farms or visible tenants. This means 36 percent of all producers are female and 56 percent of all farms have at least one female decision-maker. Collectively, these industrious agriculturalists operate
20,000,000,000 acres. Their land makes up around 40 percent of the farm acreage stretching across the sun-drenched fields of the Sunflower State. Their numbers are growing like weeds.

How and why have so many women become farmers in Kansas?

With 96 percent of America’s farms family owned and the average farmer’s age approaching 60, there are natural leadership and ownership transitions happening in Kansas and across the fruited plains. The next gen farm is more and more likely to have a woman making the big decisions. This is precisely the case for Alisha Mawhirter who owns and operates 4 Star Hydroponics in St. John,
Kansas (pop. 1,390). 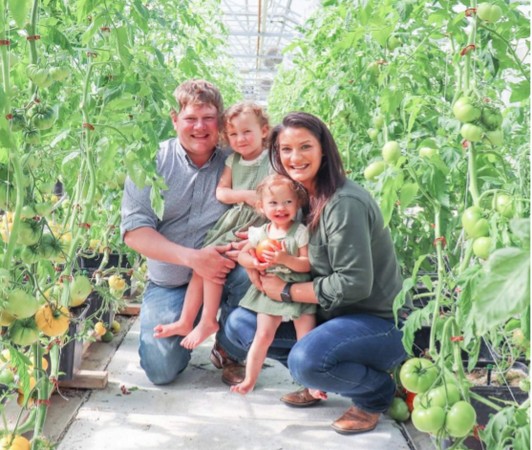 Alisha grew up on a traditional farm near St. John where her family still cultivates 2,000 acres of cash crops each year. Alisha was lured to hydroponics and the ability to become her boss as a small business owner (SBO) when she approached the founder of 4 Star Hydroponics, Rita Taylor, and purchased the well-reputed greenhouse in 2019. The genuine, goal-oriented go-getter Mawhirter said, “I like being an entrepreneur and having my own business. It fits me well. It’s who I am. I knew I wanted to get into hydroponics. I love growing food and produce and love the idea of providing people with the highest quality stuff we can grow. I take a lot of pride in that.” It clearly shows in the customer service her family offers and the repeat demand for her goods.

Unlike many others with fathers and grandfathers who are or were farmers, Mawhirter said her dad was especially receptive to her branching out on her own, getting established, and being involved with
more contemporary agriculture practices like growing tomatoes indoors with hydroponics. Mawhirter says her father was and is very supportive. She goes on about her dad, “He’s an entrepreneur. He’s
forward thinking and open-minded. We’re both visionaries, dreamers, and optimists. The biggest thing he taught me is to embrace failure, which is not easy, and not be too hard on yourself. Keep moving forward. He told me, ‘don’t let anyone ever tell you that you can’t do it
because you’re a female. Go after it wholeheartedly.’ That’s what I do.”

By Anne Amoury and Lenny Geist