"A Dutch greenhouse 150 kilometers away." That's how Ies Bos describes the British high-tech pepper greenhouse he's currently working in. As a former grower he's currently setting up bell pepper projects abroad and when he returned home after seven weeks on location in the United Kingdom, he sat down with our Dutch editors for an interview on the status of the project, which is about to go into production. "We started late and the plants are now growing explosively," he says. 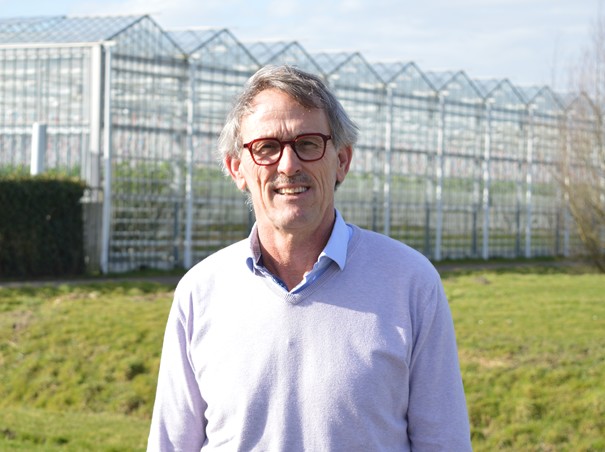 After seven weeks in the UK, Ies was back in the Netherlands for some time late February

To the UK
For Ies this is not the first project in which he is actively involved. After years of being a tomato grower and later a bell pepper grower himself with his own greenhouses, he recently got into project supervision by chance. It started in New Zealand, where Southern Paprika Limited asked for his help to convert the large amount of light there into large yields of peppers. One year later, in 2015, Gemüsebau Steiner followed in Kirchweidach. And when they had successfully established a bell pepper yield using geothermal heating, the next project already followed with Reichenspurner Hof in Tussling in southern Germany. "2018 was my first year here. However, when in 2019 ToBRFV came up, visiting the greenhouse became impossible."

Yet Ies, who in the meanwhile also assisted a colleague in a greenhouse in Bleiswijk, was not 'without a project' for long. In late 2019, he was asked to help set up a project in the United Kingdom. Although the original plan there, to grow peppers, fell through because it was decided to grow cucumbers and tomatoes, this project turned out succesful in the end.

Wastewater heat
And what a project it is. The project that Ies is now helping to start up is for Abbey View Produce and has received national and international attention through greenhouse builder Bom Group. Not surprisingly, since both the size and the techniques used are unique for the UK. The use of heat from a nearby wastewater project, for instance, stands out. "Using the most modern techniques, water  from 24 to 52 degrees Celcuis is raised here," Ies explains. "This is sufficient to heat the greenhouse in 85% of cases. A step towards sustainability, therefore, whilst the boiler or CHP can still come to the rescue if it gets really cold."

Two locations are involved, both owned by Carbon Farming Limited, the client. In a greenhouse in Norwich, Dutch growers will be growing.  Ies is helping the British grower to successfully grow peppers on 12.7 hectares in Bury St. Edmunds. Abbey View Produce, a British trading company, will market the products. With the new greenhouse, the UK is taking a step toward becoming less dependent on imports.

But obviously, before that happened, the plants had to be planted. This moment was celebrated, on January 28 by Ies with all employees on the project and all parties involved in the construction. "It was a joyous moment," Ies looks back. He went to the UK for the first time in November, and came back just in time for Christmas ("I was on the last boat back"). He was then 'stuck' on site full time for seven weeks until the end of February. This was a more or less conscious choice, by the way. "It's quite a lot of hassle at the moment with testing and travel. You have to be retested every time."

The first plants being moved into the greenhouse.

The fact that he was on site full time during an important phase of the start-up, instead of ten days in a row and then four days back, did have its advantages. "I could now put a lot of equipment into operation myself, whereas normally people would have had to come from the Netherlands to do that. With a good deal of basic knowledge and some digital help from a distance, this went very well. I also spent a lot of time with the operators of the wastewater plant to teach them what the grower wanted. The grower doesn't want 52 degrees of hot water in the greenhouse all the time, he wants to be able to control it. After all, the climate has to be right, and that's a very delicate factor.

As with all projects, Ies and the team had to deal with 'challenges', as they say. "In the beginning, the complete heating system was not yet connected to the Priva. So we had to convert the taps and valves manually. At that time we first had rain and then frost, so that was quite stressful. Especially when the plants, worth a million euros, were moved into the greenhouse. Fortunately, I have learned to keep calm during previous projects. At Steiner's, we also had to overcome obstacles and we were sometimes without geothermal heating for a week. That always turned out fine, too, because the greenhouse, as I found out, always stays at around four to five degrees Celsius."

Good for everyone
As is well known, with more homegrown cultivation, the United Kingdom wants to be less dependent on imports. It's a familiar development, which doesn't have to be negative for Dutch growers, according to Ies. "In Germany, I saw that as soon as the projects I was involved in started to run, the supermarkets that were not supplied by those growers started to adjust the filling of the shelf to the new standard. I expect that to happen here in the UK as well once we are in production. I believe that if you grow peppers well abroad, you create more of a market for them. That's good for everyone. And if there happen to be shortages, then they will still come to the Netherlands and Belgium to buy extra.

At the location in Bury st Emunds, it was decided to grow three colors: 5.4 hectares of red, 2.5 hectares of yellow and 4.7 hectares of orange. "And we might even harvest green depending on how the crop grows."

The choice for three colors also has labor advantages. "I work with mostly Romanians here, just like I did in Germany. So I already speak some Romanian," Ies laughs. "Because of the three colors, the peaks in labor are less high. We started later here, but eventually we decided to sow on 5 December. This was important in order not to miss out on the spring prices, especially when the sowing date had already been pushed back several times. We are about to get off to an explosive start. I try to prepare everyone for that in advance and I remind them that we have to be well rounded every week to stay ahead of the growth of the plants." 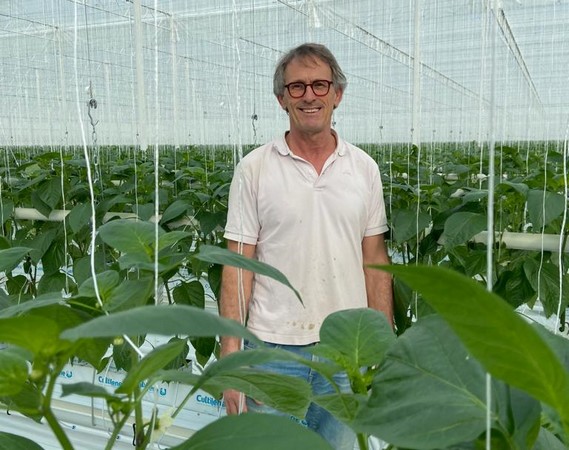 "Here they make the move from growing in greenhouses from the 1980s to the most modern high-tech in one go."

Baby
Staying ahead of the game also applies to pest control. "Just like in Germany, here in the UK you have even fewer corrective tools. The goal is to grow biological controlled year-round. Because we work in a rural area with a lot of potato cultivation, among other things, aphids will definitely come. That's why are strongly committed on prevention, so that in the first four months we can start building up the integrated pest control programs."

How long Ies will remain involved in this project is not yet clear. Just as it is again a question of how long Ies, after leaving for the UK again in early March, will stay on location this time. "Every time you come back, it's still exciting how things are going. Fortunately they already have a good head grower here. Teaching people to how cultivate remains special. In the meantime, a project like this slowly becomes your baby. That remains a wonderful experience, although I fortunately also can let it go when I get home again."