McCain Foods Limited has made a substantial investment in TruLeaf Sustainable Agriculture and its wholly owned subsidiary GoodLeaf Farms, Canada's largest commercial vertical farming operation, to help drive the company's growth and expansion plans. "With this investment, GoodLeaf Farms is embarking on an aggressive growth and expansion plan to build a national network of vertical farms that will bring fresh, delicious, nutritious and locally grown leafy greens to Canadians across the country," they say. 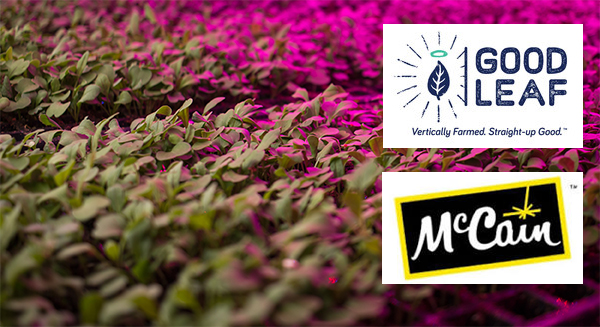 With the $65 million investment in GoodLeaf, McCain is the single largest shareholder in the company. "From our start in Truro to our first commercial farm in Guelph, GoodLeaf has built a strong foundation for future growth," says Barry Murchie, Chief Executive Officer of GoodLeaf. "We want to be a global leader in vertical farming. Our first step to accomplishing that is ensuring we have a strong footprint in Canada, giving Canadians access to top quality, nutrient-dense, sustainably grown and pesticide-free leafy greens 365 days a year."

By the end of 2021, GoodLeaf is planning two more indoor vertical farms — one to serve the grocery and food service networks in Eastern Canada, and one for Western Canada. Exact locations will be announced shortly.

"It is our intention to build farms that support the Canadian grocery store network, food service industry and consumers," says Mr. Murchie. "We want to change what people are eating by providing a fresh, healthy and local alternative that, until now, hasn't been available in Canada. We are driving a new way to grow food, with disruptive technology that brings consumers leafy greens from their own backyard. This is a fundamental game changer."

"At its heart, McCain is an innovative agricultural company," says Peter Dawe, McCain's Chief Growth and Strategy Officer. "This is why we're excited to support the growth and scale up of this Canadian start up that lives at the intersection of food, agriculture and technology. GoodLeaf's vertical farm technology creates spring and summer growing conditions in Canada year-round, growing local, fresh, healthy and tasty leafy greens instead of being trucked long distances into Canada. We are thrilled to contribute to bringing GoodLeaf's delicious produce to Canadians across the country."

"The indoor farm is not impacted by extreme weather events and is not exposed to pests — meaning the produce is grown without the use of pesticides, herbicides or fungicides. The result is a safer, more nutrient dense and sustainably grown food source, providing a local alternative in a produce aisle highly dominated by imports from the southern United States or Mexico."

"There are so many reasons why a partnership with McCain makes sense for GoodLeaf," adds Barry. "We share a keen interest in providing delicious food for Canadians while making farming more sustainable. Our vertical farm technology is a true game changer for Canadian food."

"Investing in the growth of GoodLeaf as a made-in-Canada agriculture solution is directly aligned with McCain's global sustainability plan," says Mr. Dawe. "As a global leader in agri-food, McCain is committed to growing food smarter and in a way that's better for our planet. That's exactly what GoodLeaf is doing."