Aquaponics in the heart of Zurich

They produce greens, but they travel to work by streetcar and don't need to put on weatherproof clothing. That's because Umami employees will harvest vegetables and herbs already in the early growth stages, as so-called microgreens. And they do so in a largely self-built facility, on the 4th floor of an office building in Zurich's Kreis 4 district.

Full-time producers instead of restaurant operators
In the beginning, the three friends Manuel Vock, Robin Bertschinger and Denis Weinberg wanted to open a restaurant. They wanted to produce half of the products themselves. At the same time, Manuel Vock was researching aquaponics systems for his bachelor's thesis. He introduced the principle to his friends, and the team began building a prototype set-up in a former archive in 2016.

That was the end of their restaurant plan and at the same time the beginning of completely self-produced food. The guys grew several varieties of microgreens and sold them to restaurateurs who were excited to have a regional product. "Up to that point, microgreens from the Netherlands were the only alternative," says Luca Grandjean, who joined the team of Umamigos (as Umami employees call themselves) in 2019. 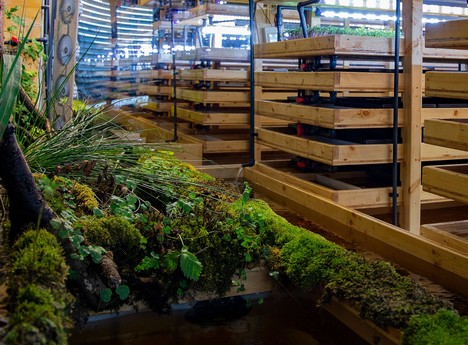 Microgreens
Microgreens, unlike sprouts, grow on a substrate or in soil, require light and nutrients, and are consumed without roots. They are vegetables or spice plants that are harvested immediately after their cotyledons develop. As a result, microgreens contain a high concentration of vitamins and trace elements. The small plants are used as nutritional supplements and can add sweetness and spice to different dishes.

Fish excrement as fertilizer
Regionality is not the only plus of the little plants. Umami grows the microgreens in a cycle based on nature; the only input is fish feed. But even this is actually food waste and, additionally, insects that Umami produces via scraps.

African cichlids (tilapias) and other fish species swim in various tanks, and their excretions enrich the water with nitrogen and other micronutrients. The enriched water flows into the system to the tray on which the microgreens thrive.

These are sown on a hemp-based substrate and positioned in hard trays so that their roots can touch the water, absorbing the nutrients. The water, now purified by the plants, flows back to the fish, who recharge it. Thanks to this recirculation system, only about 1% of the water needs to be replaced with fresh drinking water each month. "That's about two bathtubs full of water. Just what is lost to evaporation," Grandjean says.

Aquaponics
Aquaponics refers to a process in food production that combines raising fish in aquaculture and cultivating crops in hydroponics. There are various combinations, such as the cultivation of tomatoes and the production of tilapias, as described in this article.

Not just fish and microgreens are part of the 'ecosystem', as the Umamigos like to call their jungle. Mussels, shrimp, snails, algae and many other plants also contribute to the Umami ecosystem. "We are copying nature. Yet we have learnt that the more players there are in the cycle, the better the system works," says Luca Grandjean. This might seem to be a contradiction, but he explains: "If there are just two actors in the system and something happens to one of them, the system is quickly unbalanced."

Nomen est omen
Their most important element, he says, is Zurich's tap water; it sets the pace. "We have no soil percolation, 95% less water loss than conventional agricultural systems," Grandjean says.

Environmentally friendly production, free of chemicals, strikes a chord with consumers. Above all, however, the producs have to taste right, says Luca Grandjean. It's no coincidence that the three friends named their startup Umami when they founded it in 2015. The Japanese word means tasty or spicy, and is one of the five basic tasts, alongside sweet, sour, bitter and salty.

"The glutamate found in meat, for example, tastes umami," Grandjean explains. He adds: "The microgreens are very palatable and don't contain glutamate, but our fish do." He is referring to the license to sell fish that the Umamigos recently obtained.