Taking flight between rows of crops inside a greenhouse, the Spotted Wing Drosophila (SWD), Drosophila suzukii, lands on blossoming berries, infesting the fresh produce and causing irreparable destruction. Unlike other Drosophilidae that thrive on harvested and decaying fruits, SWD has a penchant for small fruits – blueberries, strawberries and raspberries – and stone fruits, such as cherries, in both open fields and confined greenhouses. A pest native to Southeast Asia, SWD have landed across Europe, the Americas and, most recently, in parts of Africa. Financial losses linked to the infestation of the unruly pest could reach millions of dollars a year – more than US $500 million in the United States of America, alone – according to a study published in the journal Insects.

The IAEA, in cooperation with the Food and Agriculture Organization of the United Nations (FAO), has the expertise and historical success in implementing the sterile insect technique (SIT) to suppress or eradicate insect pests, like the Mediterranean fruit fly, screwworm flies, tsetse flies and various moths. Given the threat of SWD to fruit production around the world, several countries approached the FAO and IAEA to assess the potential of the SIT to suppress SWD in confined production systems, such as greenhouses. 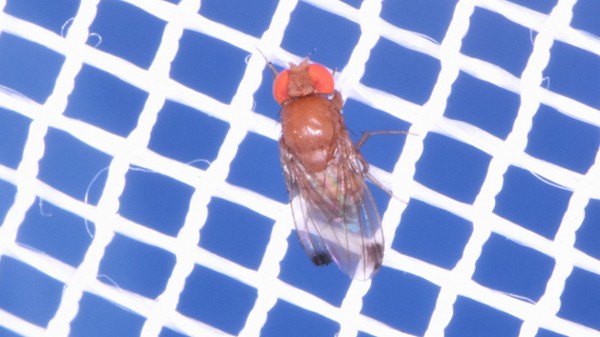 “To date, there are no environment-friendly treatments developed to supress this pest,” said Gustavo Taret of Argentina’s Institute of Agricultural Health and Quality. “SIT would be the only environment-friendly control method that would allow its use in greenhouses, reducing the use of insecticides while protecting beneficial insects in the control of other pests.”

How is the SIT package developed?
The first import of a colony of SWD arrived from Italy in 2015 at the FAO/IAEA Insect Pest Control Laboratory (IPCL) in Seibersdorf, Austria. Since then, the laboratory has investigated the SWD’s radiation biology, which means the effect of ionizing irradiation on the induction of sterility. “For a new species, we need to assess different doses of radiation from low to high to determine what irradiation dose induces near 100 per cent sterility,” said Carlos Caceres, a research entomologist with the Joint FAO/IAEA Programme of Nuclear Techniques in Food and Agriculture.

To nurture the mass production of fruit flies for research, scientists have developed egging systems and adult holding cages. In the case of SWD, the egging, or oviposition, system developed is comprised of plastic receptacles with holes that allow females to lay eggs. “The oviposition system is a panel that consists of a fine net cover with wax. The females are attracted to a specific colour of the oviposition panel,” Caceres explained. “Females oviposit – or lay eggs – through the panel, then the eggs are collected on the exterior of the cage.” Scientists have determined that SWD are attracted to black panels, which maximizes the number of eggs collected.

Once the eggs hatch into larvae, they are fed a diet consisting of carrot powder, sugar, yeast and water. Within days, the larvae metamorphose into pupae. Once the pupae mature, they are collected and irradiated, rendering them infertile. After irradiation, the pupae are placed in holding cages where sterile adult flies emerge. “The holding cages are made of an aluminum frame covered with a fine synthetic mesh net. Inside the cage is a supply of sugar and yeast, as a source of nutrients, along with a water-soaked sponge for the flies’ hydration,” Caceres said. One cage measures 50 cm x 50 cm x 50 cm.

After three days in the holding cages, the adult flies become sexually mature and can be released in the target area to mate with fertile females, resulting in no offspring. This will consequently lead to a decline of the wild population with each generation.

Status of SIT for SWD
Mass-rearing protocols for SWD have been established, and handling and release protocols so that the adult flies arrive healthy and competitive in the field are under assessment. “A stable and sufficient production of sterile insects is required to carry out evaluations in confined areas or greenhouses and to be able to adjust the release rates and frequencies,” Taret said. To date, pilot trials, in which 50 000 to 100 000 fruit flies are produced per week, have been deployed in greenhouses in Argentina. An additional pilot trial is expected to be implemented in France this year. 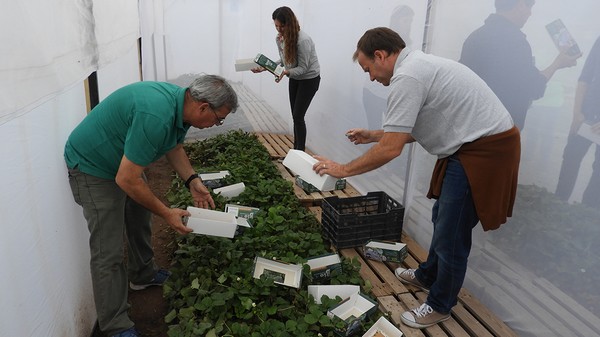 Results from these pilot trials will allow the integration of SIT to control SWD in the affected countries. “The basic technology for the SIT for SWD pilot test is in place, which would require the release of about 2 million flies per week over targeted areas, but its adoption and deployment depend on plant protection authorities and fruit industry decision makers,” Caceres said.

The SIT package for SWD is expected to be finalized in 2023. “The SIT can be integrated with other control methods, reducing crop losses, pesticide residues in food and risk to workers,” Caceres said.