Spanish acreage and yield on the rise:

Labor issues in the Spanish greenhouse industry have urged many tomato growers to switch to a different crop. For this reason, the pepper acreage in Spain has expanded. “Pepper is becoming a more and more attractive crop which allows growers to diversify and stay profitable,” says Carlos Herrerias López, Sales Manager Solanaceas South Europe at Enza Zaden in Spain. He explains how new varieties help growers deal with the challenges in the market.

Compared to last season the Spanish pepper acreage increased more than 5% up to over 11.000 acres of peppers, Carlos says. “Many growers switched from tomatoes to peppers. In the end, peppers cost less labour and the prices are quite stable, so it’s a safer choice.”

“The growth occurred mainly in block pepper growth, which is the main product here. The conical peppers, both the long one and the snack varieties, fill about 15 percent of the acreage and although their acreage has been on the rise year after year, it still is only a small percentage of the total crop.”

High production, reasonable prices
Due to the growing acreage and the good weather during autumn, production has been high and prices have not been too bad this year. “Usually the pepper prices rise in January and growers awaited this moment.” He explains that since the weather changed at the beginning of this year, they had to keep an eye out for funguses and diseases. “Because of the good weather in autumn, the fruits have ripened fast. After the cold weather we’ve had earlier this year and the humid condition due to the rainfall in January, the disease pressure grew. Growers had to harvest their produce in the last ten days, resulting in lower prices. Now the majority of the harvest is done and the prices are recovering again.”

With funguses and viruses being a general challenge in the market, Enza Zaden has paid a lot of attention to the correct resistances in their pepper varieties. “Peppers have been a priority for us for many years. Since last year we’re able to offer a complete gamma of block peppers with Tm:0-3, TSWV and Oidium resistances,” Carlos says. “We offer red, yellow and orange peppers, which is unique in the market. These varieties have all been selected for offering a homogeneous production, a good shape, and an excellent quality” 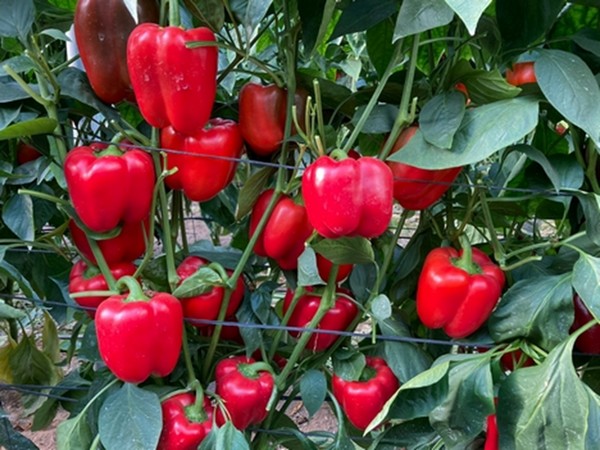 The red one
The newly released variety Vanadio (E20B.10369) is said to offer a great size for the export market: the flowpacks, and the traffic lights. “The Spanish season is divided in three planting periods and Vanadio performs well, even when planted in July. With a medium size of about 200 gram and a homogenous production, it’s in favour of many growers, especially since that is combined with a Tm:0-3, spotted and powdery mildew resistances.” 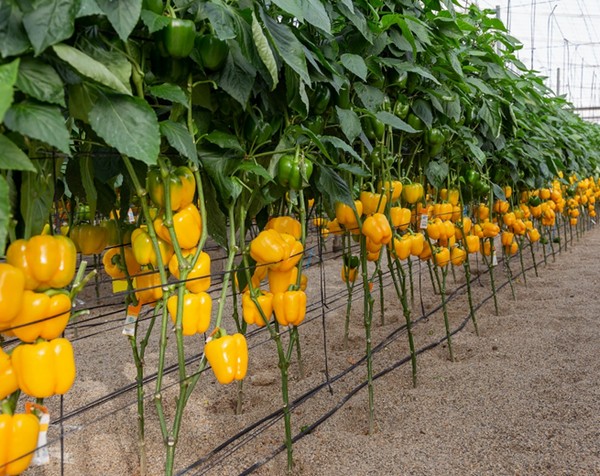 The yellow one
The yellow variety is the E20B.10289 and on top of the resistances, this variety offers an easy setting – something that makes it very suitable for early planting, in May or June. “The fruits ripen very fast, which is important to get a good sized pepper in the hot summer months. Previously, the peppers used to be smaller when harvested in September, but with the E20B.10289 there will be proper sized yellow peppers on the market in September.” He explains how prices used to be good in September, since traditionally there’s a gap on the market when the Dutch production lowers. “There’s room for proper sized yellow peppers.” 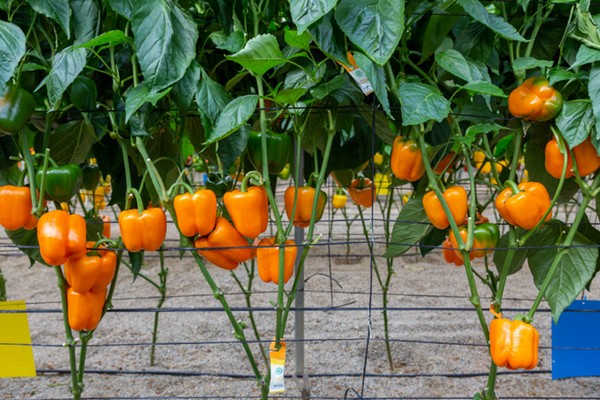 The orange one
The orange variety completing the Tm:0-3, spotted and powdery mildew resistant trio is called E20B.10419 and is suitable for planting in July. “With this combination, we’re the only company offering non-heated block peppers in three colours with three resistances,” Carlos summarises and adds that the company is ready for the new season, of which planting will start again in two to three months. “This year the performances have been really good so we’re excited for next season as well.”