It was with surprise that Jyrki Jalkanen with the Finnish Glasshouse Growers' Association learned about the statistics of the Food and Agriculture Organization of the United Nations (FAO), saying that Netherland ranks first in terms of cucumber production with an average yield of 68.38 kg /m2. “Many Finnish year round cucumber growers reach an annual yield of 200 cucumbers /m2 and since more than half of the Finnish cucumber acreage is equipped for year round production, the average production in Finland was 93,9 kg in 2019. “We might have reached an average yield of 100 kg in 2020,” he adds. 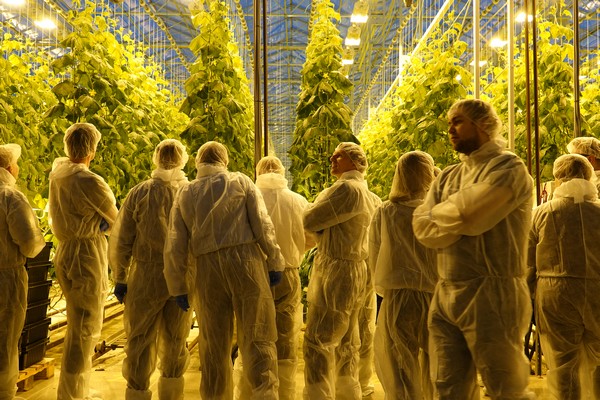 Lighted cultivation
“The growers that opt for year round production, grow with lights above and between the the rows and cultivate three crops per year. By interplanting and depending on the schedule of the grower, they can harvest up to 46-47 weeks per year,” Jyrki Jalkanen says.

“That enables some of them to get even 250 kg at highest so far per year per square meter.”

Since more than half of the total Finnish cucumber area is equipped for year round cultivation (27 of 50 hectare), the average Finnish harvest is way higher than what has been reported as the highest in the world, the Dutch 68 kg/m2.

“By law Finnish growers are required to answer a yearly questionnaire, which results in a very good overview of the industry statistics and the developments in the market,” Jyrki shows. The acreage has been growing slightly, and the production per meter has been growing rapidly. “The temperature in Finland can reach minus 25 to 30 degrees Celsius easily and there’s not that much daylight in winter, so most growers opt for HPS since this brings them light and heath. Now there’s also a grower working with full LED. That is possible if you arrange your heating in another way.”

Typically growers set HPS-lamps 310-320 W/sq m2 which brings around 550-600 micromoles. Roughly 2/3 of the light is above the plants, 1/3 between the rows. Full leds are not interesting for cucumbers anymore. Main variety is Imea (EZ). 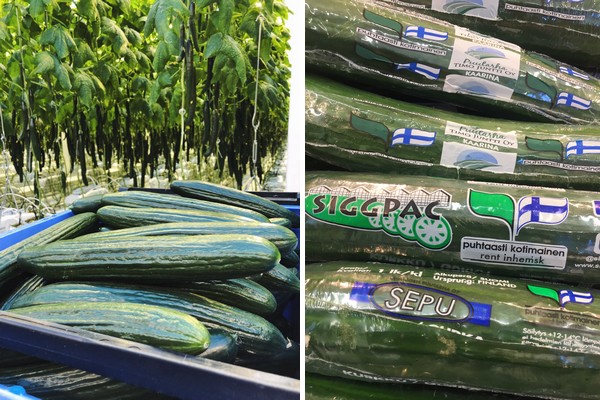 Challenges in clean cultivation
“Of course there’s challenges for the growers when growing year round,” Jyrki says. “And just like in other countries, viruses and bugs are an issue in Finland as well. If you are dealing with this, you will not reach these numbers. Up until now we have lucky when it comes to this – and one of the things that makes us lucky is that we have super strict rules on nurseries. We are allowed to see each other, but following very strict rules. If you have a problem with virus or insects, you share this information so we can act on it.” Overall the innovation level in the industry is high and there’s an open culture, meaning that growers share knowledge, driving further developments in the sector. “In the last couple of years we’ve seen existing companies expanding. Then there’s the higher yield numbers, all resulting in a higher total production.”

Market share
Before the boycott, Finland used to export some cucumbers to Russia and nowadays a little number is exported to Sweden and the Baltic States, but the main part of the production is for the internal market.

“The number of people in Finland is quite stable, it is mainly the market share of Finnish crops that is on the rise,” Jyrki shows. “A couple of years ago this was 75 to 85 per cent, now it is more than 90 percent and this year it might even be 92, 93 or 94 percent. At the same time the import numbers went down. The Finnish production has taken market share form the import.”

This is something that the industry is accountable for – both on the producing side as on the sales. The Puhtaastikotimainen brand shows consumers that a product is grown in Finland. “It’s a well-known and highly valued quality label,” Jyrki says. “If you would go out on the streets, 98 percent of the consumers will recognize the logo and buy cucumbers with it for that reason.”

With a 94 per cent market share, a situation in what there’s more product on the market than there’s being eaten might occur. “But we see that we’re able to deliver the product more fresh to the market and that we can also lower a prices a bit, so consumers might start eating more cucumbers in the future.”

About Puhtaastikotimainen-brand
The Finnish brand Puhtaastikotimainen  was created by cucumber growers and launched in 1989. Ever since it has been used for all horticultural products and its 100% paid by the growers' organisations. There's a high recognition: 98% among Finnish consumers recognize the logo. Growers must have a quality certification system to get the logo for his company. Annually about 400 million products are marked with the logo. Then there's a strong promotion of the website www.puhtaastikotimainen.fi and on social media.