Some more validation tests will need to be carried out this year, but if the results are good, a cucumber deleafing robot will be introduced this year. Harrie Schonewille of VDL Enabling Technologies Group has high hopes for the robot, he said during the NVTL Annual Conference yesterday.

2021 will be a year where people will be looking to see the practical application of robots in greenhouses. By VDL, but also by the other participants of the congress. In the field, the time has come that developers from all areas introduce robots, including a tomato deleafing robot that was introduced earlier this year.

Almost
Harrie says that the market is gaining momentum and that the technology is ready and the time is right. That is also why VDL is participating. The company, actually a group of companies known from the automotive industry but that also build machines as VDL ETG, especially wants to develop knowledge and technology. But to learn about all the aspects, they also started developing their own robot.

And the robot is almost ready. The robot will help growers by deleafing high-wire cucumber cultivations. To do this, the robot must be smart, and so artificial intelligence was used to teach the robot which leaves to cut and, more importantly, which not to cut. "Quite a challenge, with all those leaves and backlighting," Harrie indicated.

The choice was made to equip the robot with software that makes the robot self-identify leaves. The key lies in identifying the nodes from which leaves grow and the robot must self-identify and correctly locate nodes, because the leaf position, of course, is never the same.

Integration in existing greenhouses
Congress participants had the opportunity to ask questions online following the presentation. For example, they wanted to know if they also collaborated with breeding companies. Yes, we have certainly talked to them, was the answer, although developing new varieties suitable for robotics takes more time than developing the robot itself. Later in the congress, it was also noted by one of the participants that the greatest opportunities now lie in offering robots for the current situations in greenhouses. This means growers don't have to change everything, they can integrate a robot into their current situation. 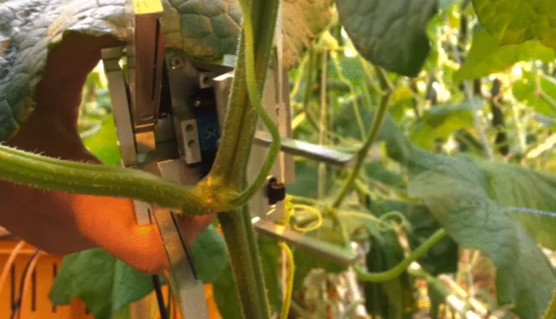 Decontamination unit
With cucumbers, the risk of virus also plays a part. The robotics company has thought of this, by fitting the robot with a decontamination unit. As a result, one knife is continuously disinfected while the other one cuts. They are also looking at heating the blade, but that is trickier because it requires quite a bit from the battery which moves the robot on the pipe rails.

If all goes well, cucumber growers, who are also explicitly involved in the development, won't have to wait long. Unless the final validation tests are disappointing, in which case the introduction will be delayed. But as stated, that is not the expectation.

And then VDL can move on, to tomatoes, peppers, and in time, vertical farming. Those crops are also found in their 'Roadmap VDL in Agricultural Robots'.

More on the NVTL Annual Conference, which featured numerous other speakers, can be read here and seen on the organization's website.