As the global population approaches 10 billion by 2050, agricultural production will need to increase by 60%. Yet with every 1°C of warming, agricultural productivity is projected to fall by 5%. One model predicts that potato yields could decrease by as much as 32% by 2060, but the development and distribution of climate-smart varieties can ensure that this nutritious and fast-maturing crop continues to play a vital role in food systems in economies worldwide.

To accelerate the development of those varieties, scientists have taken advantage of advances in genetic sequencing and are using the knowledge gained to breed potato varieties better suited to meet the demands of the future.

Scientists at the International Potato Center (CIP) have long been at the forefront of this trend, participating in the international group that published the first potato genome sequence in 2011. Thanks to recent breakthroughs involving the discovery of genes linked to important characteristics—from nutritional content to disease resistance—they have begun using genetic markers to speed up breeding for desired traits. 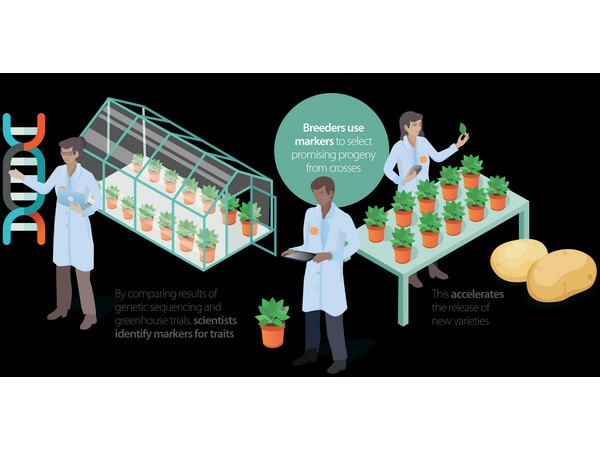 Accelerating potato improvement
Potato improvement begins with crosses between breeding parents that produce tens of thousands of offspring. Scientists have traditionally spent years evaluating those plants in fields and greenhouses, and eventually through male and female focus groups, in a process of elimination that results in a shortlist of potato clones with the greatest potential.

The use of genetic markers for traits such as resistance to late-blight disease and the two most destructive potato viruses has accelerated CIP’s progress in producing higher yielding potatoes. Whereas breeders once had to let all the progeny of a cross mature in a greenhouse to determine which ones were resistant, they now simply remove a leaf from each young plant for genetic sequencing to determine which ones inherited the resistance genes. The genetic marker for late blight resistance, for example, has cut the time this process takes by 50 percent. 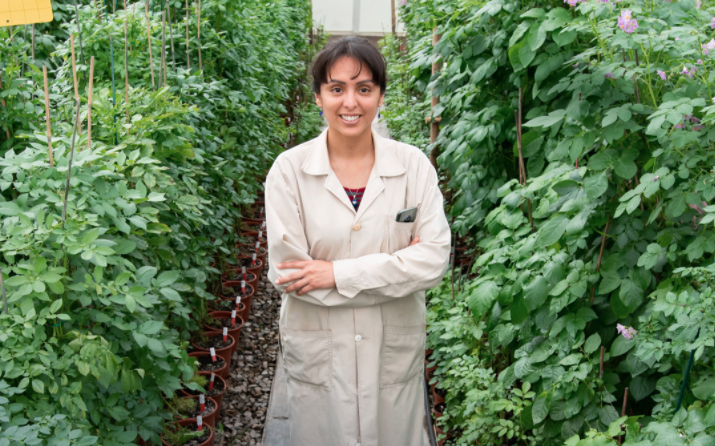 Transferring resistance
Potato viruses accumulate and erode yields from one crop cycle to the next, whereas late blight can destroy a field of potato plants in a matter of weeks. When late blight-resistant varieties are grown widely for years, the pathogen evolves to overcome their resistance mechanism. So, breeders are always searching for new sources of resistance, frequently found in native or wild potatoes.

CIP recently crossbred with a wild potato native to Cajamarca, in northern Peru, to produce late-blight resistant potatoes that are potentially commercially viable. Shared with breeding partners in several countries, those potato clones are currently undergoing evaluation for possible release as varieties in Peru.

Since 1973, the CIP genebank has been collecting and preserving native and wild potatoes, many with resistance to late blight. As part of an international initiative to conserve, study, and use the genetic diversity of potato, tomato, eggplant and peppers—all of which are related—much of that biodiversity has been screened for disease resistance and undergone genetic sequencing in recent years.

Genetic markers
The benefits of overcoming late blight cannot be understated. Estimates put annual global potato losses due to this disease at nearly USD 5 billion in 2019. Cutting into those losses with more resilient varieties can make an incredible difference for small-scale farmers, helping them transform their operations from subsistence to commercial.

With genetic markers, it becomes easier for breeders to develop resilient, high-yielding potatoes with the key traits—taste, texture, cooking time—sought by local consumers. The resulting varieties will enable farmers to meet the rising demand for food, improve their incomes, and cope with yet unforeseen challenges of a changing world.