CEA growers might miss out on UV light benefits

“CEA agriculture has increased in importance in 2020, with restraints on traveling, shipping and transportation,” says Triston Hooks, Research Associate at Texas A&M AgriLife. However, there are also some issues around it. Triston states that both indoor and greenhouse growing typically block or lack UV light, whereas greenhouse material mostly blocks 50-95% UV light.

A recent study at Texas A&M AgriLife Research and Extension Center, led by Dr. Genhua Niu and presented by Dr. Triston Hooks at the Controlled Environment Agriculture Conference organized by Dr. Joe Masabni, highlights the ‘effects of supplemental UV-A and red/blue (RB) LED light on lettuce quality’. The underlying reason for the study is to investigate whether CEA production systems might be missing out on some potential benefits. “We suspect that UV light plays a crucial part in the lettuce pigmentation process," says Triston.

The study was divided into two replicated experiments. For both experiments, the UV-A intensity was doubled, targeting the end of production (EOP) time. Which is the same as a pre-harvest treatment. Also, some comparisons were made between day and night durations. When providing UV-A during the day It’s different than when providing it at night, using red and blue light as a comparison. 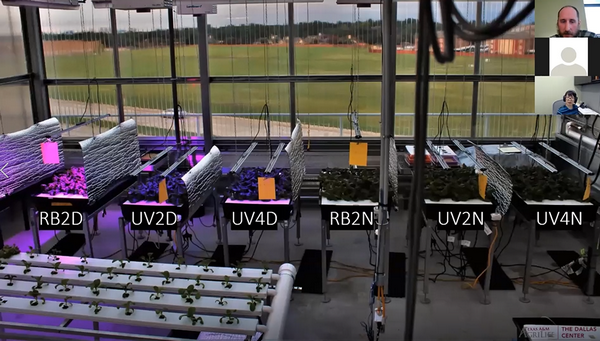 The main finding of the research is that UV-A light increased pigmentation and phytonutrients of the lettuce without suppressing growth in hydroponic lettuce production in a greenhouse.

Experiment layout
The figure below shows the supplemental end of production light treatments. Six different light treatments were used for the research. There was also a control, with no supplemental EOP light, with only the received sunlight that was entering the facility.

Both experiments made use of shallow water culture systems, using bins with nutrient solutions that stood on a frame with a floating raft on top holding the lettuce. The lights were hung right above the plants. In the last four days of the treatment, insulated light shields were used to prevent light pollutions from one to the other.

Findings
Both experiments were conducted with similar greenhouse conditions. Experiment 1 and two have shown that by adding supplemental UV-A light, this increases pigmentation visually compared to the control, which was not as effective as the RB treatments. During the experiments, there was no reduction in plant yields and biomasses. However, the researchers did note an increase in phytonutrients at both experiments. 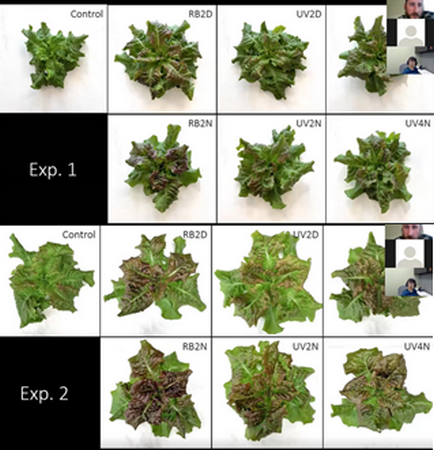 Conclusion
Therefore it can be concluded that supplemental UV-A light increased pigmentation and phytonutrients of the lettuce without suppressing growth in hydroponic lettuce production in a greenhouse. During the experiments, supplemental UV-A light was more effective during the day. When looking at the UV-A intensity, a higher intensity may be possible without suppressing the yield. However, Triston notes that more research is needed to better understand the effect of UV-A light on different species and cultivars.