Israeli Industry experts estimate that about 10 percent of the world’s fruit crops rots on the trees and goes to waste because there are not enough workers to pick it. That is why one apple grower in northern Israel is testing out a robotic fruit-picking system from Tevel Aerobotics Technologies, a local startup founded by veterans of Israel’s aerospace and electronics industries. 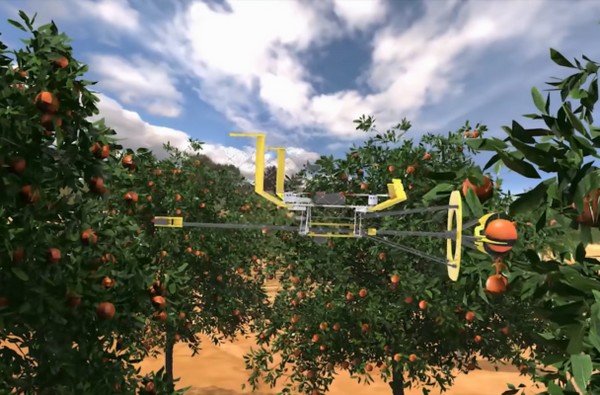 The Tevel company has developed an autonomous driving platform with several tethered robots that fly up and pluck fruit from the trees. Instant artificial intelligence-based analysis of video of the trees allows the robots to pick only the fruit that is ripe. As the robots work, the system constantly updates farmers through a mobile phone app on how many pounds of fruit have been picked, and how much time it will take to finish the harvesting job.

“It solves the farm labor shortages,” said Yaniv Maor, founder and CEO of Tevel, based in Gedera in central Israel. “But the main advantage is simply that it can be there when there are not people to do these jobs.”

The flying robots are more accurate and work longer hours than people. They can also carry out other tasks, like thinning and pruning trees, bringing down the cost of fruit production by about 30 percent.

Tevel’s solution is still in the testing phase, but the company expects to introduce it soon to an eager global market. The agricultural robotics sector, worth about $4.6 billion, is estimated to be growing more than 30 percent each year as farmers look to solve labor shortages and harvest costs. The Covid-19 pandemic, which has exacerbated the labor shortage, with countries closing borders and halting or limiting the issuing of visas and work permits, has further increased interest in robotic harvesting. In addition, there have been several Covid-19 outbreaks reported among seasonal agricultural workers in the United States, Europe and elsewhere.