Coming off a very eventful summer that resulted in expanding distribution by adding Stop & Shop stores throughout New England and supporting medical first-responders during the pandemic with donations of a quarter of a million dollars in baby greens, hydroponic lettuce grower, lef Farms continues its forward momentum by adding a new production manager to its mix.

“We’re so excited to add Mariana Robles to our management team,” smiles lef founder, Henry Huntington. “As a 2015 graduate from the University of Los Llanos Colombia, specializing in Agronomy, Mariana brings with her some fresh, out-of-the-box thinking that we can’t help but benefit from,” finishes Huntington. 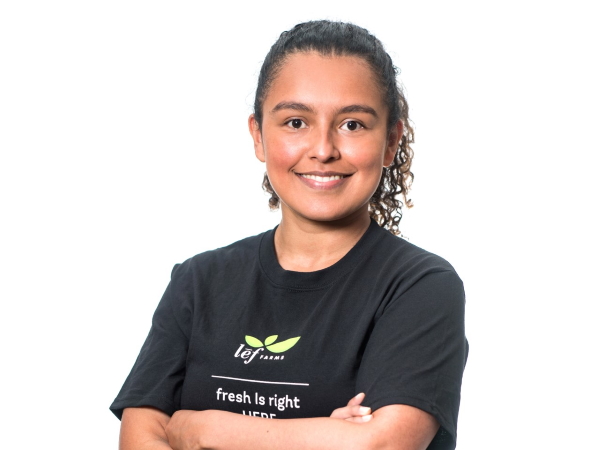 But Mariana isn’t a new face at lef Farms. With a passion for farming that brought her to the region in 2015, Mariana was eventually hired by lef in early 2018 to support its seeding line. Since then, Mariana developed into one of lef’s key team members, taking on additional responsibilities as food safety officer and cooler supervisor. As the company continued to grow, Mariana’s new position was created to provide more time for training, education, and coordination between different departments within the organization. As production manager, Mariana will be responsible for driving efficiencies, improving procedures and protocols, and increasing teamwork at Farm.

“With expansion in our near future, putting Mariana in role of production manager allows the Farm to continuing its maturation process prior to pulling that trigger,” concludes Huntington.