How great would it be to have a small greenhouse in your own garden where you can grow vegetables, fruit and herbs in an environmentally-friendly, clean and energy neutral way? That is what the recently retired Theo van Lieshout of Wognum (Netherlands), thought. He did not want to sit at home, staring out of the window, and decided to take up a challenge, after he had previously made his home energy neutral.

Now he can also cross the construction of a high-tech greenhouse off his list, and the greenhouse is almost ready for the first crops. Hydroponically grown, that is, and for this, Theo relies on the advice of experts. 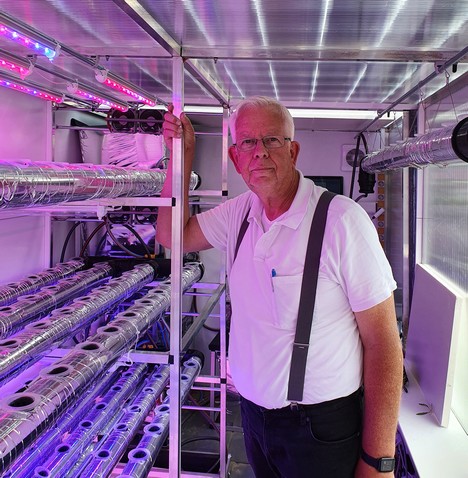 Theo in his greenhouse

IKEA
The greenhouse is 5 meters long, 2 meters wide and 2 meters high. The rain water is collected and stored in stackable IKEA trays. "In the greenhouse I make use of 4 layers with tubes which, for example, transport water with nutrients according to the ebb-and-flow system once per hour. A pond has been installed on the ground level on which the floats sit. The tube has numerous cutouts for pots with compressed soil as substrate. Put a seed in it, and it grows."

Tinkering with LED lighting
It sounds easy, but of course it is not, as Theo knows full well. A lot more is required, such as lighting.

"I have purchased customized Chinese LED lights. Adjusted, because the reliability and safety were not up to scratch. Depending on the application, the various layers have different colors, such as mainly blue for seedlings, mainly red for leafy vegetables and broad spectrum for blossom setting. All groups can be separately controlled in two intensities." 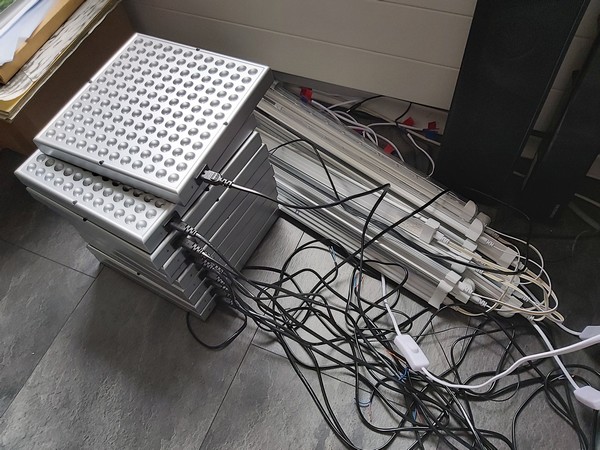 Own CO2
Although LED lighting is very efficient (40 - 50%), the lamps are still getting hot, Theo notices during testing. "For this reason, each layer has two fans to provide a calm airflow for the plants, so it is a double-edged sword." 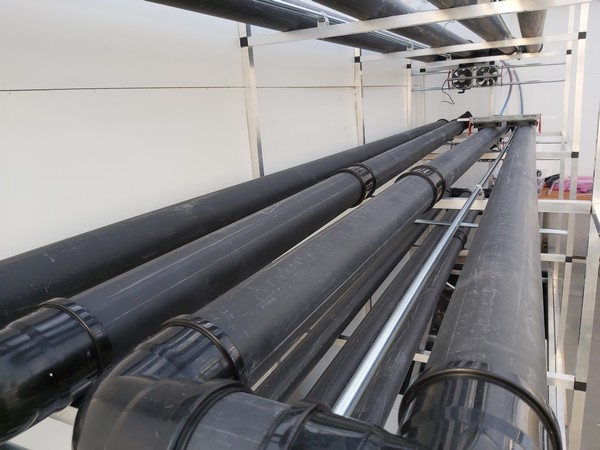 During testing, the tubes first became too hot

"A nice feature is that the CO2, which we breathe out at home, is measured, and when concentration increases (> 700 ppm), a fan will suck the air out of the house. It is then made available for the greenhouse plants." 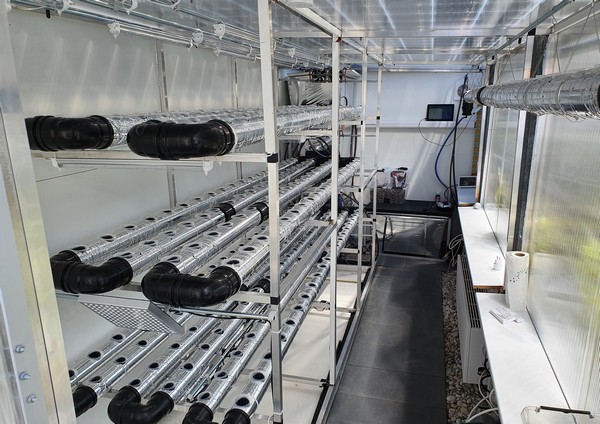 Aluminum tape
Every greenhouse owner knows the problem of heating by the sun. In March, the greenhouse was already 20 degrees warmer than the surroundings. Theo has solved this in two ways. "All tubes and trays are wrapped in aluminum tape. The light is no longer absorbed and reflected, and thus available for other plants. That already makes a lot of difference."

On top of that, Theo came up with another 'interesting solution'. "That is using semi-transparent solar panels on the roof. Around 5 percent of the light is let through to be used by the plants, but the rest is used for generation of electricity, an estimated 1500 kWh per year. The sides have been shielded by plants, partially blocking the sun light. The result is that the greenhouse is now no more than five degrees higher than the surroundings." 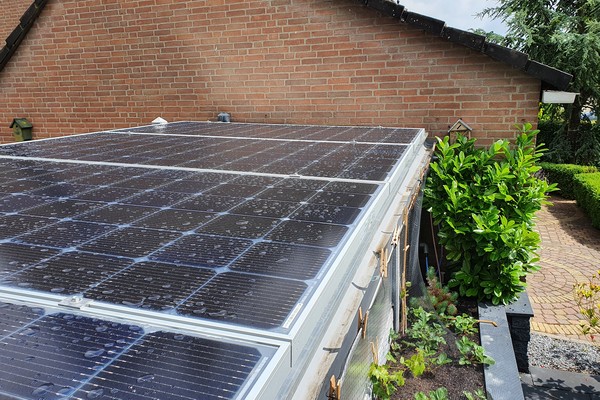 Water pump
Another interesting feature which Theo has applied, is the coupling to a heat pump. "A year and a half ago, I completely made my house completely energy neutral with heat pump, solar panels and heat generation. I also have written books about this, by the way.

"Residual heat is then used to heat the greenhouse but cold from the ground. I also call this ground cold, which can be used to cool the greenhouse, both with a radiator and heat exchanger (hose) in the pond."

Tablet
On balance, the energy use approaches energy neutral, in combination with the solar panels on the greenhouse, Theo notes. "A tablet or PC can be used for control, anywhere. As a technician, I am/was an electrotechnician, I have much experience with technical projects, and at the University of Amsterdam, I worked on projects such as the design of LED lighting for plants and a photospectometer."

Grain of salt
Now Theo is ready to grow, he runs into the fact he does not know very much about the effects of light and nutrients on the plants. Except for what can be found on the internet, but you should take that with a grain of salt. Luckily, there is also some common sense. "Now, I have to mainly focus on the possibilities and demands of the plants."

Cultivation + parallel project
Theo would like to get in touch with people who are as crazy as he is, in his words. "I will never break even, that much is clear to me. I will start with a diversity of seeds (vegetables, fruit and herbs) and try to optimise with nutrients and light colors.

"A project running parallel to this is the making of a photospectometer to measure the color shift/intensity so you can see whether a plant is saturated with light. This is an extension of the work I have done before. But that is something for winter."