LED lighting has been proving its worth in the cultivation of various crops. From tomatoes and herbs to strawberries and cannabis, many growers have already made the switch from HPS (SON-T). One crop that's still lagging behind a bit in this development is the cucumber, where growers still mostly favor HPS for the heat it generates, or because the benefits of supplemental (LED) lighting in winter may not be immediately clear. Leo Lansbergen, Horticulture Service Specialist with Fluence, is looking to convince those growers of the usefulness of LED lighting in cucumber cultivation. In a webinar organized by Fluence and Agritecture, he shared the latest insights and trial results.

From umbrella to high wire
Leo began by highlighting the continuous quest by growers, research institutions and suppliers for new systems, in order to maximize yield and fruit quality. The most remarkable change in this light has been the switch from the umbrella crop system to the high wire crop system. "The construction of higher greenhouses enabled adoption of the high-wire crop system, which is more and more common now."

And not without reason, because high-wire cucumber cultivation provides a number of advantages. In addition to a higher yield potential, harvesting is easier (although 20-30% more labor is required compared to an umbrella system). Furthermore, Leo explains, the fruit quality is excellent due to faster fruit growth and the shelf life of the cucumbers in winter is better compared to no supplemental lighting. Finally, the high-wire system is very suitable for supplemental lighting, and it's a required condition for robotized harvest.

The broader use of the high-wire crop system, in addition to the increased demand for winter production, has increased demand for supplemental lighting in cucumber cultivation. "Alongside the changing crop system, we've also seen a change in the light sources used", Leo says. "While HPS is the current standard, there's been increasing interest in LED, whether it's a hybrid or full LED lighting solution, fuelled by increasing demand for winter production."

The power of LED
With LED lighting, growers can transfer power into relatively more light and less heat compared to HPS. "Although in winter, the radiant heat of HPS can be used, in spring and fall lighting by LED can contribute to faster crop and fruit development without increasing the temperature too much", Leo explains. So the loss of a bit of heat in winter can be more than compensated for with the extra lighting provided in spring and autumn.

Another benefit of LED lights is that they last longer and it's not necessary to replace the bulbs after some years for instance, like with HPS. Also, using LEDs provides the option of precise dimming (rather than the 'checkerboard' dimming of HPS lights). "By using those options you have full control of your lighting to the crop and thus the growing conditions. You thus can get a very constant light level in winter and early spring."

PPF, PPFD, DLI
Before diving into the specific advantage of using LED in cucumber cultivation, Leo reminds us about some basic concepts used to compare different solutions for lighting.

First of all there's the photosynthetic photon flux (PPF), that's the number of light particles within the 400-700 nm range (PAR) emitted by the LED fixture per second, expressed as micromole per second. Then there is the photosynthetic photon flux density (PPFD). That's the momentary light intensity (PAR): the number of photons (light particles) emitted from the fixture that reach 1 square meter (expressed in micromole per square meter per second). Leo stresses that it's important not to talk about lux or watt per square meter anymore when comparing lights. For cucumbers the PPFD ranges mostly between 200 and 300 micromoles.

Another important aspect to bear in mind is the daily light integral (DLI). That is the sum of all light (PAR) particles per day on a specific area in 24 hours. This is expressed in moles per square meter per day. Again, it's important to measure in moles, Leo emphasizes, and not joules. While it makes economic sense to keep an eye on power consumption, ultimately it comes down to plant performance, which depends on the spectrum, light intensity and DLI. The latter depends on the grower's region. Maps like the one below help to determine the DLI where you are. 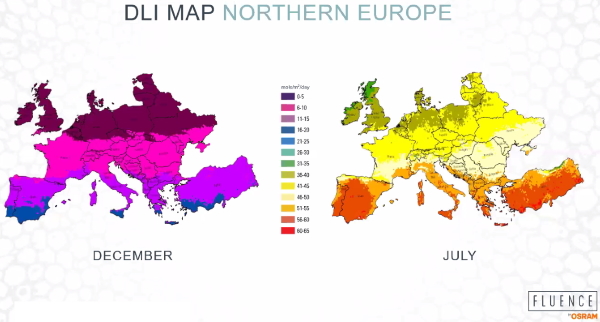 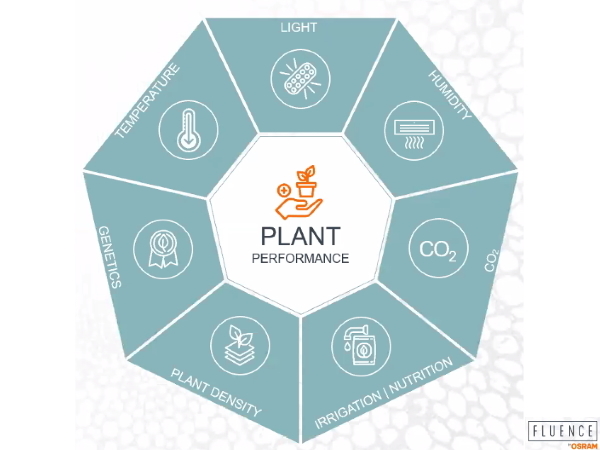 Remembering the young plant
When a new crop enters your greenhouse, they need to get used to increasing light levels and more and more light hours a day. "These tools are already used by the propagator of young plants, so it's important to adapt the start of your own lighting strategy based on the light already received by the young plants", Leo says. "When we know the light history of the propagation phase, we can start from there, and increase the lighting intensity slowly from there in the next two or three weeks. Having the dimming option, LEDs gives you full control in this photo acclimation." Something to remember here is that the more light that was given to the young plants, the higher intensity and lighting hours (photoperiod) you can start with.

Striking a balance
When it comes to lighting, there are two strategies you can go for: a constant DLI, adjusting light intensity to the natural light intensity to create a consistent DLI (by dimming down a bit on a very bright day, and vice versa), or you can go for maximum DLI, going full power with everything to the max for 20 hours. In the latter case, you also have to accept a changing DLI and less consistent plant and fruit growth.

Too much light in an early crop development, leads to a disbalance in the source-sink ratio: the plant doesn't have enough fruit available to process the assimilates after absorbing the light, so the plant starts avoiding light interception. In an older stage, the leaves can even show photo bleaching, due to chlorophyll being broken down. 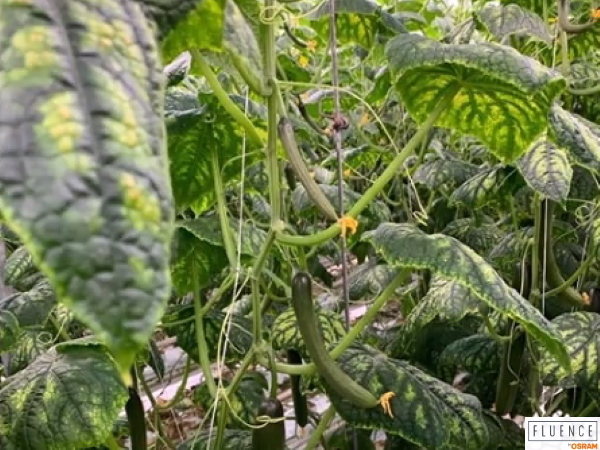 Fortunately, cucumber crops can recover in three to four days, when the right measures are taken in time - that can be, creating a shorter photo period and higher night temperatures to increase the dissimilation level. The photo below shows the same crop as in the one above, three to four days after corrective action has been taken. 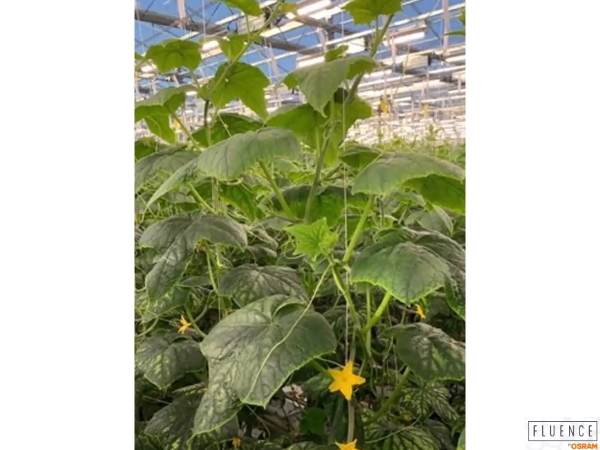 The spectrum will also influence plant architecture. As you can see in the following photo, compared to no supplemental lighting using full LED can lead to a more compact plant. 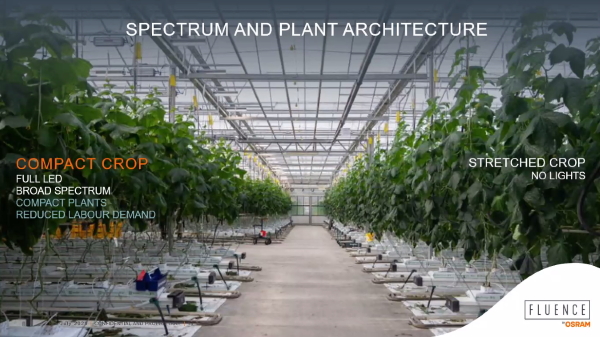 LED put to the test
Of course, working for a supplier of LED lighting, it can be expected that Leo is enthusiastic about LEDs. But he also has the science to back him up. Fluence has been doing trials with their research partner in Belgium, Proefstation voor de Groenteteelt. In the winter trial, three broad spectra were used, featuring red, green and blue light, with red light percentages in the 40s, 60s and 80s range (R4, R6 and R8). In addition, a spectrum featuring only red and blue light, in a 95 / 5 ratio, was used (known as R9B in the test).

The four spectra were tested in four compartments, and the plants were surrounded by a buffer of plants. In general, the broad spectra (so the spectra containing red, blue and green) proved better than the red/blue only when it comes to increased yield. 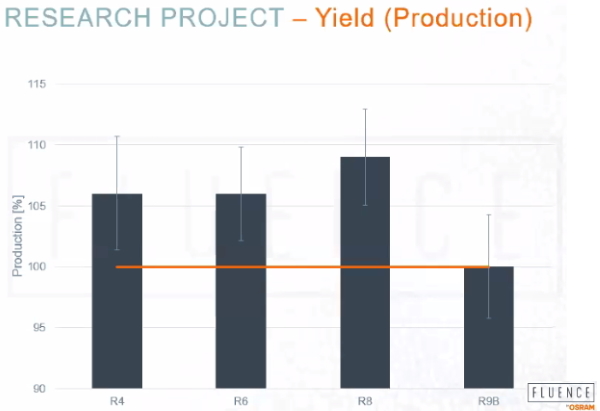 Of the broad spectra, R8 turned out to be the best for yield. R9B, on the other hand, struggled in winter. "Our hypothesis is that it's most likely related to spectral acclimation", Leo shares. "Although we do not have the proof, we see the effect and will research further. The idea is that when crops grow under the R9B spectrum in winter, they get used to that spectrum. When after a few weeks of dark winter conditions there are suddenly brighter days of sunlight, growers don't see an improvement in the crop - this is most likely because the plants cannot use the green light in the sunlight."

The graphs below show that the fruit weight has been influenced a lot by the spectra, with higher average fruit weights under a broad spectrum. The fruit development is also faster when the crop gets more light via the broad LED spectrum, while the red and blue spectrum needed the most time to harvestable fruit, with R8 showing the fastest development. 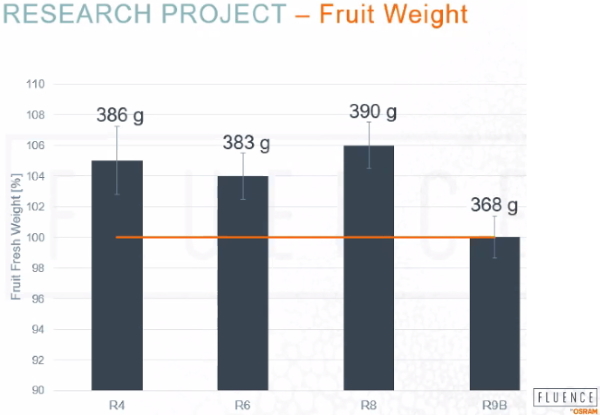 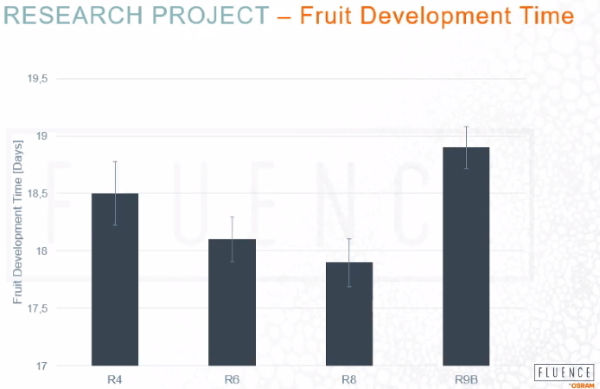 No silver bullet
Out of this winter trial, we may not conclude that there's only one single magical solution that works for all growers everywhere. What is clear is that a broad spectrum, including green light, works best for cucumber. While the R8 spectrum performed best in the trials looking at yield, other factors are also important to consider, like the location of the greenhouse (if it's in the south of France or the north of Sweden makes a big difference in your choice of spectrum).

Finally, Leo provides some tips for those looking to take the plunge and move to LED lighting. "If you want to change from HPS to hybrid lighting (HPS+LED) and then later want to change to full LED, please already anticipate on that: choose the right LED spectrum already now for your hybrid solution that you can use in your later full LED set up." He also notes that the spectrum interacts with the genetics, so take into account the interaction between light and crop, and collect information as well at your seed supplier.

"In the end," Leo concludes, "it comes down to maximum yield, through synergy between all the growing factors. Use the correct plant/stem density, choose a spectrum, and realize that potential LED benefits also exist in spring and fall."

"As cucumber production is turning to a year round production in Europe, supplemental lighting will be even more essential, especially in the dark months. Fluence's research at the Proefstation voor de Groenteteelt showed the benefits of broad spectra, regarding yield and morphology, where narrow band spectra cannot compete. This enables commercial growers to start year round production in a successful way", Sebastian Olschowski, Research Project Manager with Fluence, adds.