Feeding the world with controlled environments

This case study, written by Gene Giacomelli and Eric Roth for Agritecture, takes a look at how CEA has emerged as a viable, contemporary agricultural practice over the past 50 years. Here’s how it happened!

The fallout from increasing global temperatures, a worldwide pandemic, and political unrest is causing projection reductions for crop yields in some countries as much as 50% this year, and small-scale farmers are the most affected with crop net revenues falling by as much as 90% by 2100. The consumer preference for consistent, year-round availability of produce has expanded because of the Controlled Environment Agriculture (CEA) industry, even surviving the recession of 2008. “That indicates to me, that no matter what the next recession brings, CEA food production systems will be firmly entrenched in U.S. agriculture production practices,” says Gene Giacomelli, Professor of Biosystems Engineering and former Director of CEAC at The University of Arizona.

CEA has emerged as a viable, contemporary agricultural practice over the past 50 years. There have been dramatic improvements in efficiency metrics including overall crop yield per square unit and reduction of wastage due to disease, nutrient deficiency, or damage to the product. From Space to Antarctica; from rooftop greenhouses to rural farms worldwide, CEA has proven itself to be not only a complement to open field crop production, but in some instances, a competitive alternative (or in the case of Space and Antarctica the ONLY) approach. Today, more than 60% of all fresh tomatoes consumed in the U.S. are grown in controlled environments and that number approaches 100% during the North American winter. Here’s how it happened...

In the 1990s, the U.S. greenhouse production shifted from its infancy to a steady supplier of fresh produce. While greenhouses use the sun as their main source of light, they can also make use of supplemental lighting for additional growth. This advantage, along with the ability to control and protect the growing environment, encouraged large farming corporations to enter the space in the Northeast, Arizona, Colorado, California and Texas. Environmental control enabled these early adopters to produce crops like tomatoes, cucumbers and lettuces year-round. During the same time, small family farms were often adding greenhouses to complement their traditional open-field production.

During the next decade, the major suppliers of field-grown vegetables in Canada and Mexico also began focusing on greenhouse production. The 2000’s firmly established CEA vegetable production as a viable commercial growing method.

In the 2010’s, vertical farming became more mainstream when Dr. Dickson Despommier published the book, The Vertical Farm: Feeding the World in the 21st Century. Vertical farms are essentially plant factories, with multi-level grow systems in insulated buildings using only electrical light instead of sunlight for plant growth. Although there were most likely small scale vertical farms before it, Sky Greens in Singapore was the first vertical farm to begin large scale commercial operations in 2012. Vertical farming became more commercially viable largely because of the advancing technology of Light Emitting Diodes (LED). These distributed light sources are less energy-intensive than the industry standard high-intensity discharge lamps, but more importantly, allow growers to move lights closer to the crop without burning or overheating. This enabled business developers to stack hydroponic grow systems, producing significantly more greens in increasingly smaller spaces. Now confined urban areas where arable land is very limited, could become producers of locally-grown, fresh food.

Protected cultivation has been in America at some level for two centuries, but what technological advancements made feeding the world with controlled environments possible?

Microprocessors
The microprocessor with its accuracy, consistency, data storage and simultaneous interpretation of multiple types and number of sensors has allowed the grower to tend more to plant production and much less to environmental control. No longer must the grower walk the greenhouse each morning to adjust the ventilation openings based on a guess of the day to be sunny, rainy or cold. Sensors are available to determine critical environmental plant needs and to make precise responses to air temperature and humidity for VPD (vapor pressure deficit) which affects plant transpiration and photosynthesis; light intensity with quantum sensors to determine DLI (daily light integral) which is directly related to desired growth or production rates; and, pH and EC which affects plant nutrient availability. When all combined, the grower is provided an improved understanding of the plant response to its environment. All this can be obtained on request in real-time by cellphone or within a report upon early morning arrival of the grower to the greenhouse each day.

Even more valuable is the capability of the computer to save data and further process it into useful information, which directs better grower decisions. Expect additional sensor development and implementation in the future to provide higher quality information about the food products, such as its flavor, sweetness, or nutritional quality.

The automation of information, although critically important, may become second in importance to labor-saving automation. Labor is often a farm’s biggest expense and the agricultural talent pool is limited nearly everywhere, but a high-tech farm’s food safety and security are dramatically enhanced when human contact with the edible product is reduced or eliminated. Production system automation that removes the need for people to work in groups on production lines is becoming crucial within this new world of viral pandemics.

There are still many advancements to be made in CEA. Technologies and experiences were transferred from the established greenhouse industry and applied to the developing indoor vertical farming industry. From LED lighting ‘recipes’ to plant nutrition under those recipes; from materials handling and logistics to labor management, years of R&D are required to reach optimal solutions for the plethora of combinations of plant cultivars, stages of growth, and harvest expectations within each type of CEA system.

The challenges remain for educating the people managing and operating the controlled environments. Educated employees working within a production process that is logistically sound, labor efficient, and task friendly are critical considerations for successful CEA businesses. Even with automation, the required work of skilled employees will remain, but at a higher educational level and a lower quantity.

In the future, it’s entirely possible that a CEA system will be able to autonomously program itself, or modify the plant environment without being directed, but for now, the plant production experience of an educated grower or crop manager is still required even in the most high-tech operations. Additional developments for successful CEA businesses include breeding of plant cultivars optimized for CEA production; emphasizing the importance of marketing; valuing employee education and experience; accepting that growing plants is a skill and an art; and, understanding basic physical principles that follow the laws of physics and biology!

CEA is still in such an early stage of commercial viability, but the blueprints for successful ventures continue to be created by intelligent and increasingly well-equipped entrepreneurs. As we look at the timeline of its commercial origins, to the critical technologies that made it work, we can see how far it's come, but also the potential the future holds for feeding the world with controlled environments. 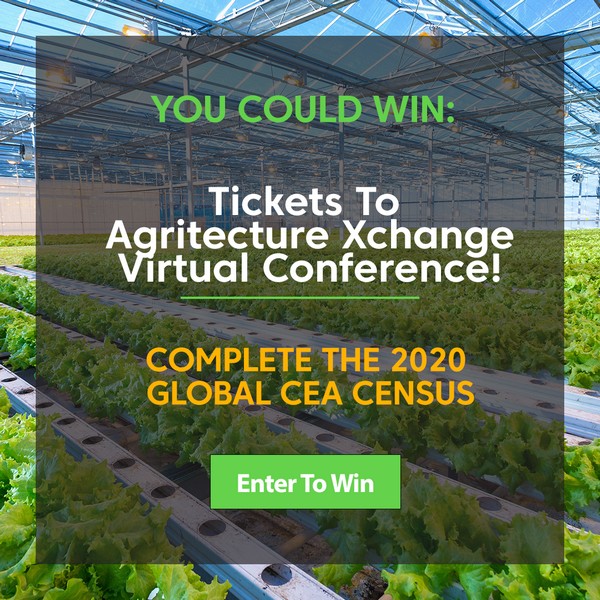 Have you participated in the 2020 Global CEA Census? Autogrow and Agritecture Consulting have launched their 2nd Annual Global CEA Census, focusing on understanding the impact of the COVID-19 pandemic on controlled environment agriculture (CEA) operations around the world. The 2020 Global Census runs from July 7th to August 10th. Those who complete the census are entered to win different prizes from Agritecture and Autogrow.