The European production of fresh tomato is expected to decrease by 2% in 2020. This trend is driven by a decline of production in Spain (-7%), which is the largest producing country. 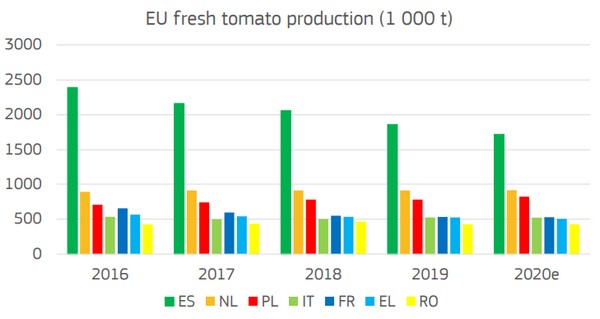 Production in other European countries should overall be stable: decreasing yields due to a further focus on the production of smaller-sized and high value-added tomatoes should be balanced out by the  extension of the duration of the winter production. The European production of tomatoes for processing is expected to increase by 1% this year. This should result in an, overall, stable tomato production.

Turkey
Turkey is gaining shares in fresh tomato imports. The COVID-19 measures stopped the food service demand, which affects the demand for round tomatoes in particular, and pushed prices down. At the same time, home consumption, in particular of small-sized tomatoes, increased. On balance, the European consumption of fresh tomatoes is expected to slightly decline in 2020 by 1%. 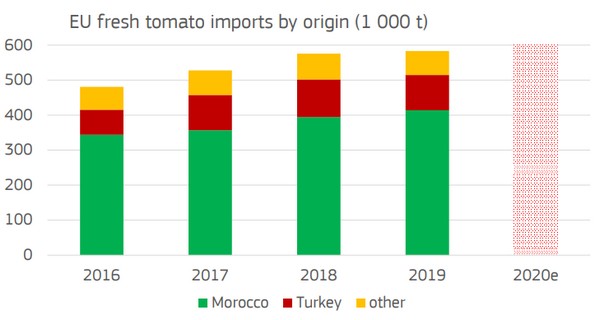 European exports of fresh tomatoes were down by almost 20% in January to April, due to COVID-19 measures which caused logistical problems and increased transport costs, but have been dynamic since then. Overall, a decline of 7% is expected for 2020.

Imports of fresh tomatoes are expected to continue to increase in 2020. Whereas Morocco accounts by far for the largest share of imports (in 2019, 71%), imports from Turkey (17%) were 37% above import numbers in January - April of this year, as opposed to last year. Imports from Morocco rose by only 3%, being more affected by COVID-19 related logistic difficulties.