Dutch tomato grower on its way to 44 hectares

On the 11th of June, the documents were signed for the purchase of land for the construction of greenhouse West and greenhouse South at nursery Schenkeveld Schiphol. It is the continuation of the construction of two 11-hectare projects from 2017 and 2018. "With this purchase, we have all the land we need to expand to the planned 44 hectares at this location," says Richard Hartensveld. Construction is slated to begin in 2021. 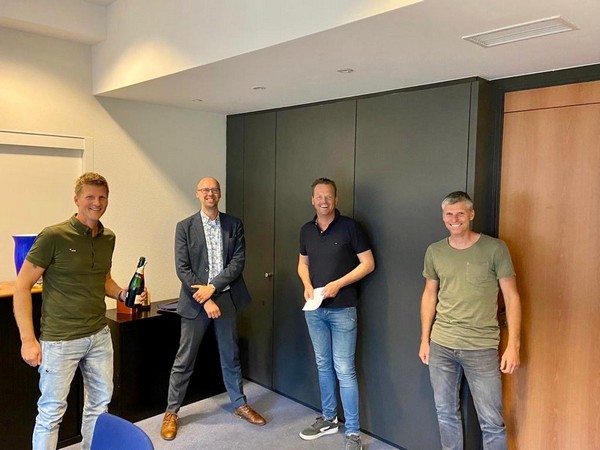 Smiling faces and champagne after signing

Now, three years later, Schenkeveld Schiphol cultivates TOVs in two 11-hectare greenhouses and more than 300,000 kilos of vine tomatoes can be processed every day. "With our current facilities, we are prepared for the construction of the two additional greenhouses," explains Richard. "Only for the energy and water supply, for example, some adjustments need to be made."

Lighting is 'an option'
It is not yet decided whether the greenhouses, which most probably both will have to be completed in 2022-2023, will be lighted. "It is an option, but because we are not yet going to begin construction this year, we have time to think carefully about the layout and installations, also in terms of canteens and changing rooms, for example, because they will have to be added to the new greenhouses."

Schenkeveld merged with another Dutch grower, Kwekerij De Kabel, in early 2019. "We see the added value from this every day," said Richard. “An example is the strength you create together. This way you are better able to deal with new developments in a flexible way, such as tightening up the necessary hygiene protocols."

Making plans
After the construction of the first two greenhouses, time was taken to have everything running smoothly. The time was also used to ensure that sufficient space is available for the expansion plans. This is now the case for the current building plans.

“Now we are completely organized and are going to make further plans for the new construction at Schiphol”, concludes Pieter van der Wel, Location Manager Schenkeveld Schiphol. "I like a thorough preparation when it comes to this new construction project, so that everything will run smoothly during the project!"