"Twenty years ago, quite a lot of tomatoes were imported, but that is no longer the case"

Havecon built the first phase of a new construction project for Intergrow, a grower of various types of tomatoes in New York, which was completed in the fall of 2018. The total acreage of the grower, established in 1998, currently amounts to 39 hectares. In November 2018, the first cultivation started in this new greenhouse and the second one is already in full use.

Intergrow has four Dutch / Belgian owners. Dirk Biemans is responsible for "basically everything, except cultivation". That is Mario van Logten's concern. Two other owners are Dirk van den Plas and John Vermeiren, who both don't live in the US but come over from Belgium a few times a year.

Dirk Biemans went to America after completing his military service. "In 1998 I co-founded a 6-acre greenhouse in Fillmore, NY with the 'local for local' principle. That caught on. Twenty years ago, quite a lot of tomatoes came from the Netherlands and Belgium, but that is no longer the case today." 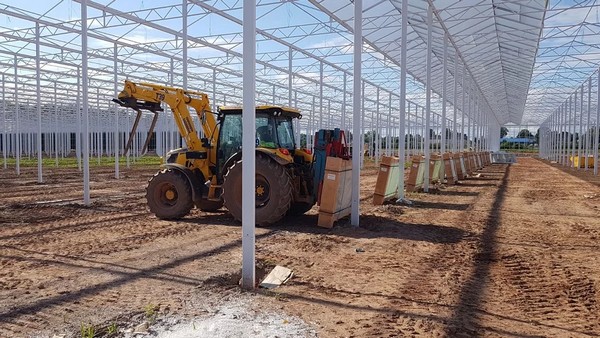 About the origin of his collaboration with Havecon, Dirk Biemans says: "Me and my co-founders initially had Havecon not on our list at all. But Henk Verbakel heard about our expansion plans and asked us if he could come and talk at the company. During his visit Henk quickly convinced me (and my associates) that we would do well to work with them. With that, the first project for Havecon in North America was born in 2011."

The development and construction of that project was immediately satisfactory. "Of course there are always small hick-ups and things happen that were not foreseen before. But Henk and his team stand for what they say and promise and that has laid the ground for further expansions, which were all done with Havecon afterwards.

In extension project 2, construction partner Voorwinden Groep was also involved and you immediately noticed that these parties are a well-oiled machine together. With that in mind when the expansion of 2018 came up it was a no-brainer to go for Havecon again."