Although restaurants are starting to reopen and COVID-19 restrictions are being lifted, the European tomato market is still under pressure. Prices are still on the low side (not unusual for this time of year), and there is a lot of supply. In some tomato segments demand is bouncing back a bit though, giving some growers hope.

'Major step'
For cherry and snack tomatoes, a 'major step' has been taken in price since the beginning of June. "Supply from North Africa and other areas is low, and with the weather in the Netherlands also not being great, the balance in the market is starting to return", comments Fokke Dullaart of Harvest House. "We're past the peak. We really had to take action to push the large volumes at first due to the good weather, but now trade is going much more smoothly. Prices are better too, and customers are willing to pay higher prices, although it's not yet at the regular level yet."

'Round tomatoes abysmal'
With his 67 years of age, Dirk van Nieuwkerk, purchaser with Anaco Greeve, has seen it all when it comes to the tomato trade. This year the market situation for Dutch tomatoes is nothing to write home about. "It's been bad for weeks, really," the purchaser says. An attempt to raise the prices this week was also unsuccessful. "The situation is particularly abysmal in round tomatoes. Fast food franchises and sandwich shops normally use those a lot for cutting, but now they lost a large share of their sales."

"Sales of TOV aren't doing that well either. When you see they're being auctioned for 28 cents per kilo, there's little left for the grower. We do expect lower supplies though. That's why initially I was optimistic about the market bouncing back, but I don't see that happening just yet. It's doable when you have a 30-35% lower volume available, but when demand drops by 70%, things grind to a halt. In recent weeks Belarus still bought quite a few tomatoes, we could use that business in the coming weeks as well."

Analyzing the figures
When looking at the tomato figures as published by the European Commission, it becomes clear that average prices in the cherry, TOV and round segments have gone down pretty much everywhere, compared to April.

There's really only one exception: Poland is showing an increase in the average price in the round tomato segment by 73% compared to April. Growers receives 2.10 euros on average for their product, although statistically speaking one could make a side note or two about that. In other countries, growers could only dream of prices like that.

The same stability is noticeable in the Netherlands, with a slight increase in week 22, to 71 eurocents, 1 cent below the average price in week 22 of 2019. In that year, a price hike followed, and 60-cent prices didn't appear again until week 34. For this year, things are also looking cautiously optimistic given the market situation early June.

Elsewhere in Europe, Italy has taken a hit in week 22, with the average price going down by more than thirty cents. At 1.67 euros, the price was a lot lower than the average price in previous weeks, when it was consistently above 2 euros.

The situation in Spain is comparable to the Netherlands, with a slight increase in week 22 (and week 21) as well.

In France, a major price hike is noticeable. Compared to week 21, the average price in week 22 increased from 2.32 to 3.23 euros there.

TOV
In TOVs, the situation is also pretty stable across the board in Europe, with prices varying between 62 and 74 eurocents. These price levels are comparable to the same period in 2019.

The same is seen in Belgium, where prices hit 37 eurocents for the second week in a row.

Round tomatoes
Across the board in Europe, the average price for round tomatoes is increasing somewhat, with 90 eurocents in week 22, while this was 65 cents in the week before, which was predated by prices between 73 and 76 cents.

Prices in Belgium are low here, just like in TOVs, with 32 and 33 eurocents respectively in week 21 and 22. In the week after, the price is more or less stable at 37 eurocents. The Netherlands isn't doing much better, as Dirk already told us.

In Spain, the price is increasing to an average of 68 cents, following averages of 50-57 eurocents in weeks 17-21.

A major exception to all reports on declining prices is Poland. There they saw prices increase by 73 percent from April to May, with the average price in May amounting to 2.10 euros (compared to 1.22 in April). 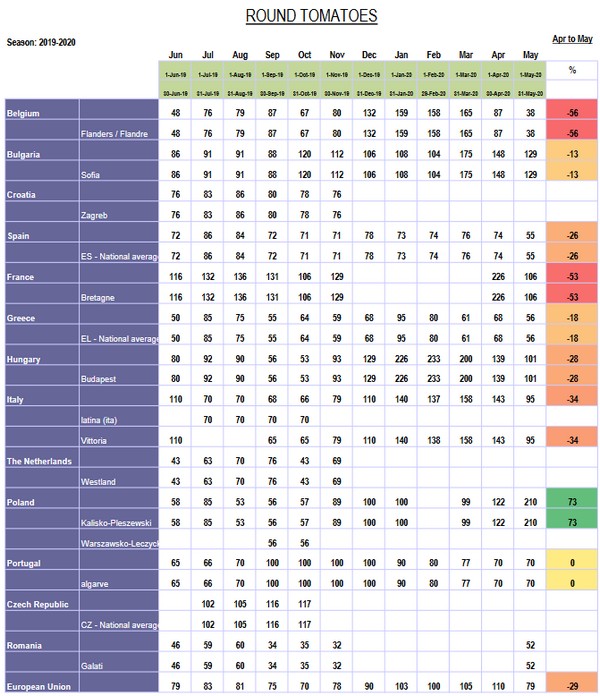