"Smarter energy usage is key to a greener future"

LED lightbulbs, programmable thermostats, high-density insulation and electric vehicles — despite these innovations, about two-thirds of the energy produced in the U.S. is lost to inefficiencies, according to national studies.

For scientists and economists who work on the barriers between people and a sustainable future, that’s a dire number, but modern data management is helping to reduce it.

“We have plenty of energy; we just don’t use it wisely,” said University of Georgia Regents Professor Richard Watson. “You see it all the time: heating rooms when there’s no one in them or having the wrong lighting settings for the use of the room. Some of these might seem minor, but if you make these changes throughout a large institution or make them across institutions it could have a big impact.” 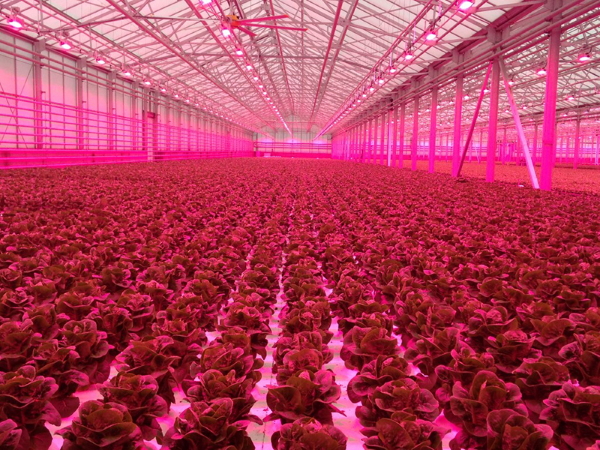 Lettuce is grown under red LED lights at a research greenhouse. U.S. growers spend about $600 million per year on electricity for lighting in their greenhouses and plant factories. (Photo by Neil Mattson)

Watson, who holds the J. Rex Fuqua Distinguished Chair for Internet Strategy, and his research co-author Maric Boudreau pioneered the field of energy informatics at UGA’s Terry College of Business and many other universities. For the past decade, they’ve focused their research and trained students to use big data analysis to optimize energy use systems in skyscrapers, universities, factories and other large-scale energy users.

“We are thrilled that many universities around the world have embraced energy informatics, that a journal and conference have been created and that many scholars have contributed to this stream of research,” said Boudreau, who heads the college’s department of management information systems. “Moreover, it is exciting that many of our undergraduate and graduate students get to learn about energy informatics through the elective class the MIS department has been offering every year since 2011.”

Recently, they turned their attention to greenhouse growing, which is essential to produce fresh vegetables and flowers to match market needs, such as flowers for Mother’s Day.

“Greenhouse growing is seen as the key to solving far-flung problems, from food issues in Dubai or Alaska to calls for farm-to-table produce in arid tourist destinations like Las Vegas,” said Marc van Iersel, a UGA horticulture professor in the College of Agricultural and Environmental Sciences working with Watson and Boudreau.

A major roadblock to the future of this type of farming is the cost, most of which is tied to energy use. U.S. growers spend about $600 million per year on electricity for lighting in their greenhouses and plant factories.

Already, using just existing lighting and environmental control technologies, Watson and Boudreau were able to use the energy informatics framework to create energy use simulations that showed a 30% savings in the cost of producing a greenhouse crop.

Further reductions in energy use may be realized as the research team experiments with new lighting technologies and plant productivity, van Iersel said.

This marriage of data and new technologies will be key to reducing global energy demands in greenhouses, office building, schools, hospitals and homes, Watson said.

“U.S. energy efficiency increases by about 2% a year, and that’s been fairly consistent,” he said. “That’s about the growth rate for increases in energy use for all of our new devices. So if we could get our energy efficiency growth up to something like 3% per annum we would gradually reduce our energy requirements. The long-term goal should be to generate less energy and still do everything we need to do because we’re more efficient.”

This incremental reduction in energy is going to take more research in the field of energy analytics and more energy informatics training for future business leaders, Watson said. Terry’s MIS faculty are equipping students with the analytical skills they need to fill the growing number of open positions and business opportunities focused on sustainability and resource management.

To learn more about Project LAMP and its multidisciplinary team of researchers from UGA and cooperating institutions, visit hortlamp.org.