What do papayas, vanilla and black pepper have in common?

Do you recognize the second plant from the left in the below picture? Most of the participants in the webinar on the Greenhouse Pharmacy project, held as part of the WUR Urban Greenhouse Challenge, had no problems seeing this was a vanilla orchid. It got a bit trickier when Professor Wouter Verkerke asked about the plant on the right though. Is it a Mimbulus mimbletonia, for instance? (Harry Potter fans will know this wasn't the correct answer - it's a Scutellaria baicalensis, a Chinese medicinal plant.)

The interest of Wouter Verkerke and his team in Traditional Chinese Medicinal plants shouldn't come as a surprise to anyone familiar with the Greenhouse Pharmacy project. It seeks to enable a new transition in a long history of agricultural shifts, comparable to when growers in the Dutch Westland region moved from growing table grapes to other crops in the 1950s, like cucumbers and tomatoes.

"We saw an increase in demand for natural ingredients, as well as demand for locally cultivated crops, with local-for-local production becoming more and more important", Wouter explains the motivation behind the quest for somewhat exotic crops to be grown in the greenhouse. "Consumers want a real part of Mother Nature on their plate." He explains that nowadays, consumers are not satisfied anymore with synthetic alternatives to vanilla, for instance, calling new crops like the "pearls in the crown" of a complete horticultural sector. 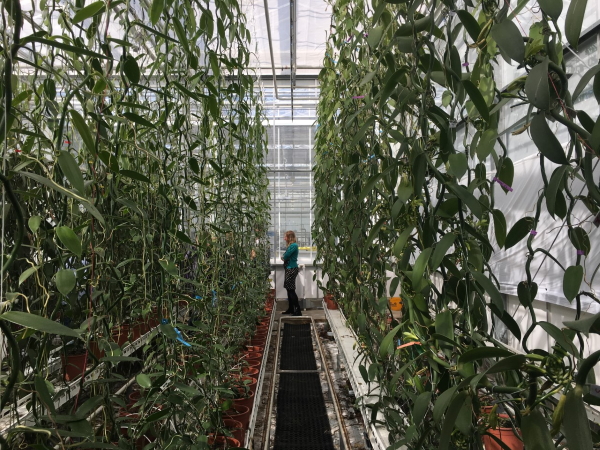 Vanilla
Let's start with vanilla. Vanilla, Wouter explains, originates from Mexico, growing at 20 meters above forest floor. The bees actually do a very bad job, they pollinate just enough for speciation and survival, but not enough for any agricultural application. Add to that the fact that, although there are countries that specialize in this crop, such as Madagascar and Réunion, there isn't nearly enough production to meet the world's needs, and you'll soon realize that's a recipe for a highly volatile market.

Greenhouse cultivation, Wouter explains, could provide the necessary market stabilization here. And the crop can be grown in the greenhouse. It takes a pretty conventional high-wire cucumber cultivation system to yield excellent quality vanilla, on par with what you'd get from nature. 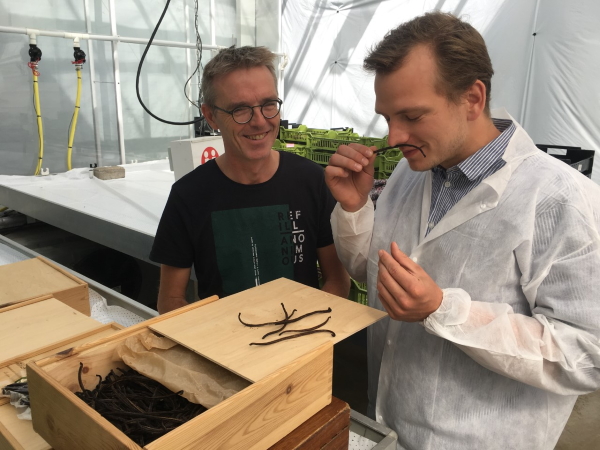 Black pepper
That vanilla can be grown in a greenhouse may not come as a surprise, but what about pepper? We're not talking about the red, green or orange (Capsicum) ones here, but about black pepper (Piper) - as in, the stuff you find on tables next to the salt.

The berries of the black pepper plant, Wouter explains, actually start out green. It's only when they're dried that the fruits turn black. At the Greenhouse Pharmacy, they're in the process of testing various new varieties, some of which are very promising when it comes to aromatic qualities.

These trials didn't just materialize by chance - the Dutch industry asked for it. Wouter: "They said, 70% of imported pepper is so full of pesticides that we can't use it for the sauces we make for Dutch brands. Modern consumers don't want pesticides on their plate. One option to combat this is to implement biological control in producing countries, but another option is to add production to indoor greenhouses."

Black pepper isn't a difficult crop to grow, behaving in much the same manner as sweet pepper crop that is already being grown in greenhouses. "You can grow them with high-wire cultivation, and we found out how to work with humidity, temperature, and how to apply biological control. If you can grow sweet pepper in high wire, you can cultivate black pepper."

The team with the Greenhouse Pharmacy are still working on setting up a commercial project in black pepper. Samples have been provided to vegetable shops and local chefs, who are, in Wouter's words, "crazy about the product", but the upscaling of this "wonderful part of Mother Nature" will have to wait just a bit longer.

Papaya
The same can't be said about papaya, which has become somewhat of a poster child for the project. Faced with huge supply problems, Dutch and German retailers asked wholesalers: "You're so good with your tomatoes, cucumbers, peppers and such, but tropical fruits are always a problem. Can you do something about it?" Those wholesalers in turn talked to growers, whom Wouter knew and put in touch with people who make new cultivation systems for indoor growing.

Wouter believes such systems can be set up everywhere in the world, not to take over the current production systems, but rather as a supplement, an addition. “The Greenhouse Pharmacy is a case in which we try to develop added value for growers in the Netherlands. In your challenge you have to find your own answers to value creation. I would not rely on high tech urban cultivation alone when it comes to feeding the population", according to Wouter, "you also might need a system of 'Green Belts', just as they developed in our history of Greenhouse Horticulture. These could be high tech, low tech, or middle tech. But Urban Horticulture could have alternative, perhaps supporting functions. Business models have to be developed for it, and I presume it is worthwhile to study the local environment and history to develop systems that produce product people want to pay for."

Oh, and in case you're wondering how to fit a papaya tree in a greenhouse, as one of the participants in the Q&A asked - it's actually not that difficult to create smaller versions of many crops, as Wouter explained, comparing it to modern apple orchards, where you'll find smaller shrubs rather than tall trees.

Finding consumers
Wouter ended the seminar by addressing the participants in the Urban Greenhouse Challenge, offering them some helpful advice. For instance, plants grow easily, but getting the supply chain sorted and gathering skilled labor might be a challenge. And, as Wouter concludes, while greenhouses may not be a solution for every plant, "Plants just love greenhouses, you just need to find people willing to buy the products."