Dole Food Company is taking its line of ready-to-eat salad bowls national with the launch of Dole®  FreshTakes™ Salad Bowls in supermarkets throughout the West following a successful debut in the Eastern U.S. in 2019.

To appeal to a spectrum of salad lovers, Dole is offering four flavor varieties with meat protein and two varieties without – the same classic and regional recipes that have performed well in the East. 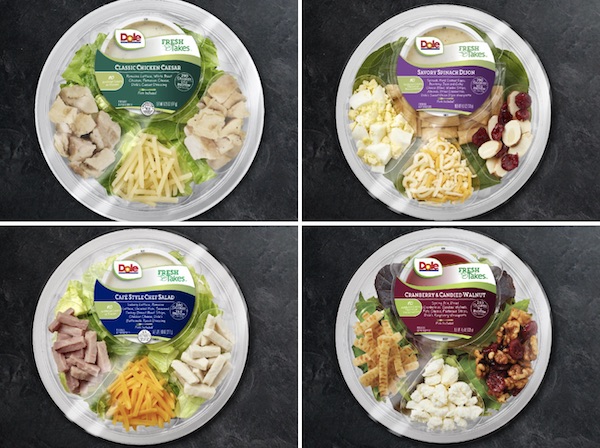 “The ready-to-eat salad market is expanding as Americans increasingly want a fresh salad experience that is flavorful and convenient, and delivers a satisfying meal,” said Lisa Overman, Dole’s director of brand marketing for North America.

The six single-serve Dole®  FreshTakes™ Salad Bowls started shipping to retail nationwide on May 19 with a suggested retail price of $3.99.

According to Overman, the FreshTakes™ line was developed and timed specifically by Dole’s product innovation team to offer salad users distinct, discernible advantages over existing RTE salad bowls on the market.

“While Dole may not be the first to offer ready-to-eat salads, our intention is always to provide salad lovers with a full-flavored salad that delivers quality ingredients and differences they can see, taste and appreciate,” she said. “For FreshTakes™, this means a short list of clean-label ingredients you can pronounce without artificial colors, flavors or preservatives. It also means flavorful, white-meat chicken, plus Dole’s toppings and signature dressings to create a balance of flavors and textures that deliver truly ‘craveable’ salads.”

Beyond the six single-serve core salad bowls, Dole announced plans to extend the national FreshTakes™ line later this year with the introduction of new flavors that bring even more variety to the category.