From hops to tomatoes, Jack Rechcigl is considered a leader in research for vegetable, floral and strawberry production and breeding. Known worldwide for his support of growers and the agriculture industry, his enterprising scientific approaches to agriculture and urban environments has him serving double duty. Now he has been appointed as interim Center Director of the UF/IFAS Fort Lauderdale Research and Education Center (UF/IFAS FLREC). 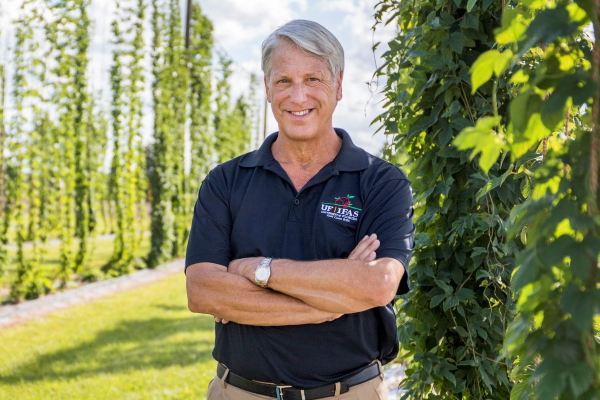 On May 12, Rechcigl stepped in to oversee the operations and research at the UF/IFAS Fort Lauderdale Research and Education Center, previously led by retiring center director Robin Giblin-Davis. Giblin-Davis, who first took the helm of the facility in 2009 as acting co-director, transitioned in 2017 to serve as sole acting center director. He is an internationally celebrated scientist, whose area of study has been applied and basic research concerning soil, plant-parasitic and insect-associated nematodes and nematode biodiversity. He retires as an emeritus professor after 35 years at UF/IFAS.

“My role as Center Director is to support and mentor the award-winning scientists, faculty and graduate students who are dedicated to solving the local and regional agricultural, urban and wildlife issues that comprise southeast Florida’s unique make-up, while continuing the mission of FLREC,” said Rechcigl. “The caliber of research conducted by these dedicated scientists is impressive and addresses the unique needs and issues that growers and community residents face in South Florida’s combined agriculture and urban environment.”

Areas of research at FLREC include sustainable management for tropical and subtropical landscape systems. Scientists also aim to reduce the impact of invasive animals and plants on natural and highly urbanized habitats. Other areas of research include termite identification and distribution, wildlife ecology and conservation, palm production and maintenance, environmental horticulture, aquatic plant management, turfgrass science and sea level resilience in South Florida.

As interim Center Director, Rechcigl will serve double duty. As an internationally recognized professor in the soil and water sciences department at UF/IFAS for the past 34 years, Rechcigl served as the lead architect of the programs and is the current Center Director of UF/IFAS Gulf Coast Research and Education Center (GCREC) in Balm, Florida. since 2005. The state-of-the-art center operates from two sites. The 475-acre main facility in Balm, located in southern

Historically, GCREC has been recognized as a premier research site with efforts since the mid-1920s in tomato, strawberry, vegetables, ornamentals and landscape crops. Over the last 20 years, Rechcigl has led the charge with faculty members in making substantial contributions for the continued production and health of these industries, as well as exploring new opportunities and alternative crops for the region that include pomegranate, blackberry, industrial hemp and hops. Rechcigl has established the highly successful Florida Agricultural Expo, which is attended by 1,000 farmers, politicians, government and university officials from around the country each year.

Research at GREC has also been focused on improving sustainability through the development of precision agricultural technology. Some examples include tractor software that can distinguish crops like tomatoes and strawberries from weeds for precise herbicide application and the use of ultraviolet light to treat and prevent Powdery mildew (Sphaerotheca macularis) on strawberries.

Before joining the Bradenton facility in February 2000, Rechcigl was stationed at the UF/IFAS Range Cattle Research and Education Center at Ona. At the Ona center, he conducted research on the fertilizer requirements of pasture grasses and the effects of fertilizer on surface and ground water quality. This work led to the revision of fertility recommendations and the development of BMP’s for pasture management, resulting in both economic and environmental benefits.

Rechcigl received his Bachelor’s degree in plant and soil science from the University of Delaware in 1982. He completed his Master’s and Doctoral degrees in soil, crops and environmental sciences at Virginia Polytechnic Institute and State University in 1983 and 1986, respectively. He joined the UF/IFAS faculty in 1986 as assistant professor, in 1991 was promoted to associate professor, and in 1996 attained full professorship. In 1999, he was named University of Florida Research Foundation Professor. He is a Fellow of the American Society of Agronomy (1998) and Fellow of the Soil Science Society of America (1999).

Rechcigl has authored over 300 publications and is recognized nationally for his work in the fields of soil fertility, environmental quality, and water pollution. His research has been supported by research grants totaling over $3 million from both private sources and government agencies.

He is currently editor-in- chief of the Agriculture and Environment Book Series, as well as having served as associate editor of the Journal of Environmental Quality.