In South Carolina, invasive hornet uproar is much ado about nothing

A two-inch-long insect found dead six months ago on the other side of our continent has become the media’s latest cause celebre. But among the scientists who deal with invasive pests, the bigger problem isn’t the hornet, it’s the hysteria.

“The chances that Asian Giant Hornets are in South Carolina are about zero,” said Eric Benson, a Clemson University Extension entomologist and professor emeritus. “The chances that they will arrive and establish themselves in our state anytime soon are also close to zero. And even if they do come here one day, we will be fine. There are far more dangerous things in our state to worry about.”

That hasn’t stopped phones from ringing off the hooks for officials like Brad Cavin, the chief apiary inspector for the Department of Plant Industry (DPI), a state regulatory program based at Clemson.

“Especially in the middle of the COVID-19 situation, when people are already antsy, a bunch of scary talk about an invasive species naturally will make them nervous,” Cavin said. “But right now this hornet is approximately 3,000 miles from South Carolina. The only confirmations we have in North America are from Washington State near the Canadian border in December 2019 and from Vancouver, British Columbia, in August 2019.” 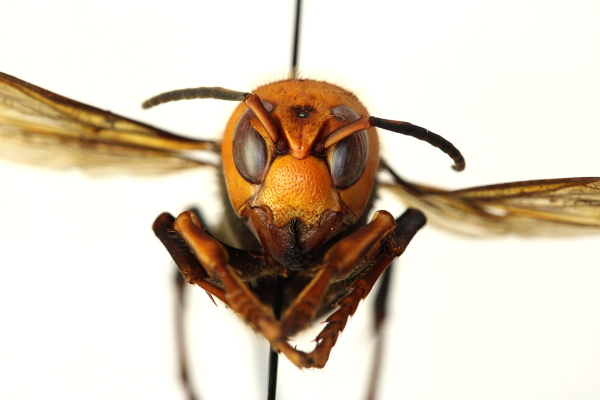 There have been no verified reports of Asian Giant Hornets since, Cavin said, but there’s been plenty of hornet reporting in the news. The recent deluge appeared after Washington state agriculture officials asked its citizens to keep an eye out for the distinctive insect, which returns to activity in the spring after the ground-nesting queens emerge from hibernation.

What began as a wise local precaution went coast-to-coast. Add social media to the mix and suddenly the nation was confabulating about a crisis that, as far as anyone could tell, it didn’t yet have. 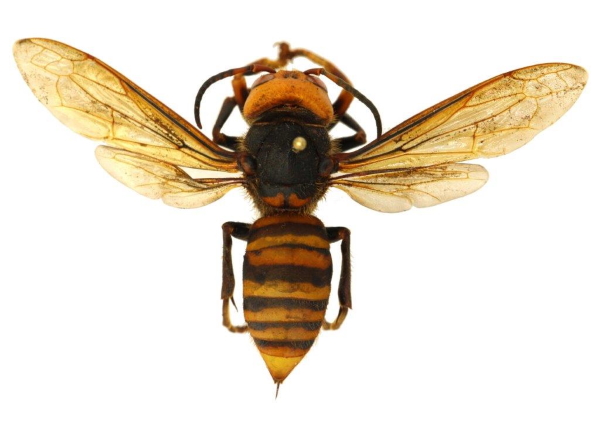 Capable of growing two inches long, the Asian Giant Hornet has big, dark eyes on a light orange head. Its midsection is dark brown and its abdomen is striped with bands that alternate between a dark brown or black and a yellowish orange. Image Credit: Washington State Department of Agriculture

The Asian Giant Hornet, or Vespa mandarinia, and its subspecies the Japanese Giant Hornet, Vespa mandarinia japonica, are the largest of 23 known species of hornets. They are formidable predators of wasps and bees. Their venom, in large enough doses, is capable of killing animals and even people who have suffered sufficient stings.

“You have to realize that a lot of insect stings can kill,” Cavin said. “This one is responsible for dozens of human deaths each year across the whole of Asia. But it is far more dangerous to other wasps and bees, especially to honey bees, which are much smaller.

“Agriculture officials all over the country are determined to keep this hornet from establishing itself here,” he said. “Our state Apiary Inspection Program is working on a trapping plan to monitor South Carolina. We were already finalizing those plans before we all had to adapt to COVID-19.”

Although the Asian Giant Hornet is not an immediate threat in South Carolina, it does raise concerns for Palmetto State beekeepers who already are battling other invasive pests, said Ben Powell, Clemson Extension Service apiculture and pollinator specialist.

“Annual colony losses have increased after other exotic pests such as small hive beetles and Varroa mites were introduced into the United States.  Introduction of another hive pest could adversely impact apiculture in South Carolina and Asian Giant Hornets are just one of many overseas pests that regulators hope to keep out of South Carolina,” Powell said. “Asian hornets (Vespa velutina), closely related to the Asian Giant Hornet, invaded western Europe several years ago and caused significant damage to honey bee colonies, and the concern is that Asian Giant Hornets could cause similar problems here were they to spread.”

Although most Clemson Extension offices are closed and Regulatory and laboratory personnel already thinly staffed because of the COVID-19 crisis, extra pairs of eyes are always appreciated, said Steven Long, DPR assistant director.

“There’s very little chance this pest is already in our state, but we need concerned citizens always to be on the lookout for other invasive species. We highly encourage them to contact us at invasives@clemson.edu anytime they suspect a pest that doesn’t belong,” Long said.

“Due to COVID-19 our lab is currently operating under modified operations status and reduced hours. Until we return, clients are encouraged to send, at no charge, photographs of suspect Asian Giant Hornet to ppclnc@clemson.edu or to State Entomologist Tim Drake at tdrake@clemson.edu in lieu of sending physical samples,” he said. “Also because of COVID-19, we are currently not accepting samples for insect identification of a biting/stinging nature unless submitted in ethanol by a physician, public health official, pest control operator, or Clemson Extension or Regulatory personnel.” 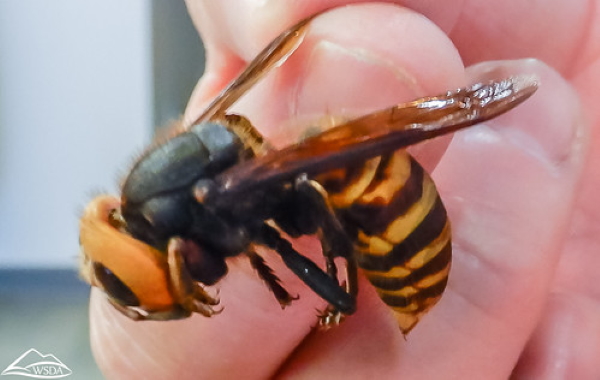 The Asian Giant Hornet is the largest of 23 known species of hornets. It preys on other species of wasps and bees. Image Credit: Washington State Department of Agriculture

Regarding the Asian Giant Hornet, Tim Drake, the state entomologist, offers some encouraging words for the wary.

“It is a ground-nesting hornet, inhabiting rodent burrows and areas around dead tree roots. Pine trees in British Columbia were where the only live colony has been found so far, in 2019, and it was destroyed,” Drake said. “Because it is a ground-nesting hornet that inhabits animal burrows, it is not likely to be transported into South Carolina in commodities, and therefore it is not an immediate threat here.

“There is no need to impose any sort of quarantine here for this invasive pest because there is a very low probability that a colony would be transported into the state,” he said. “Although a single gravid female hornet could start a colony here, the likelihood of the accidental transport of such a female over such a long distance is very low.”

Adults of the species can be as much as 2 inches long. “The Cicada Killer is the only wasp in South Carolina that even approaches that length and its appearance is very different,” Drake said. “Also, Cicada Killers are solitary ground nesters and do not nest in colonies or hives like the Asian Giant Hornet.”

The Asian Giant Hornet has big, dark eyes on a light orange head. Its midsection is dark brown and its abdomen is striped with bands that alternate between a dark brown or black and a yellowish orange.

“It is not an aggressive hornet but will defend its colonies and will sting humans if nests are disturbed the same as other ground-nesting wasps,” Drake said. “Unless a person is allergic to wasp stings, it takes numerous stings from these hornets to cause great harm. Most human deaths in Asia have resulted from over 50 stings.”

“If you are to be concerned about stinging wasps, it should be about our native yellow jacket species,” Benson said. “Yellow jackets are much smaller than hornets and in natural settings can be beneficial, feeding on insect pests in our gardens. However, a mature colony can have thousands of individuals, far more than a hornet’s nest.

“If yellow jackets establish their nest in or close to an area where people frequent, they can become defensive if they feel the nest is threatened,” he said. “The sheer number of yellow jackets that may attack a person or animal makes them far more dangerous than a hornet.”