but market challenged by coronavirus

The cultivation of strawberries in greenhouses (or tunnels) is growing all over the world. New numbers show that in the Netherlands, strawberries have become the nations 4th greenhouse crop, with an acreage of almost 500 hectare and an estimated yield of 51,8 mln kg.

And it's not just Netherlands where this crop is cultivated more and more in protected areas. Also in Canada and US larger scale greenhouses have been filled with the red fruits - although the cultivation has proven to be a challenge and also the market is not an easy one. The costs of indoor strawberry cultivation are much higher than the outdoor ones and that plays also an important part in the market. Let's take a look at the global market developments.

The strawberry sector is suffering the impact of the coronavirus. Since consumers currently prefer fruit with a longer shelf life, strawberries are ignored. In Spain, this has resulted in the supply being higher than the demand, while growers in California are working carefully to avoid an overproduction. In France, however, the situation is the complete opposite. The government's call to buy local produce and the refusal to import Spanish strawberries has allowed the demand to become greater than the supply. 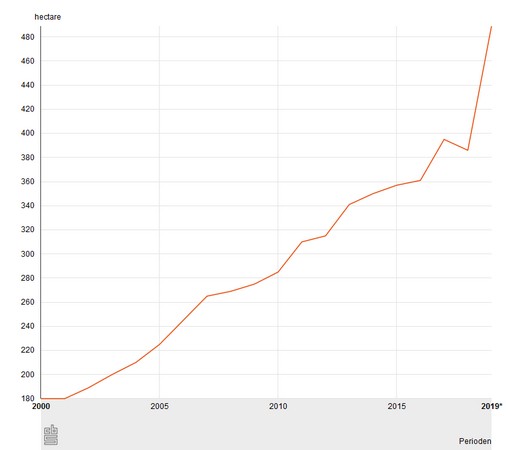 Strawberry area growth under glass and tunnels in Netherlands 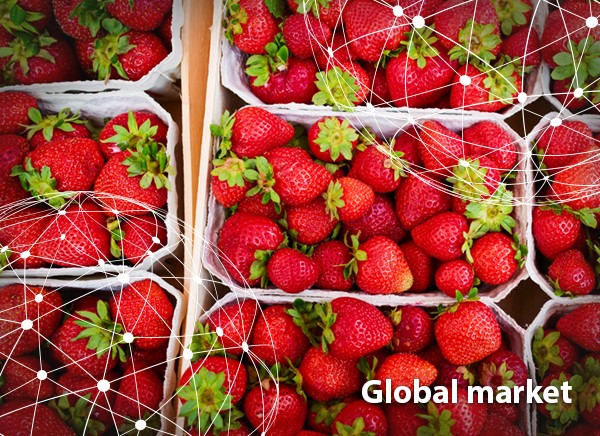 The Netherlands: Sunny start for Dutch greenhouse strawberries
According to Dutch traders, the start of the Dutch greenhouse strawberry season has been easier than in previous years. The growth of the Dutch greenhouse strawberry acreage has not been nearly as exceptional as in previous years, but with the Spanish and Moroccan seasons ending earlier due to the bad weather and the shortage of pickers, the switch to the Dutch season was quickly made. As expected, the demand ahead of Easter was good, but the decline afterwards hasn't been nearly as great as in previous years, which means that volumes can be marketed for reasonable prices. With next week's good weather, Mother's Day and a Norwegian holiday ahead, prospects look favorable, as far as the demand is concerned. Day trading has now come under some pressure, with payout prices ranging between 2.40 and 2.80 Euro per kilo, but Dutch traders are not concerned about this ahead of the coming week.

Belgium: Season has got off to a good start
The Belgian strawberry season started well. The quality was good and prices have also stood at a consumer-friendly level. So far, Belgian strawberry sales have gone well, partly as a result of Belgian retailers switching earlier to the domestic production. Belgian strawberries have also benefited from the increase in fruit and vegetable sales at supermarkets due to the corona crisis. Volumes are now starting to grow and exports are set to start, but since the export markets are also disrupted because of the coronavirus and are all at different stages of disruption, this can become difficult.

Germany: Strawberry market in balance
Despite the slightly depressed mood because of the coronavirus, the German strawberry season is in full swing. The domestic production has been on the market for several weeks, competing against Dutch strawberries. The Easter weekend again caused a noteworthy sales peak this year. Despite alarming reports of a picker shortage and exponential price hikes, strawberry prices are at the same level as last year, reports a trader from Düsseldorf.

Despite the steady development of protected cultivation in Germany, open ground strawberries still dominate the market. "We still rely on the Netherlands and Belgium for greenhouse and tunnel strawberries," said a trader. In terms of varieties, the focus is almost exclusively on the Elsanta and Sonsation. For the time being, the idea of German-grown strawberries eventually being available all year round seems unthinkable. This is partly due to the high (unsubsidised) energy costs in Germany, which are often five times as expensive as in the Netherlands. This ensures that new cultivation concepts, such as illuminated cultivation, are hardly profitable.

Despite their great popularity, strawberries are a relatively cheap product, making higher production costs difficult to pass on to the retail price, says a grower. For that reason, people are cautious about seasonal extensions. "Traders still prefer cheaper imported strawberries."

France: Sudden turnaround in the domestic market
The strawberry market has suffered due to the coronavirus. Consumers were not interested in the fruit and preferred basic fruit and vegetables with a longer shelf life. That situation changed quite suddenly and the demand for French strawberries exceeded the supply, which led to higher prices. The reason for this sharp U-turn in the market was the appeal of the French government to consume more French products and a reduction of imports of foreign strawberries. Spanish imports in particular fell sharply due to a shortage of labor in that country.

Spain: Fear of declining acreage in the future
The collapse of strawberry prices due to the measures taken against the coronavirus, especially in recent days, have motivated some growers in Huelva to leave the remaining strawberries unharvested, and that with a month and a half of the season still to go.

Although this year's volume has been lower due to the weather conditions (more rain and lower temperatures than normal), the supply is greater than the demand. Given the current prices, it is feared that the acreage may be reduced in the future. Despite the situation, the companies continue to pick and pack in order to stimulate producers for the new season. The change of consumer buying patterns due to the lockdown and the loss of the catering industry have caused a decline in the demand for strawberries. After all, consumers prefer fruit that has a longer shelf life in order to reduce the number of visits to the supermarket. There is also a shortage of laborers that people are trying to tackle by hiring workers from sectors where they are currently unemployed. However, most of these people will drop out after just a few days because they are not specialized in those jobs and have no experience in them.

Italy: The season has started in the north
Basilicata, a region with 830 hectares of strawberry crops, has now harvested 60% of this year's expected total volume. The season will continue until the first days of June. The prices of Italian strawberries oscillate between 2.50 and 3.50 € / kg. Over the past week, the demand has mostly risen in the markets of North-Central Italy. In Campania, the volume has been reduced. The demand is currently also higher than the supply, which means higher prices. This rise in the demand is the result of the summer weather.

In Northern Italy, the strawberries grown in tunnels have already started to be picked. These are varieties with a high sugar content. The prices are good, but around Easter, many customers complained that they were too high. With cultivation under tunnels and hydroponics in greenhouses, some strawberry growers are able to supply the market with Italian strawberries for 7 months.

Turkey: Growing demand from Russia
Turkish strawberries are currently benefiting from some harvest difficulties in neighboring Greece and the growing demand for strawberries on the Russian and Belarusian markets. A Turkish grower sees opportunities for his strawberries, as there is nothing wrong with the volumes. However, there are some challenges for Turkish strawberries when it comes to their harvest and transportation. "Strawberries must be picked, packed and shipped in the same day," says the grower. "If something goes wrong at any step, things will go awry. Also, you cannot have any delays in the transport, since it is a very sensitive product.” The grower mainly ships his products to the Eastern European market.

China: High volumes, but little demand
Strawberry sales in the Chinese market have been moderate over the past few months. The season had a good start in January, when strawberries were in high demand due to the Chinese New Year. During this time, strawberries always do well and are usually sold in beautiful packaging. The busiest period for the harvest is always January to March. This year, the weather was very favorable for the fruit, so in most cases, the yield was higher than last year.

However, sales went downhill in mid-February as the coronavirus spread further in China. It became much more difficult to ship the strawberries and find enough workers to pick them. As a result, a large part of the harvest was lost, because strawberries have a short shelf life and could often either not be transported after harvesting, or were not harvested at all. After everything was back under control, traders were able to recover quickly with new supplies of fresh strawberries. However, the demand lagged, causing the price for strawberries to fall below last year's.

Mexico: Despite labor shortages, no early end of the season
The Mexican strawberry season is almost over. The Baja variety will still be available until the second week of May. Most exports take place between October and March, while most of the production in April and May is intended for the domestic market. Although exports go to 38 different countries, 97% of the total ends up in the US and Canada. This season, the coronavirus has caused significant fluctuations in the price and also in exports. However, the season did not end prematurely due to labor shortages, which are now being reported.

United States: Imminent overproduction
The strawberries on the North American market currently come mainly from California, which is practically the only supplier at the moment. The volumes are abundant, according to some growers and traders. They fear an overproduction in the coming weeks, not only because of the warm California weather that could lead to the volumes doubling around Salinas / Watsonville and Santa Maria, but also because of the loss of the food service. Strawberry batches from Oxnard are already partially shipped to the processing industry in order to help maintain the balance between supply and demand. Through promotional campaigns in the US, the industry is trying to promote the sale of strawberries in the retail and that is going well. The supply and demand are currently in balance and prices are therefore stable. Growers are looking forward to the start of the cherry season in California. These could cause the demand for strawberries to fall, especially given that the export opportunities this year are limited by the coronavirus. This means that more cherries will end up in the domestic market. But before that, Mother's Day is just around the corner. In the US, this is an important celebration that traditionally gives a boost to strawberry sales.

Australia: Start of the season in Queensland
The strawberry season has started in the north of the country, in Queensland, which has growers who will stay in the market until October. Australia is a country with a year-round production of strawberries from its various regions. The total volume fell by 18% in the 2018-2019 season compared to the previous one, down to 76,604 tons. The value fell by 12%, down to AUD 392.4 million (EUR 236.2 million). Only a small part is exported (3,685 tons). 88% of the strawberries are intended for the fresh market; of this, 85% is absorbed by the retail and the other 15% by the food service.