US (NJ): "Ethnic crops present new opportunities for growers in NJ and Mid-Atlantic"

Ethnic (or Exotic) crops present new opportunities for growers, produce marketers and consumers in New Jersey (NJ) and the Mid-Atlantic. The rapidly changing demographics compels a new look at the crop content of the region with a focus on responding to crop preferences of rising ethnic nationalities in the region. This article highlights current efforts at Rutgers University on promoting exotic peppers, tropical spinach (amaranths), okra, roselle and tigernuts as additions to the bread basket of NJ and the mid-Atlantic communities to fulfill our land grant responsibilities.

Why exotic crops research and development at Rutgers?
We are a Land Grant University with responsibility to respond to community needs in Production Agriculture and Food. Demographic changes in recent decades compel us to respond to the shifting population and associated cultural preferences for food crops. New Jersey environment will support the production of many of the ethnic crops in the diet of the major ethnic groups that are increasing in population in our state and region. If we can produce the crops here, we can enhance food security in our state and region, and add significant value to our economy.

Our exotic crop research focus at Rutgers University
In 2001 we formed an Ethnic Crop Research Group, with Dr. Ramu Govindasamy, Professor of Ag & Food Resource Economics, as Leader. Our team reached out to ethnic crop research scientists at the University of Massachusetts (U-Mass), MA and University of Florida (UFL), FL to form an East Coast United States Consortium. Between 2002 and 2013, the Consortium wrote research proposals and received >$2 million grant money from USDA to analyze and characterize the Ethnic Crop industry on East Coast United States. The Consortium focused on four major ethnic groups: Chinese, Asian Indians, Mexicans, Puerto Ricans. Our work identified the major ethnic crops preferred by each of the ethnic groups considered and selected the top 10 crops for each group based on crop quantity purchased per family from ethnic markets on East Coast United States. We are now investigating the production potential of some of the ethnic crops identified in our study in New Jersey and East Coast United States. 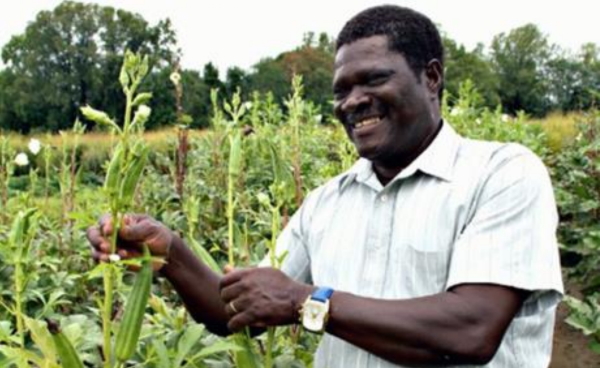 Exotic peppers
Exotic peppers (Capsicum spp.) are common in the diets of all ethnic cultures that increasingly inhabit NJ and the Mid-Atlantic. Since 2009, I have worked (and continue to work) with Dr. Tom Orton (Vegetable Breeder) and later with Dr. Jim Simon (Natural Plant Product specialist) to develop exotic peppers (Capsicum annuum, C. chinense, and C. frutescens) for the fresh and processing markets. Starting in 2010 with 45 pepper selections, we conducted field and greenhouse experiments across the state in NJAES research stations at Rutgers Ag Research and Extension Center (RAREC) in Upper Deerfield, Horticultural Research Farm III in New Brunswick; and the Snyder Farm in Pittstown to confirm the adaptation of the pepper selections in our germplasm repository. Since 2010 we have selected for those that can be grown successfully in New Jersey and in April 2017 we released to the public the Rutgers Pumpkin Habanero (R-PMK), a mild (<50,000 SHU) flavorful habanero with no heat in the flesh, tangerine taste and attractive miniature pumpkin shape (Figure 1).

Color varies from yellow to orange and red. Rutgers Pumpkin Habanero is a natural cross between the African and Mexican habaneros in our germplasm. Other habanero and other pepper types are in the pipeline for release in the coming years.

Okra
Okra (Abelmoschus spp.) is a vegetable crop of African and Asian cultures. At Rutgers, we have conducted field and greenhouse studies on the African and Asian selections since 2011.The African okra (A. caillei) produces red stem and short bulky red fruit while the Asian okra (A. esculentus) produces green stem and long slim green fruit. In our studies, a natural cross between the two has produced a third okra type that combines the red color of the African type with the long slim fruit of the Asian type (Figure 2). The third okra type is temporarily named the “American”okra. The “American”okra has variegated (red/green) stem and long slim red/green fruit; it grows taller than the African and Asian okra, and flowers 3-5 days earlier. Yield is comparable to the African and Asian okra but the variegated (red/green) color adds a special value to the plant. A fourth okra the Lady’s finger (A. esculentus), was added to our germplasm in 2018. It is distinguished from the Asian green by a deeper green color, longer and slimmer fruit with fewer ridges (4-6 vs.7-9 in Asian green and a wider inter-ridge space. Work is in progress on the phytochemical profile of the four okra types. 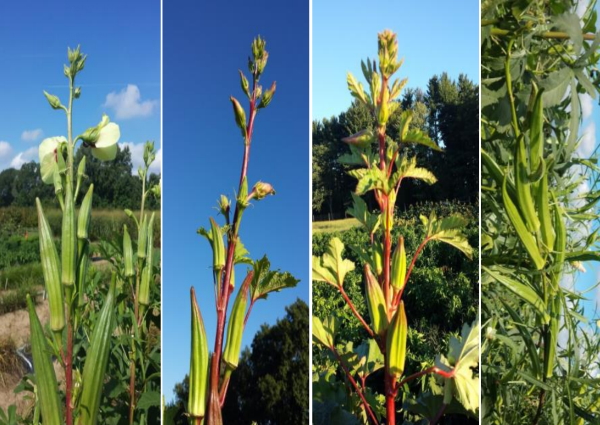 Roselle
Roselle (Hibiscus sabdariffa),also popularly known as sour-sour or sorrel, is a major ethnic vegetable associated with African, Asian and Caribbean cultures and culinary. The Asians eat the leaf as spinach while Africans and the Caribbeans use the calyx and flowers in various preparations including beverage, tea and other traditional uses. Germany is a key importer of the dried flower and calyx from Thailand, China and the Sudan. Some southern states in the US have started importing roselle flower and calyx for herbal tea. We started studying roselle at Rutgers in 2010. We began with five selections and currently focus on three that have significant market opportunities in NJ, namely: the Indian Red/Red (IRR), Indian Red/Variegated (IRV) and the African Green (AG) (Figure 3). Leafy green from the three selections is in high demand in Indian groceries. Our economic analyses so far shows that roselle can be a profitable crop to grow in NJ for the leaf. The roselle selections we currently work with are short day cultivars and cannot complete their life cycle in the field before the frost in October/November. However, these cultivars flower in the greenhouse in September and produce fully mature fruit by early to mid-December. We recommend this crop to our growers. They are easy to grow, require minimal management attention and are high yielding. Demand for the leaf is growing in the Asian communities. 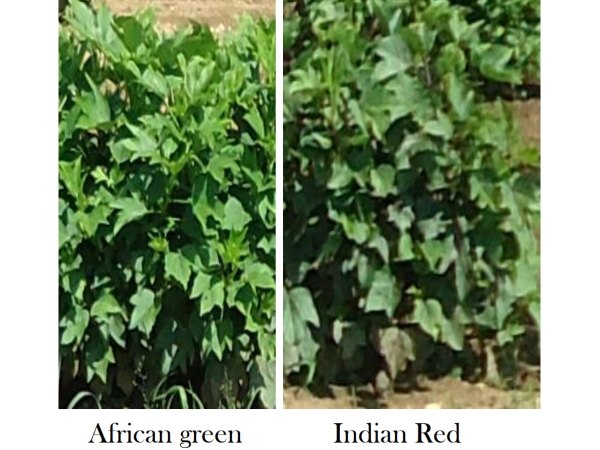 Tropical spinach (or Amaranths)
Tropical spinach (or Vegetable amaranth) (Amaranthus spp.) belongs to the same family of plants commonly known in the United States as pigweed---a dreaded weed of field and vegetable crops. This vegetable crop is common throughout the tropical world spanning the African, American and Asian continents. At Rutgers University, in addition to responding to demographic necessities, we are interested in integrating tropical spinach into our vegetable stream, primarily as a filler for the “temperate” spinach during the warm months of the year when the latter is off-season and very expensive in the market. Tropical spinach thrives during the warm months of the year, it is used the same way as “temperate” spinach and the two vegetables complement each other reasonably well in their nutrient profiles. In our research, which started in 2005, we have identified a few selections with high capacity for leaf and grain production (Figure 4). Several ethnic grocery stores in New Brunswick will buy tropical spinach for retail sale to their customers. Tropical spinach iseasy to grow. Insect damage may be a major challenge under some environmental conditions, but the common insect problems may be controlled using common IPM strategies along with some organic and/or synthetic insecticides as and when necessary.

Figure 4: Red Leaf Tropical spinach in the field (left) and in the greenhouse (right) Photos by Albert Ayeni

Tigernuts or Chufa
Tigernuts (Cyperus esculentus var. sativus), also popularly known as chuffa, is little known in the United States but much better known in Africa and more recently Spain. Tigernut is a close relative of yellow nutsedge, one of our most difficult weeds to control in field and vegetable crops in northeastern United States. Unlike the weedy yellow nutsedge, tigernuts produces edible underground tubers with delicious chewy taste and high-energy content. The tuber is gluten free and produces an oil quality of the same grade as olive oil. At Rutgers University, we have been studying tigernuts since 2006 primarily to understand the growth habit and the production potential under NJ conditions. Tigernuts grows well under NJ conditions but has no tolerance for freezing temperature. Repeated cultivation in our research farms has shown that it has no capacity to survive the winter months and therefore poses no threat to the ecological balance of our cropping systems, especially where the weedy yellow nutsedge may be prevalent. From nine tigernut selections we have evaluated so far, three are being investigated, out of which one will be identified as the “Rutgers Golden Tuber” in for release to the public.

Conclusions
Since 2001, our Ethnic Crop Research team at Rutgers University in collaboration with colleagues at the UFL and the U-Mass has advanced the knowledge of exotic crops on East Coast United States. We are at a point where we can safely identify some of the key ethnic crops with significant economic prospects for enhancing our Agricultural economy as we respond to the needs of our dynamic and fast changing communities. In my research, I have focused on the agronomy of some of these ethnic crops and the market opportunities. So far, I have determined that many of these crops maybe grown successfully in NJ and the market is substantial for growers to explore. It is our desire to share information with growers, marketers and consumers on our experiences and how we may work together to add value to our food security through sustainable production of those ethnic crops our communities need to support a strong and healthy workforce.

Acknowledgements
The support given to our work on ethnic crops in the past two decades by Rutgers SEBS/NJAES Administration and the USDA-IR4 Project is acknowledged with deep gratitude.