In this time of solitude and lockdowns, a solar-powered vegetable and fruit vending van designed by the Indian Institute of Horticultural Research (IIHR) has come in handy for them to buy fresh vegetables near their houses in a few districts where such vans are deployed by the Horticulture Department.

In the back it has a LED TV for displaying the prices of produce. The TV can also be used for disseminating social messages and crucial information to farmers on horticulture, Dr. Kumaran points out. An audio system too has been fitted to provide for announcements. An electronic weighing machine with computerised billing facility too has been provided. 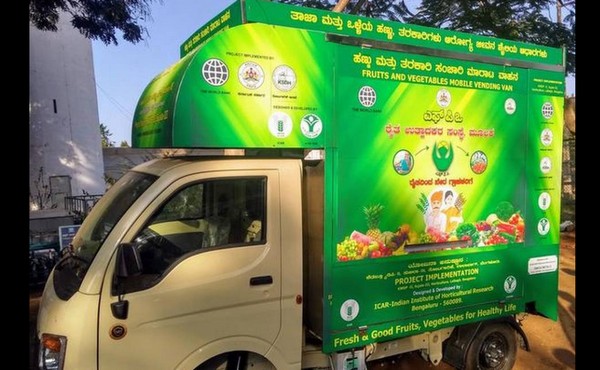 “Except for running the vehicle, all other systems on the vehicle such as its cooling chamber, TV and audio announcement system are operated by solar power. It also has a battery that can be charged for emergency usage. It is also GPS-enabled so that its whereabouts can be tracked,” the scientist said. So far, the IIHR has developed 20 such vans for operating in 10 districts.

Two such vans were pressed into service in Vijayapura about 10 days ago. Santhosh Inamdar, Deputy Director of Horticulture for Vijayapura, says the new system evoked good response with all the produce being bought up within a few hours on the first day itself. “We had to fill up each van twice with vegetables in a day following huge demand,” he told thehindu.com