The building of indoor farm Planet Farms is in progress: 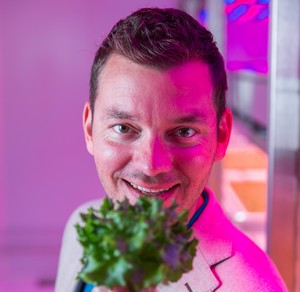 Along the road from Milan to Venice, a large building is being built. It's an indoor farm. According to Roel Janssen with Signify, this is going to be the most beautiful indoor farm in the world. Planet Farms is it's name. The building consists from concrete and wood, and 'hangs' from the construction. A prominent Italian architect designed and drew it. Inside and outside, it is going to be 'impressively beautiful'. 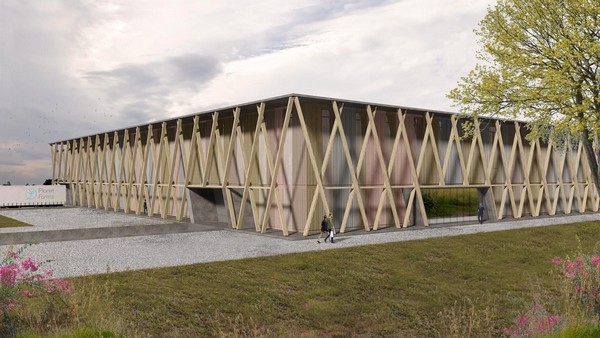 The facility will be fully automated. The only and first person to touch the crop, will be the consumer. The sowing, packing, weighing, moving, palletizing... no human hand is needed. The transporter takes it to Milan or Venice. The retailer puts it in the shelves. And the consumer is the one opening the package, at home.

The build is now at hold, due to Corona. Roel does not expect this stop to be long: "It's well arranged. Planet Farms is a textbook example. It's a success story.

Two friends started a research centre for indoor farming. Every layer has its own light recipe, with dynamically adjustable luminaires. Per layer, there's two zones. The results were good, that's why the complex is expanded to a hectare.

The farm is close to Milan. The demand for these products is enormous. Roel says that right in this situation, they could sell the products four times in the city. The need for this product is very high in this crazy situation.

Basil
In Planet Farms' research center, a lot of trials have been done with babyleaves and herbs. And lots of basil. Basil plays a big part in the Italian kitchen. Signify did lots of trials with basil in GrowWise in the Netherlands already, but not for the Italians. "Basil in Italy is not comparable to the basil we know here in the Netherlands", says Roel.

"The way we buy it in the Netherlands, like in a little pot or cut in a sachet, you don't see that in Italy. To begin with, for Italians there's different varieties. The cultivation is different. The Italian market asks for a different stem thickness, leaf size, and with that a different flavour. It's unique. Flavour is leading in Italy, without losing sight of production. The focus is on the taste contents of the basil."

This form of cultivation was, for that same reason, something to adjust to for Italians, who started learning about indoor farming. The image of the Italian kitchen is the same we know in the Netherlands: the craft of the cultivation. "We can say all kinds of things about an indoor farm, but it's not a craft cultivation. The taste is better, though. En as I said, that's leading. The taste is better because the crop is packed immediately, the sales cirkel is short, and with the light recipes you can alter the taste as well."

Spot the differences
Roel: "In Europe, we always said: only build an indoor farm if there's no other option. Otherwise, build a greenhouse. Because in terms of finances, that's usually the best. If there's a limitation, build an indoor farm. An indoor farm is a good solution for extreme climates, lack of space or lack of cultivation knowledge. And if you don't have a good grower, better not start at all.

With the right technology around the plant, it will be fine. You need less cultivation experience than in a greenhouse. Without the outside influences, it's easier to control and manage.

At first, Signify thought that the Middle East would be the main indoor farming area. It's rich and it has climate extremes. It is growing there. But America really is the worlds number 1. A lot of money is available for indoor farming there. There's over 30 start-ups there now. America does it right: they think from entrepreneurial drive. The marketing is good. The own brands are on the shelves. In the cut lettuce shelve, there's a lot of brands. Every brand has its own story and that's why they can differentiate very well.

Europe looks at indoor farming with a 'horticulture hat'. Dutch people think from the plants point of view. What does it need to produce good and many? That's the central question.

Roel: "In Asia, people have more of a 'technical hat'. Asians tend to automise everything they can. In Japan, for instance, there's way more layers in the indoor farm. That does not necessarily mean that more kilo's are harvested. On the contrary, it's harvester younger, the plant is smaller and more vulnerable." 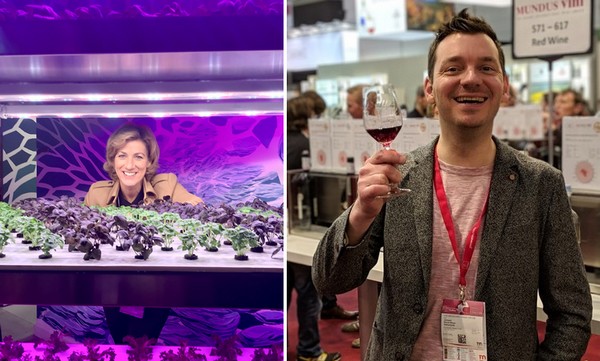 Left: Ellis, on the right Roel hinting at his new career move

Goodbye Roel Janssen
After 13 years at Signify, Roel Janssen is saying goodbye. He is going to work as business developer at a large winery. A nice opportunity came by. He is not leaving without hurt: "It's such a good time in the field of indoor farming. It's going to happen in the next years. And when Planet Farms opens (end of 2020 / start 2021), I want to be at the opening. This is to cool to miss." Roels successor is Ellis Janssen - van Boxtel. Ellis is going to lead the indoor farm team at Signify. That's now up to 10 - 30 people.