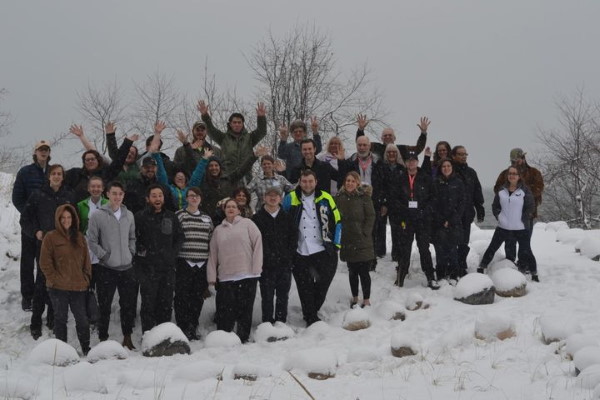 Why do people organize food summits?
Food summits can be big  -- the World Food Summit was held in Rome in 1996 by the Food and Agriculture Organization of the United Nations, which was the occasion for an international declaration about the importance of food security -- or small, like the Upper Peninsula Food Exchange (UPFE) Food Summits that will be profiled in this series, which attracted people from a few counties to talk about what they want to address in their local food system in the next five years. A state-wide Good Food Summit has been held every other year since 2010 aligned with the principles of the Michigan Good Food Charter in order to share information about good food initiatives, legislation, and emergent issues for Michigan. Kathryn Colasanti worked to organize the first Good Food Summit, and says that the word summit “fit well with our idea of bringing together wide representation and collectively establishing a vision for the food system in Michigan.”

While a food summit may be specific to a certain city, county, or economic development district, others bring together participants from a much larger geographic region to focus on specific issues and education shared by their communities and governments. Two such examples are the national Food Sovereignty Summit hosted by Oneida Nation of Wisconsin and the Great Lakes Intertribal Food Summit hosted by various tribal communities on a rotating basis:

It may be useful to facilitate progress in the food system by focusing efforts on a specific sector. If the local school board is avid about having a high quality lunch program, introducing a targeted Farm to School effort could be appealing and have high impact. However, there is also power in bringing together all food system stakeholders in a broader context. Inequities found within one area of the food system are a function of broader system failure. Working together at this level mobilizes the broad stakeholders required in system change.

Local food policy councils are a way to keep connections among local food stakeholders strong -- and councils can form before or in response to a Food Summit. The Western Upper Peninsula Food Systems Council began as a network of people who wanted to organize around local food issues: “through friendships, sharing meals together, and lively dialogue, we started to weave and bind our commonalities together. The Western UP Food Systems Council is the result of sharing our food resiliency dreams, desires for equity and justice, and ultimately, a commitment to be in the service of our communities.” Food policy councils can find one another, and support to form or grow, through the Michigan Local Food Council Network, which “formed in 2015 in response to food councils’ need for statewide peer-to-peer learning, capacity building, and networking” and has an interactive map of good food infrastructure in Michigan.