On Wednesday, 26 February, the first Kwanza raspberries were auctioned at Veiling Zaltbommel in the Netherlands. Zachtfruitkwekerij Simons BV supplied this first top-of-the-range box of fruit. Grower, Rene Simons, innovatively cultivates Kwanza. He does so at his soft fruit nursery in the Dutch town of Schijndel. Rene uses LED and assimilation lighting. This modern farming method's goal is to supply top-quality, Dutch-grown Kwanza raspberries year-round. 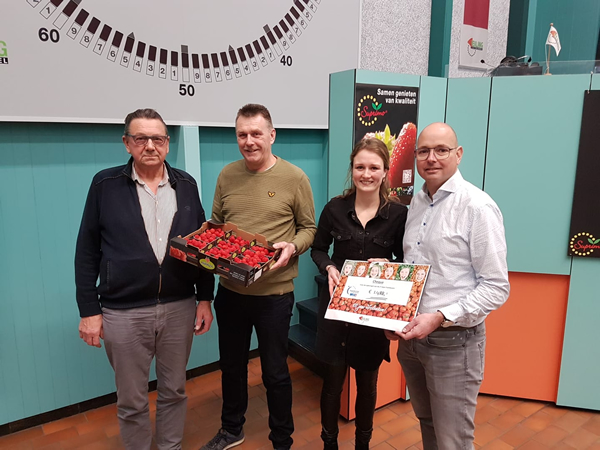 Jos van Vugt AGF, a greengrocer from Vlijmen in the Netherlands, bought these Kwanza raspberries. This was done via a broker, Arie van Vugt. He paid a premier price of €62 per 125g punnet. Arie van Vugt was 15 when he started buying in fruit and vegetables. Back then, that made him the youngest buyer of his kind. In May 2020, Arie will be in the business for 60 years.

The amount paid was doubled by Veiling Zaltbommel, bringing the total to €1,488. Veiling Zaltbommel and Zachtfruitkwekerij Simons BV donated this money to the SamenLoop voor Hoop Bommelerwaard. This charity's treasurer, Leon Verlouw, received the money.

SamenLoop voor Hoop Bommelerwaard is an event for anyone who wants to help fight cancer in some way. It will take place on 6 and 7 June 2020. The focus will be on cancer during this 24-hour walking relay race. This will be held around the Ammersoyen Castle in the Netherlands.

Life will also be celebrated. There will be ceremonies, a welcoming fair, and other activities too. All this will ensure an unforgettable event for visitors as well as participants. The event is being organized in various places throughout the Netherlands.

The Kwanza season has now started. It will probably run to the end of the year. Veiling Zaltbommel does not only sell this raspberry variety. This company has a total Dutch-grown product package. Kwanza holds a prominent position among the soft fruit. This fruit is a market leader in the Dutch raspberry sector.