How lettuce plants could help fight a deadly disease

In pulmonary arterial hypertension (PAH), high blood pressure in the lungs’ arteries causes the heart to work extra hard to pump blood to the lungs and around the rest of the body. The condition is rare but deadly, and current treatments are expensive and have side effects and inconvenient modes of delivery. There is no cure.

With a goal of developing a more effective, convenient, and affordable therapy, research led by Henry Daniell of Penn’s School of Dental Medicine produced a protein drug in lettuce leaves to treat PAH. He worked with other scientists, including Steven M. Kawut of Penn’s Perelman School of Medicine; Tim Lahm from the Indiana University School of Medicine; Maria Arolfo and Hanna Ng of the Stanford Research Institute, on toxicology and pharmacokinetic studies; and Cindy McClintock and Diana Severynse-Stevens of RTI International, on regulatory studies.

The protein drug, composed of the enzyme angiotensin converting enzyme-2 (ACE2) and its protein product angiotensin (1-7), can be taken orally and, in an animal model of PAH, reduced pulmonary artery pressure and remodeling. In addition, rigorous toxicology and dose-response studies suggested the drug’s safety in animals. Further work will be necessary to develop this novel treatment approach for patients with PAH. The team’s findings appear in the March issue of the journal Biomaterials.

“We completed extensive investigations to highly express these proteins in lettuce plants and to ensure the product is safe and effective,” says Daniell. “We’re ready to progress with further work to move this to the clinic.”

Daniell has employed his innovative platform to grow biomedically important proteins of many kinds in the leaves of plants. The system works by physically bombarding plant tissue with the genes of interest, prompting chloroplasts into taking up genes and then stably expressing that protein. Propagating those plants then creates a kind of pharmaceutical farm from which the researchers can harvest, dry, and process the leaves, resulting in a powder that can be placed in a capsule or suspended in a liquid for use as an oral medication.

A 2014 publication in the journal Hypertension, on which the current study was based, earned Daniell a prize from the American Heart Association, and support from the National Institutes of Health through its Science Moving TowArds Research Translation and Therapy (SMARTT) program, which aims to efficiently translate promising basic science discoveries into therapies that can make a difference in people’s lives.

That earlier publication had shown that ACE2 and angiotensin (1-7) could be expressed in tobacco leaves and, when fed to rats with a condition that models pulmonary arterial hypertension, could significantly reduce the animals’ pulmonary artery pressure while also improving cardiac function. 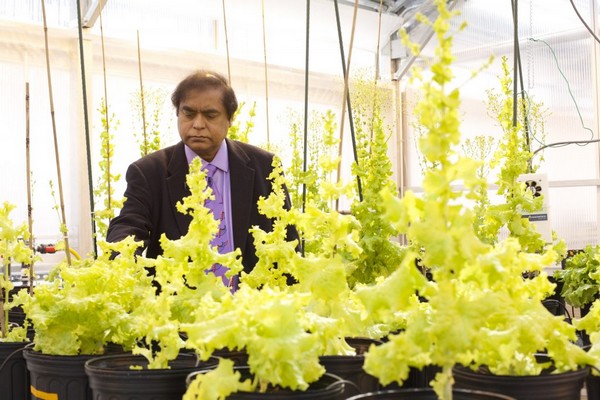 To create a drug that humans could safely ingest, however, required moving from a tobacco to a lettuce-based platform. The new work takes advantage of other advancements the Daniell lab has made during the last several years. He and colleagues have successfully devised methods to enhance expression of human genes in the plants and to remove the antibiotic resistance gene that is used to select for angiotensin-producing plants. They’ve also worked with a partner to produce genetically engineered plants in a production facility that adheres to FDA standards.

In the current work, the researchers demonstrated that they could accurately evaluate the dose of the ACE2 and angiotensin (1-7) proteins in lettuce, and that the products could be dried and kept shelf stable for as long as two years.

Funding from the SMARTT program enabled animal studies evaluating toxicology, pharmacodynamic, and pharmacokinetic studies, which evaluate the safety of the drug, where it goes in the body, and how long it persists in the body at different doses, in work done at Stanford University.

And to confirm that the lettuce formulation of the product had a positive impact on experimental PAH, the team fed rats a solution containing the drug for four weeks. Their lung pressures went down 30-50%, and the structure of their arteries also improved.

“This is an innovative approach to targeting the renin-angiotensin-aldosterone system in pulmonary arterial hypertension,” says Penn Medicine’s Kawut, “which may hold promise in this and other diseases.”

“We are very excited about this work that shows efficacy of bioencapsulated ACE2 and angiotensin (1-7) in our animal model of pulmonary arterial hypertension,” says Indiana University’s Lahm. “We now need to confirm that the intervention also works in other animal models and when given later in the disease. Ultimately, our goal is to move this to the clinic for trials in patients, but we need to make sure we learn as much as possible from animal studies and from studies in healthy human subjects to make sure this intervention is safe and efficacious in patients.”

In other future work, Daniell hopes to continue evaluating the effects of ACE2 and angiotensin (1-7) in treating different types of cardiovascular disease, such as heart failure.

“There are some potentially broad applications of this drug that we’re hoping to investigate,” says Daniell.