Only tomatoes produced without fossil fuels at Migros

Migros intends to purchase only vegetables from fossil-free heated greenhouses in Switzerland in the future. That is why the vegetable growers are eagerly looking for alternative energy sources for their greenhouse heating systems. 2018 was the warmest year in Switzerland since weather data has been recorded. It was not a slip-up, but is part of the temperature development that has been continuously observed over the last 150 years. Physicist Christoph Raible from the Oeschger Centre for Climate Research (OCCR) at the University of Bern used 21 simulations to calculate a model of how the climate will develop in the coming decades if no climate protection measures are taken. The average temperature would rise by two degrees by the middle of the century.

Almost more important, however, were the precipitation events to be expected, said the climate researcher in his presentation at a greenhouse vegetable growing conference in Posieux. Here, too, he said, the available data from the last decades speak for themselves: "All weather stations show a clear increase in extreme precipitation". In the future scenario, weather extremes such as heavy precipitation, heat days or the number of consecutive dry days will increase significantly. Even if the climate targets of Paris were to be achieved with the calculated temperature increase of "only" 1.5 degrees, this would have consequences for agriculture. But at least only in a mitigated form, as the climate researcher said. Therefore, climate protection measures such as the reduction of CO2 emissions would be worthwhile, he said. 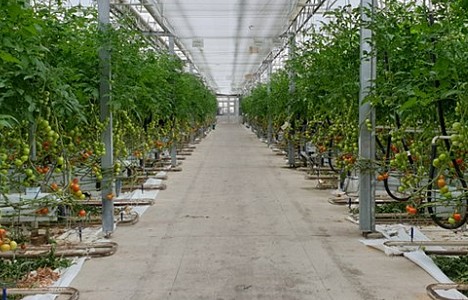 Peak load as crux of the matter
The major retailer Migros broke the first ground at the beginning of 2019 when it announced that from 2025 it would only buy Swiss vegetables and fruit from fossil-free heated greenhouses. Since then, the Swiss greenhouse industry has been busily searching for CO2-neutral alternatives to gas and oil heating. For example, it would be relatively easy to cover the heat requirement for a base load with wood. The crux of the story, however, is covering the peak load, i.e. the energy that is only required in very large quantities for a short period of time. For example, when it suddenly gets very cold outside. These "last" percentages are expensive. With wood, a base load of between 75 and 90 percent can be covered, said energy expert Martin Steiger of DM Energieberatung AG. The amount depends on the size of storage facilities.

High investment costs
The base load that could be covered by a groundwater heat pump is considerably lower. However, the investment costs are much higher in both cases compared to the previous fossil heating systems. Steiger spoke with a greenhouse size of four hectares of additionally converted 2 million euro for a wood or 1.6 million euro with a heat pump solution. And this with a coverage of "only" 80 percent fossil-free base load. With 100 percent coverage with wood energy alone, the additional costs for providing the peak load would be exorbitantly high - the heat production costs would double from 10 to 20 centimes per kilowatt hour. "That would be economically nonsense", as Steiger put it.

So how could the peak load still be reasonably covered? With biogas, for example, which is expensive. There must also be a connection. Importing makes no sense because this cannot be counted as CO2-neutral in Switzerland. "Bio fuel oil" FAME (Fatty-Acid-Methyl-Ester) would be another option and could be burned in the existing oil boiler. However, this solution is also relatively expensive and the majority would have to be imported.

Another option would be the use of district heating, provided that there is a connection to a nearby pipeline. Some greenhouses in Switzerland already obtain heat from waste incineration plants, for example, which are also considered CO2-neutral. However, there is uncertainty here too, because nobody knows whether this energy will continue to be considered CO2-neutral in the future.

Hardly any geothermal energy
The already relatively widespread use of geothermal energy in Dutch greenhouses is not yet a serious issue in the Swiss vegetable sector. The Grob family has been experimenting with heat from a 1500-metre-deep hole on their vegetable farm in Schlattingen for almost ten years. But since then, there have been setbacks. It remains to be seen whether the Grobs' greenhouses can at some point be heated with the heat from the depth. The subsoil in Switzerland is too heterogeneous and also not mapped, which is why the financial risks for drilling are very high, said geothermal energy expert Karl-Heinz Schädle in Posieux. In the short term, he sees at best a chance in near-surface geothermal energy with geothermal probe fields for the seasonal storage of heat to cover the base load.

Not too high temperatures
Organic vegetable grower Stefan Müller from Steinmaur has been using a wood heating system with underfeed combustion in his greenhouse for 15 years. This means that the wood is pushed into the fire trough from below with a screw conveyor. This requires a good quality of wood, he said in his experience report to the 70 or so participants who had registered. Müller is currently burning wood chips from a neighboring carpentry shop, 65 to 70 percent of which is dried. "Drier wood otherwise leads to overheating and damages the fireclay bricks, which then have to be repaired at great expense," he explained. The 100,000-liter heat storage tank helps him to permanently ensure a high proportion of the heat requirement. But he also has an oil heating system as a safeguard when it snows or when the temperatures outside drop sharply. He pointed out to potential newcomers that the procurement of the raw material is becoming increasingly difficult because the interest in wood for heating is growing. He advised long-term supply contracts, which ultimately also offered a certain degree of planning security in terms of costs.

Wood combined with natural gas would be optimal
Jeremy Rolle from the University of Applied Sciences of Western Switzerland in Fribourg presented the Innoserre project, which has been investigating innovative and climate-friendly solutions for the energy supply of greenhouse plants since 2017. Various combinations with wood, natural gas and biogas were compared. CO2 fertilization in the greenhouse plays a central role in this project. Conventional gas heating systems have solved this problem in a relatively elegant way, using the CO2 produced by the combustion of natural gas in the greenhouse as a fertilizer; with biogas, the proportion is much lower. With wood heating systems, heat pumps or district heating it is completely absent and has to be purchased expensively as industrial CO2.

In a comparison using a case study, the combination of wood and natural gas scored best when greenhouse gas reduction and costs were considered simultaneously. If only the criterion of greenhouse gas reduction is considered, the solution with industrial CO2 would be outstanding. Incidentally, this is not counted as climate-impacting CO2 in the life cycle assessment, because it is captured in an industrial process, where it is prevented from entering the environment. However, this process would also significantly increase the production costs for tomatoes, for example. He wondered whether the customers would pay this extra price, Rolle said justifiably.

Heat network in Seeland
If all goes well, several vegetable farms in the greenhouse zone in Ried near Kerzers should be able to obtain heat from 2021 onwards via a pipeline of a new heat network. The construction project for the Ried-Kerzers-Fräschels heat network consists of a heating system with two wood-fired boilers with a total output of 4800 kW to cover the base load and a 2500 kW gas boiler. In addition, there are already existing storage capacities in the greenhouses of 1800 m3. Besides the greenhouses, other residential and industrial buildings in the region will also be connected to the grid.

With the capacity this will allow, it is therefore conceivable that the greenhouses could possibly be supplied with wood energy even during peak loads. Incidentally, the procurement of the wood is no problem, said Daniel Meier of DM Energieberatung AG, who is in charge of the project. Not only in the canton of Fribourg, but throughout Switzerland, more forest is still growing back than is harvested. In European comparison, Switzerland even has one of the highest wood reserves. The 6000 tons of CO2 saved annually by the heating network are equivalent to 1300 heated apartments, 620 hectares of reforested forest or - five fully occupied airplanes from Zurich to New York and back. The latter comparison gave some event participants food for thought, and they may have wondered whether such investments are really proportionate.