Getting off the plastic treadmill

Over the 16 years I have worked in horticulture there has been an ongoing discussion around plastics use, which has hugely intensified as public opinion has caught up with the science. Perhaps one of the starkest warnings of how bad the situation is, came with the announcement that 83% of drinking water samples from around the world now contains microplastics. It is now impossible to escape exposure, and I wonder whether plants irrigated with water containing microplastics will take in those plastics through their roots, thus creating another entry point into the food chain. 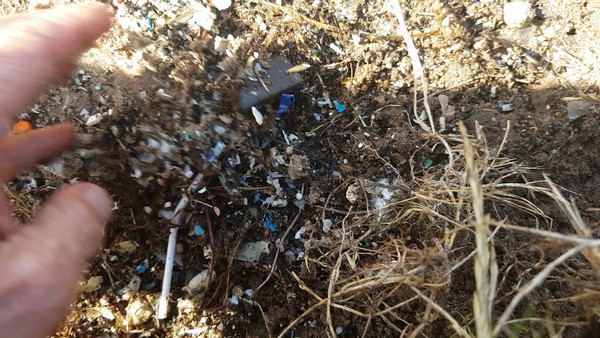 Horticulture offers a perfect example of how dependent we, as a society, have become on plastics. Our seeds often arrive in plastic packets, we sow them into plastic trays, with plastic  labels,  pot on into plastic pots, cover the ground in plastic to protect the soil and suppress weeds, grow under plastic in polytunnels, train our plants up plastic strings, harvest the produce into plastic boxes and then pack it into plastic bags. This makes it a daunting task to wean ourselves off plastic, especially as the alternatives are often more expensive and/or more time-consuming to initiate. But I believe that done well, an operation that is able to reduce its plastic use, especially on packaging products for sale, can potentially reap a substantial financial reward. One of our local milk suppliers has recently reintroduced re-useable glass bottles with a £1 deposit  and it has been very encouraging to see how many people have switched to glass despite the extra cost and inconvenience.

When running a fresh vegetable market stall in Glastonbury, I found it incredibly challenging to not put fresh leafy produce into plastic bags. Some dedicated customers would buy items such as chard in paper bags, but if they were not able to get them straight home and stored or eaten that day, they would often be wilted by the evening and find their way into the compost bin. This is of course the argument put forward by the plastics manufacturers, who point to the environmental cost of wasted produce. In the end, I resorted to using degradable and (when it became available) biodegradable plastic bags.

Degradable?
However, it now appears degradable plastics may be worse as they just break into microplastics in the environment. Biodegradable bags can often be made from GM ingredients and there is also the issue of using land that could be producing food, being used to grow the raw materials to produce the bags. I am also not always convinced that they are truly biodegradable, as sometimes they need to be composted at a high temperature. Our local authority removes all bags from the municipal compost collection and incinerates them to avoid any non-biodegradable bags ending  up in the compost. There is also some confusion in labelling; a few years ago I ordered 500 biodegradable bags online, but when they arrived, the bags were clearly labelled as ‘degradable plastic’. Another issue with some biodegradable bags is that  they breathe, which makes them little better than paper bags for keeping produce fresh. Some growers I know have decided that re-using plastic bags that customers have washed and returned is preferable, but you do have the challenge of food safety with produce that is to be consumed raw. However many times you reuse a plastic bag, it is still most likely destined for landfill once it has been used to exhaustion.

A possible solution for fresh produce packing would be for some form of deposit return system that mimics the reusable glass milk bottle model. Customers would buy items such as salad in reusable solid containers that could easily be washed and returned to the grower ready for re-use. Perhaps the easiest way to envisage this is with a box scheme where individuals receive the same boxes each week. There is no reason why it could not also work through more traditional means of retailing. There would be an associated cost in terms of time for the producer, but if well marketed it appears that customers will pay more and there could actually be an increase in sales as a result of switching to such a system.

Growers as consumers
As well as offering our customers opportunities to reduce their plastic, I believe it is important that we remember our role as consumers. Companies such as Tamar Organics have been selling most of their seed in paper packets with environmentally sensitive dyes etc. for years, and we can help them by choosing their seed over other companies who still use plastic packaging.

There are some areas of plastic use that are harder to address. Seed trays and pots are almost universally made out of plastic. Eliot Coleman sows into compost blocks, which as well as reducing reliance on plastic has the additional benefits of less root binding and so can be considerably faster to plant out. However, in my experience making the blocks is far more time consuming when compared to using module trays. For this reason, when I was running a market garden on my own, I nearly always opted for the module trays. I also experimented with biodegradable pots most of which were reusable after one season’s use. But around 5% broke when I was planting out and I also found they are more rigid than conventional plastic pots, which inhibited removing the plants ready for planting, thus adding more time to the job.

At Schumacher College, we have recently been grappling with microplastics in our compost. Until recently, many people were unaware of the plastics used in teabags – another example of how entrenched plastics have become in our everyday life. We get through a massive amount of teabags in the college and after much debate it was decided that we should  landfill  the  teabags  until the companies remove the plastics from the bags. As a life-long composter I find it very upsetting to see tea bags going in the bin, although it is also difficult to see plastic containing teabag skeletons littering our compost. We have boycotted teabags that come individually wrapped in plastic bags, and have been informed that Clipper have stopped adding plastic to their bags, so once their new bags come into stock we can add them to our compost once again.

Tunnel and crop covers
There are two areas, neither of which seem to offer very easy solutions, polytunnels and crop covers, but it is hard to imagine any kind of market garden operating in the UK climate without them. Whilst the plastic covering a polytunnel should last for a number of years, they will still invariably end up in landfill and a worse case example was seen in Spain where a whale was found to have died having swallowed plastic from a polytunnel. An ideal solution is a greenhouse, but very few market gardens can afford a greenhouse especially if the land holding is rented. Also, on a smaller scale I have noticed the anti-spot tape on tunnel frames degrades over time, adding more microplastics to the soil. 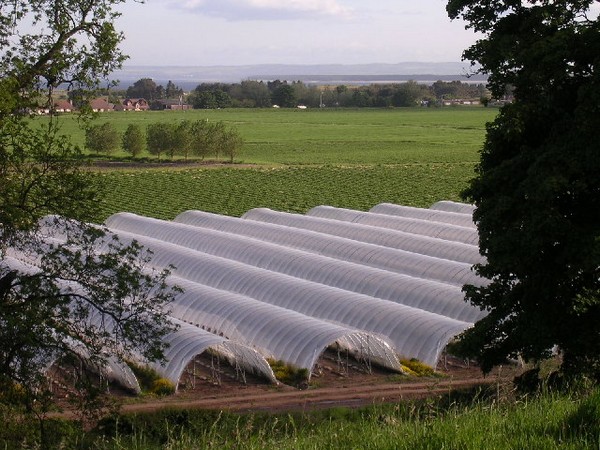 Within the tunnels, I have experimented with jute twine for training crops such as tomatoes, rather than the more commonly used baler twine. My preferred method for anchoring the string, is planting the crop over the base of the string. When I did use the jute twine, I found that the combination of wet at the base of the string and the weight of the plants broke the twine around August time. This meant I had to retie all my plants with baler twine, which was incredibly time consuming and I also suffered damage to the plants that fell. There has been a recent discussion on the Facebook UK Organic Market Gardeners’ Page (highly recommended), where triple ply jute twine was suggested and I hope to try this next year.

Crop covers again offer difficult choices. Black plastic offers an invaluable tool for market gardeners in weed suppression and clearing ground as does fleece at the extremes of the growing season. Plastic is also helpful in protecting bare soil when a crop or green manure cannot be sown. At Schumacher College we aim to cultivate as little as possible, a tactic aided by black plastic use. I have tried using biodegradable mulch in the past, but it   is very expensive, and can be quite fragile. It is unable to cope with established plants and weeds such as couch grass will go straight through it. It can work well when placed on bare ground and planted straight into. Some argue the extra cost of the mulch is more than compensated for by the reduced need for weeding and increased moisture conservation (although it is important to not cover dry ground – as crops may then suffer through lack of moisture). I don’t know of any alternatives to fleece, which we found invaluable this May with the late frosts.

We are currently experimenting with ramial wood chip for its associated soil benefits and as a weed suppressant. Our over- wintered onions and garlic did very well with a wood chip mulch that was added after they were planted and as a result, the weed burden has been minimal. Also, the soil underneath looks much better than it usually does when exposed to winter weather and subject to the minimal protection offered from onion foliage. With our spring sown onions, we planted some into previously mulched beds and others we mulched after planting. The onions that went into the ready mulched beds have suffered greatly as a result of slugs hiding in the mulch. Which of course is the ongoing issue with mulching in the UK! At this year’s Oxford Real Farming Conference we heard Johannes Storch talk about planting straight into uncultivated ground mulched with rye, and we plan to experiment with this technique in 2019 season but again, my fear is slugs.

There are no easy answers to the plastic issue in market gardening, but there are ideas and techniques being adopted. It can also be difficult to know which is the best route to follow. Do we try to reuse the plastic as much as possible, look for biodegradable alternatives or give up plastic altogether? As outlined above it seems that there is generally a price to be paid in terms of  cost and extra work for the growers. There are also items such as polytunnels that are hard to do without but perhaps better recycling is the answer there? While most market gardeners I know won’t appreciate extra financial costs or time pressures, my hope is that over time customers will vote with their feet and be willing to pay extra for produce that is less plastic-reliant. Without that support it is hard for growers already operating in challenging conditions to make the leap.