more and more sensors in the greenhouse

"Each action you perform has a certain real time effect on the plant that we cannot perceive with our naked eyes, but with sensors we can see how the plant really reacts to all external influences. The stem and leaf are made up of cells that will fill or deflate depending on the stress situation of the plant." Speaking is Maxime Dedecker with 2Grow. The young Flemish company launches their PhytoClip mini sensors, making it possible to measure the diameter of the leaves and the stems. "We are able to map a stem of 0-6mm and leaf thickness of 0-2mm with a precision of less than 1µm in an accurate and temperature corrected way."

Evaporation
Maxime explains how a plant, when evaporating water, will look for the easiest way to replenish it. "As a result, the plant will not only use water from the soil to satisfy the evaporation, but it will also use part of its cellular reserves for this purpose. The more the plant draws from its reserves, the harder it will have to work and the higher the plant's stress."

By following the variation in the thickness of the stem and leaves closely, you can see whether the plant is able to grow and replenish its reserves (for growth a cell needs enough turgor), whether it is experiencing too much stress and is therefore slowly draining its reserves.

"These sensors also allow smaller plants such as strawberries, lettuce, herbs and also increasingly more ornamental plants to be measured", Maxime adds. "Basically, I think that almost every plant with a leaf will be measurable."

Plant stress
For a number of years now, the company has been working from Destelbergen on paving the way in greenhouse horticulture and steps have also been taken in outdoor cultivation. By focusing on the plant and not only on its surroundings, a lot of knowledge has already been gathered. For example, about the occurrence of plant stress.

"With the naked eye, we as humans often discover too late that a crop is under stress," explains Maxime. "With good data, a grower can find out, for example, the tipping point at which a plant switches from vegetative to generative. A grower can then adjust his cultivation strategy accordingly. And on what basis does a grower determine the start of the first irrigation? As explained earlier, he data from our sensors shows when the crop really starts to need water." 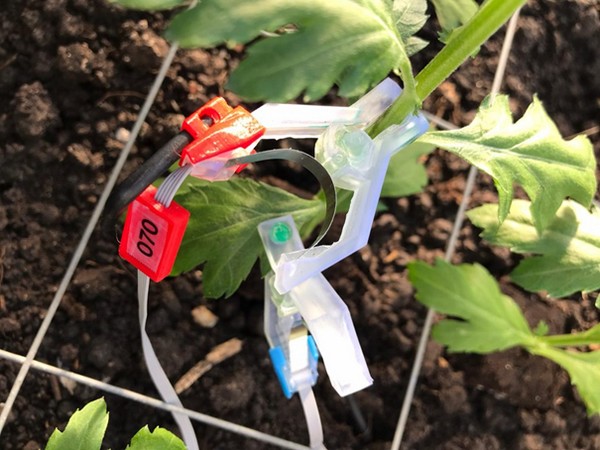 Built-in calibration
2Grow's sensors show the thickness of stem and leaf. Until recently, this required a minimum thickness of about six millimetres for stems and the leaf, which was often simply too thin to allow a good measurement. "The PhytoClip sensors now make it possible to accurately monitor plant growth from the start," says Maxime. "You can now see when a leaf changes from a growing pattern to a pattern in which a leaf shrinks in diameter daily. This may later translate into new applications around leaf picking".

Also stems with a diameter between 1-6 millimetres and leaves with a thickness between 1-2 millimetres can now be mapped with a precision of a few micrometres. Existing sensors for small diameters and leaf thicknesses tested by 2Grow did not always succeed in the latter. "At varying temperatures, certain materials expand or shrink. When small distances have to be measured, that really makes a difference".

Phyto-IT, 2Grow's supplier, has therefore equipped the Phytoclip sensors with built-in temperature compensation to provide more accurate and reliable measurements in fluctuating temperatures. "Both the choice of material and the method of measurement ensures that the temperature component is filtered out of the measurements," says Maxime. "An additional advantage of the sensors is that they are easier to mount and also allow more robust installations than current systems.

Two sensors
2Grow rents out the sensors in an annual package that includes hardware/software and service. Two sensors can be connected to each kit, allowing the grower to measure twice stem diameter, twice leaf thickness or a combination of both.

The data can be linked to climate computers from Priva, Hoogendoorn, Hortimax and platforms such as LetsGrow and Zensie. An API is also available so that integration of the data in the growers' own platforms is also possible.

From left to right: Nicolas, Wouter and Cyrille, the three new faces at 2Grow.

New sensors, new faces
In addition to a new sensor kit, 2Grow also has new faces. In October Nicolas de Vriendt started at the company. He is going to focus mainly on service, because 2Grow has noticed that there is a great demand from growers for support in interpreting measurements.

Wouter De Bruycker is also new to the team to support the sales team and take on the day-to-day management, as is Cyrille Bizien, son of French grower Thierry Bizien (SCEA Ty Glas). The latter is in charge of supporting growers in France in the application of sensors in their cultivation.