"Breakthrough cultivation on water nearby"

Growing crops in soil is traditionally the case with lettuce and cut flowers. But climate change, more extreme weather and increasingly stricter requirements for emissions, quality of groundwater and crop protection products, cause growers to look for other solutions. Growing on water can be the groundbreaking, clean alternative, Jan Botman from Botman Hydroponics and Matthijs Blind, researcher at Proeftuin Zwaagdijk, are convinced of this.

Both men have been testing cultivation on water for years. "Crops do not reach into the ground with their roots, but in water that is enriched with nutrients. That saves, among other things, in weeds, the risk of diseases and the product is sand-free. Furthermore, as an employer you are more desirable because people no longer like work in the open field," Blind sums up.

Complex
"The importance of aquaculture in horticulture is therefore great. The possibilities are being fully investigated and developed. Provided the conditions are good, it is amazing how many plant species can form roots in water. It is now a matter of scaling up this cultivation approach and make production cost-effective, and that is harder than it sounds."

Jan Botman started in 2007 with 'his mission'. Proeftuin Zwaagdijk gave him the space to do his own research. "Beforehand we thought: we will do that in just a few years. It’s twelve years later and many variants have been reviewed. It turns out to be very complex. Only since two years ago we have had models with which we want to continue with." 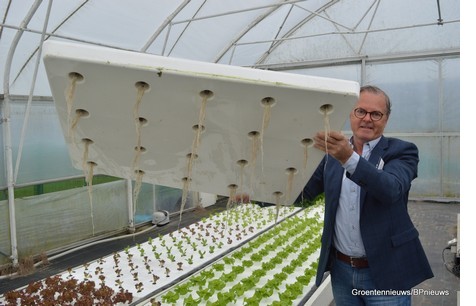 At B4Agro in Warmenhuizen, among others, the Botman Hydroponics system is now in operation. The essence lies in aeration and flow of water, as Jan revealed at Seed meets Technology last year. The next challenge now is cut flowers.

Read more about it in Dutch here.