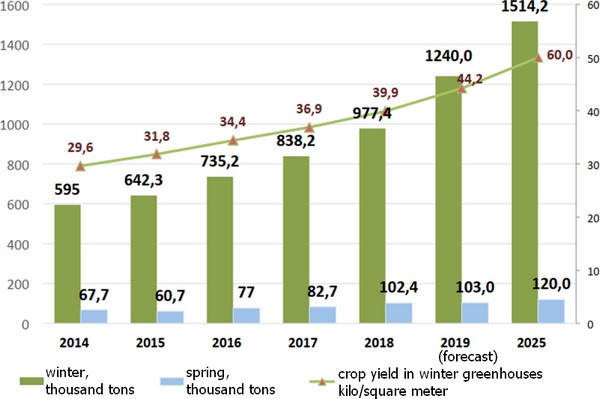 Vegetable supply of the population of the Russian Federation in the season in 2019 should comprise 60% (53% in 2018). Local greenhouse vegetable production significantly vary depending on the country region, which is related to the geographical preferences of new major industrial projects’ investors. The highest rating in the off-peak season has been shown in the Northern Caucasus, Southern and Central federal districts. 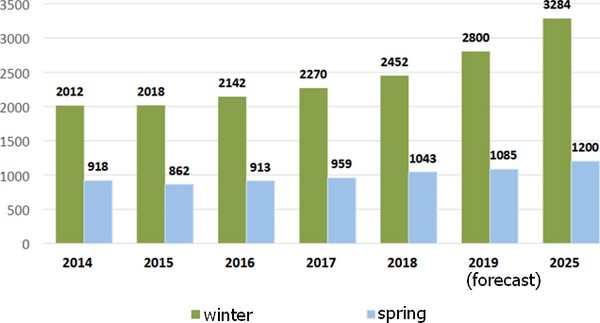 According to the official data of the Federal Service of State Statistics, the average price on cucumbers for the period of January – October 2019 has reached 1.14 euro.

Graph 5. The average selling price on tomatoes in 2018

Graph 6. The average annual selling price on tomatoes in 2019

Annually almost all kinds of fresh vegetables are imported in the Russian Federation from all over the world. In 2014-2015 due to the product embargo, import volume has decreased in all segments, including greenhouse vegetables and greenery. The whole 2015 was characterized by the active reshaping of the imported vegetables. The changes were related both to the supplying countries and to the vegetable sale prices as well as to the variety of produce and its quality. However, in 2017 for the first time in 3 years vegetable import started growing again.

The tendency continued in the third quarter of 2019. Thus, tomato import amounted to 419.5 thousand tons and that of cucumbers to 62.6. thousand tons – see graph 7.

The final results of the year will appear at the end of February 2020.