It is generally believed that the domestication and breeding of plants has led to genetic erosion, including loss of nutritional value and resistances to diseases, especially in tomatoes. A group of researchers studied the diversity dynamics of greenhouse tomato varieties in NW Europe, especially The Netherlands, over the last seven decades. According to the used SNP array, the genetic diversity was indeed very low during the 1960s, but is now eight times higher when compared to that dip.

The pressure since the 1970s to apply less pesticides led to the introgression of many disease resistances from wild relatives, representing the first boost of genetic diversity. In Europe a second boost ensued, largely driven by German popular media who named poor tasting tomatoes Wasserbomben (water bombs). The subsequent collapse of Dutch tomato exports to Germany fueled breeding for fruit flavor, further increasing diversity since the 1990s.

"The increased diversity in composition of aroma volatiles observed starting from 1990s may reflect the efforts of breeders to improve fruit quality. Specific groups of aroma compounds showed different quantitative trend over the decades studied", a group of researchers now concludes. "Our study provides compelling evidence that breeding has increased the diversity of tomato varieties considerably since the 1970s."

Beneficial traits
A recent paper in Nature Biotechnology on de novo domestication of tomato voiced the general belief that “breeding of crops over millennia for yield and productivity has led to reduced genetic diversity. As a result, beneficial traits of wild species, such as disease resistance and stress tolerance, have been lost (…). Despite the increases in yield conferred by domestication, the breeding focus on yield has been accompanied by a loss of genetic diversity and reduced nutritional value and taste”. 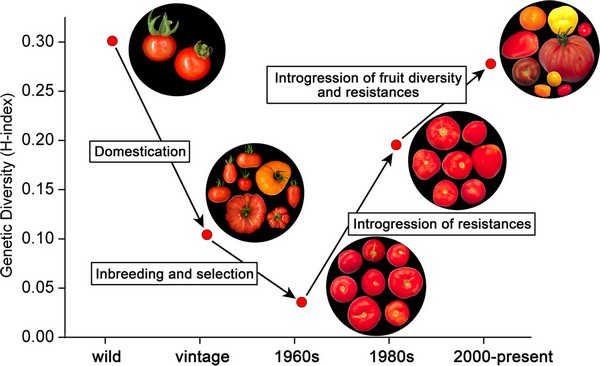 Reduction of diversity among crop varieties poses risks for cultivation, especially when most varieties carry the same genetic basis for resistance to diseases and pests. If a disease resistance is overcome in one variety, other varieties become susceptible too. This leads to agricultural vulnerability which can affect the entire chain, especially if there are no alternatives for disease control, such as appropriate, authorized pesticides. History has provided several examples, such as the Panama disease (Fusarium oxysporum f. sp. cubense) epidemic in banana, or the southern corn leaf blight (Helminthosporium maydis) outbreak in maize. Because the number of authorized pesticides has decreased and continues to decrease, crop protection has to rely more and more on resistances that should have not a narrow genetic basis.

The loss of genetic variation in crops due to the modernization of agriculture has been denoted as genetic erosion. During domestication preferred genotypes were selected, leading to loss of alleles and a decrease in genetic diversity of landraces compared to wild accessions. Two principal occurrences affecting crop diversity have been identified: 1) the replacement of landraces by commercial varieties; and 2) more recent additional changes in the diversity of commercial varieties caused by plant breeding. Breeding can reduce genetic diversity by continued selection in the breeding germplasm, or may broaden genetic diversity through the introgression of alleles from wild relatives. The question remains whether the increase in diversity because of introgression has compensated the reduction of genetic diversity due to inbreeding and selection.

Researchers have studied this for tomato, as particularly in this crop there have been indications of serious genetic erosion. Furthermore, Tieman and Klee mentioned that “modern commercial varieties contain significantly lower amounts of many (…) important flavor chemicals than older varieties” as a result of intensive selection for production traits, such as yield and disease resistance, at the expense of flavor. The researchers studied the evolution of diversity of commercial tomato varieties in NW Europe since the 1950s. To do this, they looked at both genetic variation at the DNA level, and phenotypic variation, including disease resistances, fruit size, and flavor components.

Access the full study at Frontiers in Plant Science.