"Geothermal project Trias was too good to resist"

Greenhouse company Rimato in the Dutch town of Honselersdijk grows TOVs on a surface of over 14 hectares. Since the last six months, Rimato has been receiving geothermal heating through Trias Westland. Co-director Marcel van der Knaap: “We actually didn’t even need geothermal heating, but Trias is a cooperative project which I am really impressed by and wanted to become a part of by joining.”

In 2017, 49 Westland greenhouse horticulture entrepreneurs joined forces and committed themselves to the development of Trias Westland, an innovative geothermal heat project to make greenhouse horticulture in Westland more sustainable. Now, more than two years later, with the commissioning of the first doublet in July 2019, 26 connected participants receive heat from a geothermal heat source in the Lower Cretaceous layer at a depth of 2.3 kilometers. 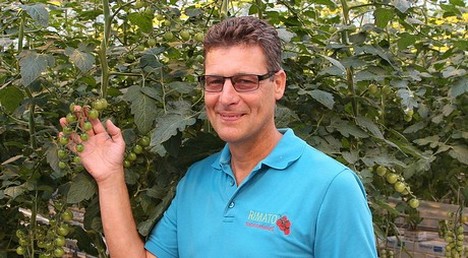 What is your energy management like?
“We have three CHPs with a combined power of 8.7 MW worth of electricity, which we use for assimilation lighting. Besides that, we have a more than decent heat buffer, which makes us very flexible as well as a small boiler, but that one is mainly meant as a back-up. So we didn’t, and actually still don’t need geothermal heating.”

Then why has Rimanto decided to join Trias Westland anyway?
“It’s a cooperative project which I am really impressed by. It’s not a few individuals that organize it, but a real cooperative initiative. Another reason is that we cultivate honey tomatoes, which has as one of its core principles that we work with care for mother earth and the young generations. Sustainable energy is a part of that. We, for instance, also have over 1,400 solar panels on our roofs.”

In what way do you use the geothermal heat?
“Our CHPs run fewer hours and relatively speaking we don’t use much geothermal heat on 14 hectares with the 1 MW-connection. We only wanted to take care of part of our base energy needs. The physical connection that we have to Trias is not extremely large, but still three times as large as we currently use. We did so with the future already in mind.”

Will you then be increasing the amount of geothermal heat you use soon?
“With the introduction of the Sustainable Energy Storage act (ODE) on January 1st, we will need to recalculate. We do, however, understand that geothermal heat is not cheaper than our CHPs, but our tomatoes will still need to be able to compete with the rest. Increasing the amount of geothermal heat we use is not something we will do after the 1st of January, but we might do so later on. In the meantime, I hope people will lobby well against our ‘dear government’.”