The thrips is a pest insect dreaded by horticulturalists. Rob van Tol
has designed a trap for catching the insects using LED light. But
what light composition are they most attracted too? It turned out
that Dutch and German thrips have different ideas about that.

In the giant greenhouse at the chrysanthemum nursery G&C Flowers in Gameren, the Wageningen entomologist Rob van Tol displays a cube. This is the prototype for a new generation of insect traps that he is going to test here on thrips, a pest that causes damage to a range of crops, from cut flowers to courgettes and bell peppers. The hope is that he has found an alternative to the flat, coloured sticky boards that many growers still use to monitor and control their pests. ‘Of the thrips that are attracted to a coloured board, only between five and 15 per cent actually land on it. The rest escape. Why is that? Apparently there is something wrong with the trap. The insects come towards it, but once they get close they lose their way and get disoriented. The few that do land are the “crashers”, the losers who more or less crash into it.’

The sticky boards are useful for monitoring insects but not really for capturing them in large numbers. And yet that must be possible, thinks Van Tol. ‘Actually, so far all the research on insect traps has mainly been empirical. The whole spectrum of colours has been studied for attractiveness to insects but no one has gone into it in greater depth. What do insects actually see? How do they orientate themselves, and which aspects play a role in that? I want to use that basic knowledge to create better traps, the kind that insects do decide to land on.’

Causing damage
Several species of thrips are found in Dutch greenhouses. Horticulturalists currently fight them by setting natural enemies such as assassin bugs on them, or by spraying them with – increasingly ineffective – pesticides. With funding and support from the horticulture organization LTO-Greenhouse Horticulture, Koppert Biological Systems, Lincoln University in New Zealand and the Horticulture Top Sector in the Netherlands, Van Tol has been working for over two years on what he has begun to see as his life’s work: the LED trap for the highly destructive Californian thrips. His prototype is the cube which consists of eight sections, each of which can be lit up separately with LED light of different colours and levels of intensity, and with combinations of these. 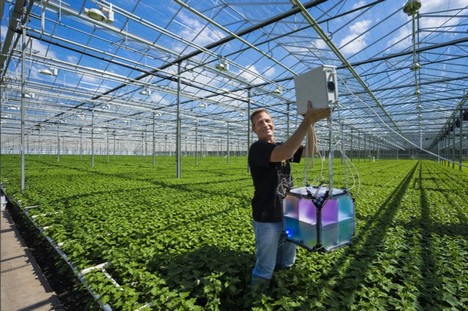 In a wind tunnel, Van Tol tested the behaviour of thrips when exposed to LED light in this palette of colours. Two infrared cameras made it possible to record the route of each insect in 3D. This setup has already delivered some remarkable findings. One example: thrips always approach a trap from downwind. Van Tol: ‘They always land against the wind. They can fly with the wind in their backs, but they can’t land. So they fly past the trap and turn to fly into the wind.’

Preference for yellow
This may seem a trivial point, but it is not, says Van Tol. ‘This is important for designing a good insect trap. The trap must not be flat but three-dimensional so that it is possible to land on it from all sides. That makes the trap more efficient.’ It also transpired that thrips prefer yellow light to blue. Which is interesting, given that blue boards are often used to lure the insects in greenhouses. Moreover, German researchers found a preference for blue, and this held even when the German thrips were tested in Wageningen. ‘The insects reacted in the same way as in Germany, says Van Tol. ‘So it was not due to a difference in the experiment. It is also clear that the host plant on which the thrips are bred plays a limited role. Another explanation might be genetic differences between the two families of thrips.’

To get to the bottom of this, a new series of tests using the LED cube is planned to study the effect of all the possible combinations of yellow, blue, UV and green light. And to complicate matters even more, the hunger factor might play a role too sometimes, says Van Tol. ‘Thrips fly towards yellow because they are hungry and they think it is a flower they are seeing. But a thrips that isn’t hungry might be drawn towards blue. So maybe you need several colours to catch all the thrips. We can figure all that out with the new LED trap.’

Besides colour and contrast, patterns play a role in the orientation. Van Tol shows us his latest toys: LED lights that produce a pattern of concentric circles, stripes or dots. The researchers are pulling out all the stops to seduce the insects into landing. Researchers at Lincoln University working for the Wageningen thrips project on a study of how the insect’s eye works (see inset). The aim is for the insect trap of the future to be the perfect lure.