The Netherlands and Vietnam have been working closely together in the field of agriculture and horticulture for many years and have formalised this in a Strategic Partnership Arrangement (SPA). The Vietnamese Minister of Agriculture and Rural Development, Nguyen Xuan Cuong, visited World Horti Center in Naaldwijk on 10 December in order to further intensify this collaboration. Accompanied by a 35 member delegation, he immersed himself in the latest developments in the field of horticultural innovation and education at the World Horti Center. Bouke Arends, mayor of the municipality of Westland, welcomed the minister and his entourage. 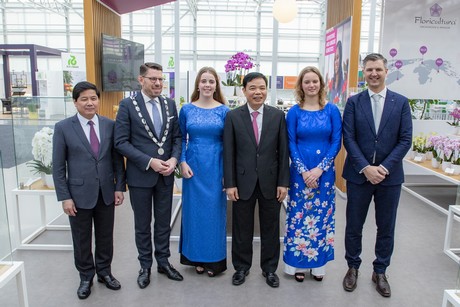 The Minister and his delegation were particularly interested in how the Netherlands organises the supply chain from grower to consumer. In Vietnam, the Dalat region in particular is undergoing major professionalisation in terms of horticulture. This is needed in order to meet the growing and changing consumer demand in the Southeast Asian country. Vietnam is the region’s fastest growing economy, with the agriculture and horticulture sector accounting for around twenty percent of Gross Domestic Product.

"A good relationship with the Vietnamese government plays a major role in determining the success of Dutch businesses and educational institutions in developing their position in Vietnam further. The visit to World Horti Center has strengthened this bond, whereby business, education, research and local government are represented under one roof and reinforce each other," says Angelique de Wit, who is responsible for Public Affairs at World Horti Center.

Minister Cuong was given an explanation of the role of World Horti Center and the municipality of Westland’s unique position within global greenhouse horticulture. In addition, Henk van Eijk (Kenlog) gave a presentation about the Netherlands Vietnam Horti Business Platform, in which Dutch and Vietnamese companies work together to support the further development of the Vietnamese horticulture and floriculture sector. The collaboration between Lentiz | MBO Westland and Vietnam was also discussed, including a contribution from two students who have just returned from an internship in the country.