Spain is sandwiched between increasing competition from the North and South

There are early starters and late starters. But by the time November comes around, most traders in the Netherlands switch to Spanish products. This is the way things have been done for years, and it will not change any time soon. What does change every year is the acreage and competition from other countries. Then there is also the ever-changing weather. These are enough factors to be able to take a look ahead to the 2019/2020 fruit-vegetable season. 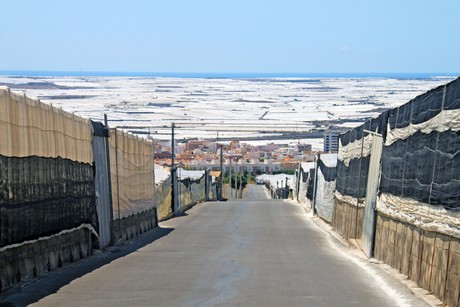 Spain experienced massive downpours in the second week of September. That is how this year’s season started in that country. At least, in the region surrounding Níjar in the Southeast of Spain. This extreme weather affected about 200 hectares of greenhouses. These were seriously damaged.

“Terrible for those affected. But, the total acreage in the whole of Spain is about 31,000 hectares. This, therefore, had a limited effect,” says Jan van der Blom. He works as an entomologist at the Spanish production organization, Coexphal. “Part of the crop was lost by farmers there. However, you will not see this influence the total harvest,” he says with conviction.

The affected growers cultivate mostly tomatoes. It is precisely this crop's acreage that has been gradually shrinking in Spain in recent years. This decline continues this year, and the area has dwindled by about 1,000 hectares. An important reason for this, according to Jan, is the rapid, explosive increase in Spain's minimum loans. These rose by about 20% in a single year. “Combined with the already small margins, this caused problems for Spanish farmers. Especially with a crop like tomatoes. These are more labor-intensive in Spain than, for instance, bell peppers, cucumbers, or aubergines.”

Chalk being washed off the greenhouse roof

Tomatoes are becoming less profitable
These three crops are the ones Spanish farmers have focused on this year. Their acreages have grown. Importers in the Netherlands have noticed this even at the start of the season when volumes are still limited. Prices for aubergines and bell peppers, in particular, have been very low since the season began in September. These low prices led to protest action among the growers in Spain. These protests have become an almost annual occurrence, fueled by an increased supply. Farmers who switch between different crops cause these increases.

There is another contributing factor to this season’s dismal start. Planting was done earlier, says Ton Bouw of Hagé International (see foto). This company imports goods for The Greenery. “It is a fact that farmers started a week or two earlier than last year. There are several reasons for this. On the one hand, as always, there is the weather. It was perfect in Spain this summer without any extremes. That is excluding the massive amount of rain near Níjar. "On the other hand, there is a trend in, particularly, bell pepper cultivation. Growers start planting earlier. This year also saw bell pepper farmers skipping the melon crop rotation. As a result, they could begin their bell pepper cultivation even earlier.”

Bell peppers have been doing reasonably well in Spain in recent seasons. This is also contributing to the shift in acreage. After a good year and, certainly, after a few good years, growers see opportunities. “Tomato farming is becoming less profitable in Spain,” says Ton. “You could, in fact, say things have been looking lousy for the last few years now. “

Added to higher minimum wages, Spanish tomato growers have to deal with increased competition. This competition comes from Morocco. The lit-cultivation acreage in countries like the Netherlands, Belgium, but also Germany and Poland, is on the rise too. Spanish farmers, themselves, in particular, consider the South with suspicion.

“Morocco has exactly the same production schedule as Almería. It is just that labor costs are lower in Morocco.” That does not sit well with the Spaniards, who have, therefore, called for emergency regulations to be put in place. “Morocco sells tomatoes to Europe. Spanish growers have noticed that, far from being a united Europe, nothing is being done about this,” explains Ton.

More and more specialties
Ton thinks the Moroccon cultivation's influence must, however, not be exaggerated. “Tomatoes are still the most important product in Morocco. But, where Morocco is growing more tomatoes, the acreage is shrinking in Spain. These two countries are, therefore, canceling each other out nicely. This is generally good for the market. Spain will, however, remain the most important player in the coming years when it comes to fruit-vegetables in the winter.”

And not only when it comes to the bulk production of these products, Jan observed last season already. He took a tour through the Spanish fields. “The number of specialty tomatoes is increasing across the board. These now amounts to about 20% of the total tomato acreage in Spain.” On the other hand, cherry tomato cultivation has fallen the most, according to Jan. “This is very clear, thanks to the labor story, which is cheaper in Morocco.”

Spain may be a large country, but its total fruit-vegetable cultivation is enormous. It is, therefore, not strange that roughly 70% of all the products in this category are exported. Germany is the main destination, with this country’s leading retailers being the most important clients. “The group of clients growers can supply keeps shrinking,” Jan notices. “That makes it almost impossible for farmers to have any input in price formations. The supermarkets are very powerful.” 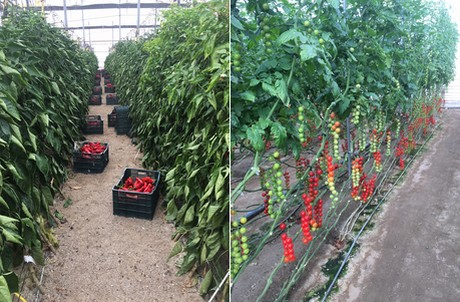 “The supermarkets also, in fact, decide when to switch to Spanish products,” adds Ton. “By mid-November, Germany had been getting fresh produce from Spain for weeks. England and Scandinavia are done by then too.” The same goes for some importers, including Hagé. This company is one of the largest in terms of Spanish fruit-vegetables. “We have always started early, as one of the firsts,” says Ton. “We even have courgettes, one of our top Spanish products, available throughout the year.”

Counter-cultivation
The year-round demand for products has always been the reason importers are so busy during the winter. Then tomatoes, bell peppers, and what-not must arrive, not just from Spain. These include an increasing amount of organic products, according to Job van den Berg of Bio Montaña. This company is a Spanish subsidiary of the Dutch Bio World, which, in turn, falls under the Best Fresh Group.

“A lot of organic goods are added every year. That is good. You see supply and demand increasing, with, especially, the supply fluctuating. This fluctuation is due to the weather.” The heavy rain experienced in the areas around Níjar in Spain in September is a prime example. That rain was a ‘decent stream’, according to Job, and it hit several tomato growers including organic ones. “Production started later because the replanting was later than usual. So, you saw good prices, especially in October. That was, however, short-lived. At the start of November, the prices dropped as production increased again.”

Wat strikes Job is the many growers who plant extra in the year following a good year. This trend brings about the accompanying shift in acreage. This is logical, but perhaps not always the smartest choice. “In my experience, Spanish farmers generally grow whatever did well in the previous year. Sometimes, it would be better if they would resist doing this or do counter-cultivation. They should choose a crop that most of the other farmers are walking away from.”

The Spanish farmers’ flexibility is enhanced by the greenhouses they use. These are often structures that have not been designed for one specific crop. Another type of plant can ‘easily’ be grown in them. On the other hand, growers, and, indeed, organic growers are tied to specific regions. Based on figures released by the Andalusian authorities in 2018, 10,2% of growers are certified organic. This number keeps increasing significantly, according to Jan.

“Not every region is suited to every kind of farming. For example, Motril is a good cucumber region, and Níjar is not. This all has to do with the quality and salinity of each region’s water. The climate and day/night temperature differences also play a role. Not all crops can withstand these as well.”

Here again, the word ‘weather’ is mentioned. If the winter season plays along, it might become a good year. September and October are traditionally the overlapping production periods. These are now over. Importers are used to this overlap and know it is part and parcel of the market in which they are active.

However, they also understand that Spanish growers see it differently. “It is always difficult when there are a lot of products on the market at the same time.” And with the changes in acreage and the ever-increasing competition of the North and South, risk cannot be ruled out.