While Russia has been one of the most remarkable growth markets from a horticultural point of view, the attention has shifted a bit to surrounding countries. This development is also seen at the 4th annual event International Greenhouse Complexes Russia and CIS countries. Over 70 managers of commercial greenhouses and investment projects from Kazakhstan, Belarus, Uzbekistan, Armenia, Azerbaijan, Tajikistan, Turkmenistan, Kyrgyzstan and Moldova are meeting up today in Moscow, at the start of the event. The Forum is supported by the Ministry of Agriculture of the Russian Federation - which this morning, during the start of the forum, was asked many times about the support for the industry.

The Russian industry has seen strong, government supported growth in the past decade. However, the subsidies have been lowered and nowadays are adjusted to a system where loaning money to invest is supported by the government. During the start of the forum, the industry shared a vision of what they need - also government support on the electricity prices, since these have risen tremendously in the last couple of years. During the opening session of the forum it was stated by Guriy Shilov that it becomes necessary for growers to build their own brands and to create better margins.

Although still growing at rapid pace, the adjustments in the government support program and the higher energy prices seem to slow down the expansion of the Russian industry a bit - something that is answered by an uptick in the growth of horticulture in the CIS countries. According to Aleksey Shemetov, the circumstances in these countries are favorable: the lighting and temperature conditions are suitable for growing. 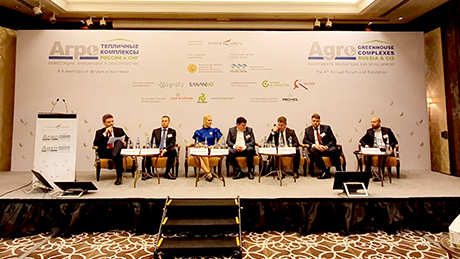 CIS Countries
"For the CIS countries there are plenty of opportunities for expansion of existing greenhouse capacities for vegetable growing to reach self-sufficiency and start exporting to replenish the budget", the team with Vostock itself explained on the eve of the event. "For example, 200 million dollars will be attracted from the international financial institutions for the construction of new greenhouse complexes in Uzbekistan. The expected level of import substitution of greenhouse produce by 2020 in Belarus comprises about 520 million dollars."

And these developments are also shown amongst the participants in the forum. For example, the company ХО Ýigit (Turkmenistan), a greenhouse complex for tomato production, currently grows on 34 ha. There are plans to commission 30 ha of greenhouses for sweet pepper, cucumber and aubergine farming by 2021.

In Armenia, Green Food is one of the remarkable players, growing strawberries on 3 ha. There is an investment project on the construction of a greenhouse complex occupying 6 ha.

Lighted greenhouses
Amongst these projects many are illuminated and the light suppliers are convinced the end of the market is not yet in sight - which is probably why of all the suppliers, they are most abundantly present. It is estimated that nowadays 30% of the Russian acreage is illuminated and even though electricity prices have risen, this percentage is still growing. 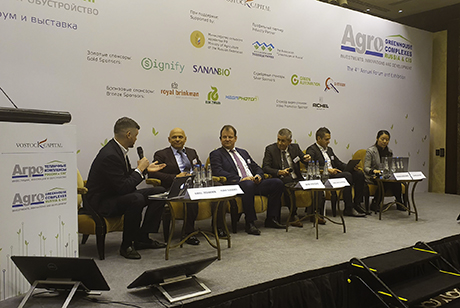 Today and tomorrow the conference will update these participants on the developments in the market and on the opportunities of high-tech growing.