Grower, Kees Hendriks, explains how he managed that

Kees Hendriks is a cucumber grower in the Netherlands. His first crop of lit cultivation cucumbers has been early for years. He has, however, never been able to harvest in November. Until now. Something extraordinary happened yesterday, on 27 November. The first Qcucumber cucumbers could already be sold at auction at The Greenery.

And within a few years, they expect to be able to supply Dutch cucumbers year-round. "I am up to the challenge now already, thanks to my cultivation techniques. But, to bring the market up to speed, we have to bring the season forward gradually," says Kees Hendriks.

Well lit, but not too well
Kees farms with lit-cultivated cucumbers in two greenhouses. These total an area of 6.1 hectares. This year is just a little different again to last year. Then, the first cucumbers were cut on 12 December. To be early, light, in particular, is needed.

“We adjusted this year's 'light recipe' slightly. It is actually logical. If you want to be on the market even earlier, you must start earlier. There is still more natural light then. Last year, I reached 20 hours of light quite easily. This year, I started on 19. I only increased it to 19.5 hours in the past few days. I am still considering whether I should go to 20." 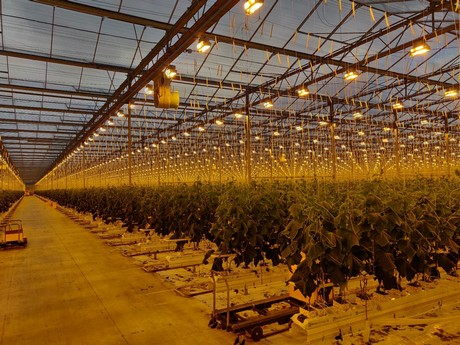 A peek into the greenhouse at week 47. Source: Nick Rietveld

Kees noticed that it seems the crop reacted well to the switch to 19.5 hours of light. That is important. "You want to find the cut-off. But, you also do not want to test the plant's limits too much. I want to get onto the market earlier. However, I want to continue just as long as before too. I like quick cultivation, but you must not want to go full speed ahead."

This year, the level of light and accompanying stem placements were other things that were adjusted. "Last year, there were still old bulbs hanging in the fixtures of the early greenhouse. There, I, therefore, opted for a larger distance between plants. There were 2.2 stems/m2. Enough light had to reach the plants."

"These bulbs have been replaced. I now have a stem spacing of 2.5 in both greenhouses. I am cultivating the cucumbers under 190 micromol SON-T lights,” adds the grower.

A different variety
The lighting is important. However, much ultimately depends on the type of cucumber. This has also changed since last year. "I swapped the Hi Power variety for the RZ 24-282. I have been testing this variety for two years already. When it comes to production, it equals the Hi Power."

"I also see a few advantages to it. This cucumber variety seems to be less sensitive to Pythium. It also bears slightly fewer double fruits. I think its fruit is also less sensitive to Mycosphaerella,” explains Hendriks.

Each variety does, of course, have its disadvantages. "This variety is more sensitive to Mycos in the head of the fruit. This is in contrast to less Mycos in the actual fruit. But, it also grows in length faster. I, therefore, need to put less effort into that. I do think I will pocket more, on average." 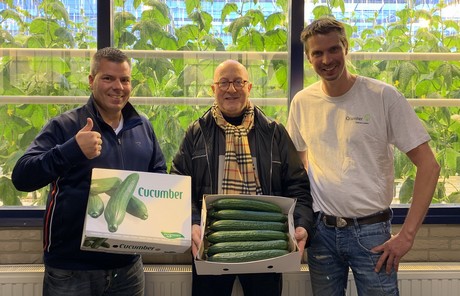 Year-round in on the cards
Now that the first cucumbers have been cut, the season can begin. On Wednesday, the first box was sold in aid of charity. It went to the Dutch company, VOF de Best, for €1,200. The Greenery's cucumber farmers doubled this amount to €2,400.

Kees is pleased that he was successful again. He is looking forward to doing more experiments. He wants to get onto the market early. "It is technically already possible to grow Dutch cucumbers year-round. That, of course, involves new challenges."

That is true for both cultivation techniques as well as product marketing. "Our biggest advantage over imported cucumbers is reliability and a constant, high-quality supply. That is evident from the fact that certain companies have been loyal to us for several years. These include Dutch supermarket chains, Hoogvliet, and Jumbo."

"But, you see demand from overseas retailers is also on the rise. Add a few more parties, and we can certainly make the move to supplying cucumbers throughout the entire year in the years to come," concludes Kees.