Did you know that in Slovakia there is the largest bumble bee production in the world? 820,000 hives are being produced yearly in Nove Zamky by the Dutch company Koppert Biological Systems to be used as natural pollination in mainly greenhouse production of tomatoes and pepper but also for open field production such as orchards.

On October 22 the Ambassador Henk Cor van der Kwast and Agricultural Counsellor Carolien Spaans visited the facility which has already been in Slovakia for more than 20 years. The company was founded in the Netherlands more than 50 years ago by founder and cucumber grower Jan Koppert who was dedicated to finding natural alternatives to using chemicals in agricultural production after experiencing allergies himself to those products. Now the company is a leader in biological crop protection and natural pollination with their solutions being applied in more than 100 countries. In Nove Zamky you can see the complete life cycle of the bumble bee including the handpicking of the queens, workers and males to start a new beehive. Using the bumble bee as natural pollinator is contributing to a sustainable and healthy way of production. 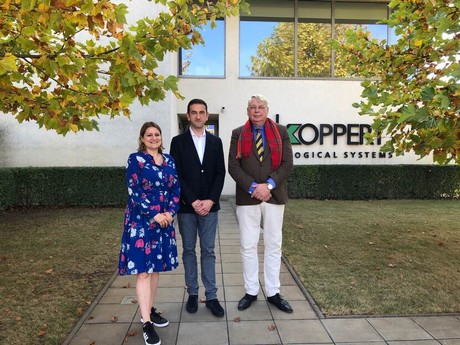 The structure of the agricultural sector in Slovakia is, due to the history, different compared to the Netherlands. More large scale production is taking place which at the same time can be improved in efficiency. About 60% of the food items are being imported and the number of livestock has reduced in recent years due to competition from countries that can produce with lower costs. Also, African Swine Fever is present in the country.

The ministry of Agriculture is therefore going to launch a promotion campaign on November 7 to promote Slovak food products both to consumers in Slovakia as well as abroad. Joint stands at international exhibitions such as the fair 'World of Private Label' in Amsterdam from 26-27 May 2020, are being supported by the government.

During the introduction visit, points for cooperation in the agricultural sector were discussed with the Ministry of Agriculture, the State Veterinary and Food Administration, the embassy of the Netherlands in Bratislava and the Netherlands Chamber of Commerce. In the coming years, focus will be on the flower sector, circular economy and knowledge exchange with the educational institutions.