F. Sánchez, of Onubafruit: "We couldn't have such potential if we didn't have so many producers"

"Retailers continue to grow and they need increasingly large suppliers"

The raspberry campaign is already in full swing for the second-grade cooperative Onubafruit, a leading Spanish company in the production and marketing of berries.

“We surely have the best raspberry varieties on the market, which we produce exclusively. Research and development are essential for us, so we are working together with breeders in the development of our own exclusive or club blueberry and strawberry varieties,” says Onubafruit manager Francisco Sánchez.

This campaign, they expect to produce more than 13,000 tons of exclusive raspberry varieties, about 40,000 tons of strawberries, which are still being replanted, and 17,000 tons of blueberries, which are currently imported until the Spanish harvest begins. The kaki harvest is also starting right now, and they are the largest producers in Huelva, with more than 10,000 tons per year. Around 15,000 tons of citrus fruits and 700 tons of pomegranates complete its range of products.

“We couldn't have such potential if we didn't have so many producers; that is certainly one of our strongest points. The supermarket chains continue to grow and expand, so they increasingly need larger suppliers that can guarantee a reliable supply,” says the manager of this company. "We are the largest in Huelva and we aim to retain that status."

Its export destinations are mainly in Europe, although they also continue to grow in Asian markets such as China, Singapore, Hong Kong or Malaysia, among others. “We are still waiting for the approval of the protocol that will allow us to ship kakis and blueberries to China. I think that, in Spain, the process to open new markets is quite slow, compared to other countries.” 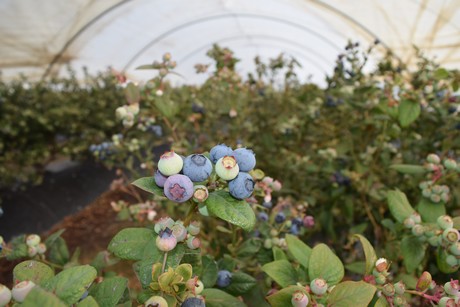 The company is also investing in expanding its range with exotic fruits. “We already have 200 hectares of avocados, which will become productive next year, and we are looking into the cultivation of other exotic fruits, such as mango, for which we see a lot of potential in Huelva, as well as pitahaya or dragon fruit,” says Francisco Sánchez.

“We want to produce more and more sustainably. We are aware that the future relies on that. We are marketing fruit containing less waste, produced in a more environmentally-friendly manner. Furthermore, we are gradually reducing the use of plastic in containers.”

Onubafruit will be showcasing its new image at Fruit Attraction, at stand 9E11.