The limited amount of light in winter means that growing cucumbers in Finland isn't a simple task. To be able to produce year-round, the use of grow light is a must. "And the light intensities installed in these regions are on average many times higher than most of the world's horticultural regions," says Paul van der Valk, Area Sales Manager Europe at Hortilux. "In the Netherlands around 110 micromoles is often installed, but in Finland it's usually three to four times as much."

More light, the same energy requirements
Lighting is also the norm for cucumber-grower Jan Lindberg. He, his wife Nina and son Kim run Malax Trädgår, a business based in the town of Malax in the middle of Finland. “A few years ago it was clear that the grow light installation in our 1.9-hectare cucumber greenhouse was due for replacement,” says Lindberg, one of Finland's top horticulturalists. “Lamps regularly stopped working, resulting in loss of production. On top of that, I wanted to increase the light level anyway, to further increase my production. However, the condition was that the energy requirements would stay more or less the same." 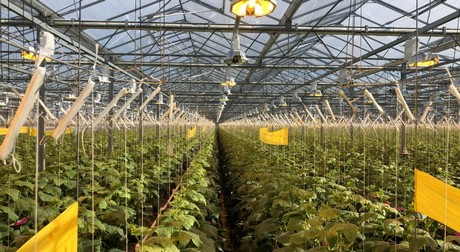 Lindberg then consulted with Hortilux staff, who came up with a customised grow light installation. It consists of NXT2 1000W fixtures, which provide 430 micromoles of light and hang at the top of the greenhouse, and Hortiled Inter as interlighting, which produces another 50 micromoles. “In contrast to the old installation, which produced 250W per m2, the new installation produces 30% more grow light. And it doesn't use any more energy; the fixtures are extremely energy-efficient. On top of that, we now have interlighting which is another step forward."

For Lindberg, the fact that Hortilux offers both overhead lighting and interlighting was an important advantage. “I also compared fixtures from various suppliers; Hortilux came out on top. And let's not forget that Hortilux is a reliable partner, with a wealth of knowledge and experience at its fingertips.”

Thirty percent more cucumbers
Lindberg began using the system, which was installed by Finnish company Elektroteam Oy, in December 2018. It is now obvious that the investment has clear added value: Lindberg's production has increased by some 30%. “I did not expect that production would increase by 30%. It's partly due to the fact that the light intensity is now higher, but it's also because we're now using interlighting. In contrast to the overhead lighting, we leave this on in the summer months. It means that we're able to harvest more cucumbers in this period. But this Hortiled Inter has a clear added value anyway: even the lower leaves of the crop are now photosynthesising.” 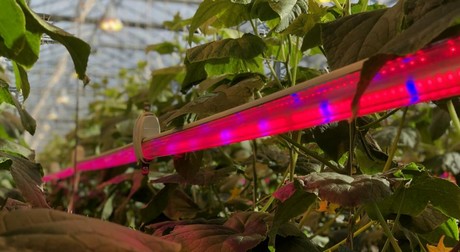 More return on grow light
In order to get the most from his grow light installation and the amount of light available, the Finnish grower will soon begin using HortiSense. This digital platform from Hortilux helps growers to optimise the yield per square metre. “Sensors in the greenhouse are used to monitor the various grow light processes. The data is collected and presented in the digital platform," Paul van der Valk explains. “With this information, we offer Lindberg tools to make even more efficient use of his grow light installation. Currently, all of the high-pressure sodium lamps are always turned on, but this might not be necessary at all times. At the beginning and end of the lighting season, it might be an option to turn some of the lamps off earlier and save energy. HortiSense also gives more insight into relevant growth factors like temperature, CO2 balance, and light extinction in the crop. This provides some additional starting points for making adjustments and optimising the use of the grow light installation.”

And Lindberg isn't on his own here: Hortilux's Grow Light Performance Consultants support the grower in this process. "Based on past results, we advise the grower on how to optimise his or her lighting strategy. By doing so, we help entrepreneurs to constantly improve and put the finishing touches on their lighting installations."