This festive season, Indian households have been struggling as the retail prices of tomatoes went up and up. In Delhi and the National Capital Region (NCR), the supply of tomatoes has been hit too. 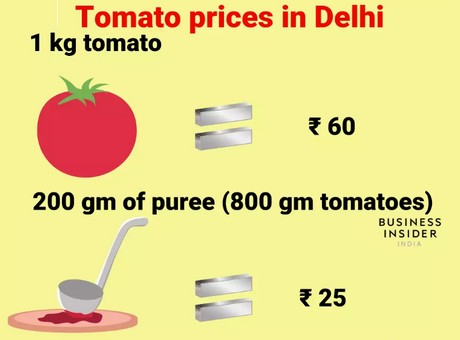 But the federal government is looking to remedy the situation. "To mitigate the shortfall in availability of tomatoes in Delhi, Safal has agreed to provide tomato puree from all its outlets in Delhi in 200 gram packs, which is equivalent to about 800 grams of tomatoes," said a press release by the Secretary of the Depal t of Consumer Affairs. This decision was taken after the chaired an inter-ministerial meeting on the issue.

Stocks of tomato puree are being moved into outlets and sales will begin tomorrow at Delhi and NCR region. The sizes of these packs are also growing. For example, a larger pack of 825 grams will also be made available, and is equivalent to about 2.5 kg of tomatoes.

But the citizens hopefully won't have to subsist on puree for a long time. The prices and supply of tomatoes were hit after erratic and extended monsoons affected tomato producing states like Maharashtra and Karnataka.

"The representatives of Ministry of Agriculture and Farmers' Welfare informed that supply will normalize in the next 10 days as monsoon rains are already receding," the Secretary stated.