Talk about a good week for the team with A.M.A. Horticulture. Last week started for them officially launching their organic cultivation container, gaining them a lot of attention at the Canadian Greenhouse Conference. Then, during the show, there was the best booth award for a technology company that they scooped up.

To complete the hat-trick, A.M.A. received the Business Excellence Award from the Leamington District Chamber of Commerce for Industrial/Manufacturing last week as well! 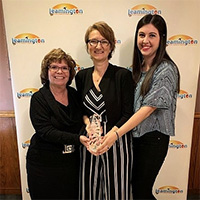 "We are deeply proud to be part of this community and to work alongside so many high-performing organizations to collectively make our region grow and thrive," said Lisa Janzen, who accepted the award with Kasi Coulter and Charlene Floreno on behalf of the A.M.A. team.

The gala took place during #CGC19, and much of the A.M.A. team celebrated in Niagara Falls. "We were sorry not to be there in person, but thrilled to see members of our team up there on the stage," said Connie Bradt. "It's all about them! This award recognizes their hard work and commitment to cultivating the future of horticulture."

A.M.A. is honoured to have our name stand alongside two other incredible finalists and thanks the Leamington District Chamber of Commerce, WindsorEssex Economic Development (award sponsor), and the anonymous person who nominated us.